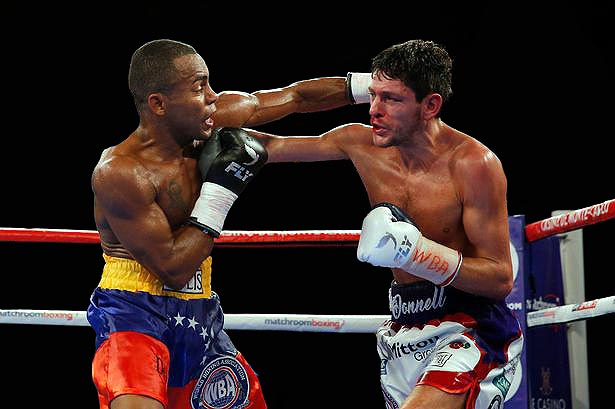 A rematch between reigning bantamweight titlist Jamie McDonnell and former 115-pound champ Liborio Solis—which was ordered nearly six months ago by the World Boxing Association (WBA)—is now penciled in for a July 3 purse bid hearing to be held at WBA headquarters in Panama City, Panama.

However, the stance might prove moot as the bout could already have a home.

The two camps were first ordered to begin negotiations on January 31, 2017, with a March 2 purse bid hearing scheduled in the event they could not come to terms within the allotted 30-day period. At the time, it was believed that a deal had been reached, only to never materialize in prompting the WBA to make a move.

Should the contest still head to a July 3 hearing, the minimum allowable bid is $120,000. McDonnell will be due 75% of the winning purse bid amount as the champion, with the remaining 25% to go to the challenger.

There's a chance such a session won't be necessary. Earlier on Tuesday, McDonnell's promoter Eddie Hearn announced plans for a return to Monte Carlo, Monaco on November 4. Details of the show have yet to be revealed, but it is believed that the rematch will be returning to the high-end gambling city which hosted their first meet.

McDonnell managed a 12-round decision win in their first title clash last November, although most viewers believed that Venezuela's Solis was the victim of arguably boxing's worst robbery of 2016. Neither boxer has since fought, waiting out terms for their pending sequel.

The closest to any ring action for England's McDonnell was watching his twin brother Gavin come up well short in a bid to capture a super bantamweight title, as he was outclassed over 12 rounds by Mexico's Rey Vargas this past February.

Once finalized, the bout will mark McDonnell's sixth defense of the bantamweight title he won in May '14.

Solis enters his third attempt at becoming a bantamweight titlist after briefly reigning as a full super flyweight beltholder in 2013.