Parker vs. Fury Rescheduled For September 23 in Manchester 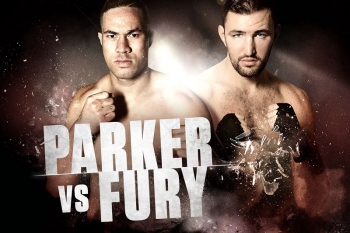 The mandatory title fight between Joseph Parker and Hughie Fury is finally back on the books—and complete with a new date, location and nation.

Duco Events, whom promotes Parker announced Monday morning (Australian EST) of the oft-rescheduled heavyweight title fight that is now secured for September 23 at the Manchester Arena in Manchester, England. The new plans gives Fury home field advantage, as opposed to the previous attempts in getting the two unbeaten boxers in the ring which were slated to take place in Australia.

Parker (23-0, 18KOs) will attempt the second defense of the title he claimed in a decision win over Andy Ruiz last December. He was due for a May 6 meet with Fury, who suffered an untimely injury during training camp and was replaced by Razvan Cojanu, whom Parker outpointed in a pedestrian affair.

Now he gets to travel abroad in making his UK debut for his next outing.

"I’m very much looking forward to this fight," Parker said in a statement through Duco Events press office. "It’s been a long time coming but the contract is signed thanks to my promoter David Higgins and I am ready to get going.

"In the contract is what we want and David (Higgins) has worked very hard to get the contract sorted and now that it’s ready and the date is confirmed., we’re looking forward to going over to the UK and making a statement and putting on a great show."

Fury (20-0, 10KOs) will fight for a title for the first time in his career. The younger cousin of former World heavyweight champion Tyson Fury has been out of the ring since a technical decision win over Fred Kassi last April, having spent the past 14 months nursing injuries and watching several fight dates fall through.

To make up for lost time, he will take on a rust-shaking affair July 1 in London, for which Parker and head trainer Kevin Barry will be ringside as interested observers. Perhaps it's tempting fate, but as long as he escapes unscathed, there awaits the biggest opportunity of his young career.

Not that it fazes him in the least bit.

"I’ve never had a close fight," points out Fury. "I’ve won every round of every single fight. I’m going to let my fists do the talking and I’m going to take his belt home with me."

Naturally, the defending heavyweight titlist has other ideas—even in the presence of a potentially hostile crowd.

"The idea of going to the UK is something I am looking forward to, and no I don’t hold any grudges (about Fury not coming to NZ on May 6)," states Parker. "I just go in there respect my opponent and do what I have to do. That’s go in there and win the fight and defend my title and keep it here.

"The crowd against me? I will use it as energy and motivation to put on a great show and fight hard. I know there will be a lot of supporters for him (Fury) but I know I back myself and put on a great show, and hopefully get him out of there."