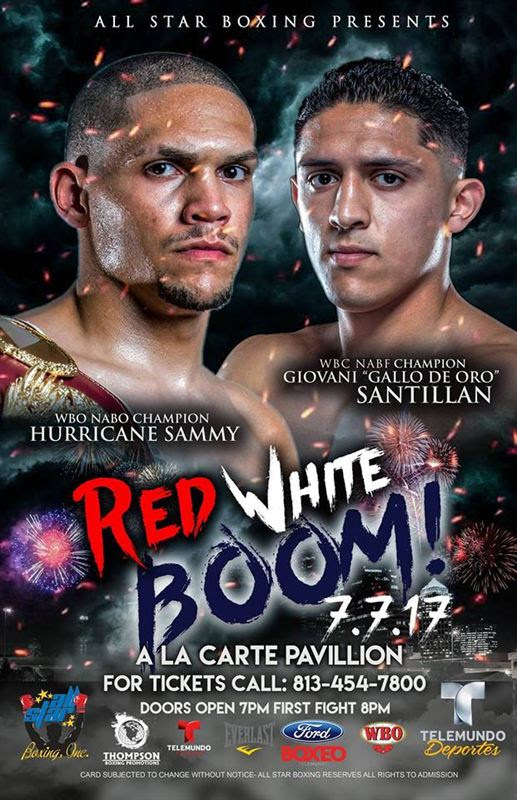 The highest-rated and longest-running Spanish-language boxing program is locked in for a red-hot summer—in and out of the ring.

Boxeo Telemundo will return to network airwaves on July 7, running every Friday throughout the month for its anticipated summer series following an entertaining spring season that featured a slew of knockouts, a couple of notable upsets and the showcasing of Olympic talent in the early stages of their pro careers.

Flying right out the gate is perhaps the most competitive series matchup of the year, as rising prospect Sammy Valentin (12-0, 9KOs) steps up in class to face Giovani Santillan (21-0, 11KOs) in a battle of unbeaten welterweights. The scheduled 10-round regional title fight airs July 7 on Telemundo live from A La Carte Pavilion in Tampa, Florida.

Valentin—whom signed with the series' primary promotional content producer All-Star Boxing in 2015, shortly after his pro debut—has considerable hometown advantage, with all of his pro fights to date taking place in Florida. This bout will mark his ninth at this very venue, where he has proven to be a massive hometown hit with the crowd.

Of course, fights are won and lost in the ring, regardless of how many people are on hand to support your cause.

"We think the world of Sammy and have believed in his championship ability since we first saw him in the amateur ranks," All-Star Boxing's Felix 'Tutico' Zabala Jr. told FightNights.com. "We truly see greatness in his career, and he needs a test like this—even at this point in his career—to prove he belongs on that level.

"Giovani Santillan doesn't know how to lose—just like Sammy—and knows he has to fight that much harder to impress in Sammy's backyard. Of all the years I've been involved in this terrific series, this is a matchup I rank up there with the best of them."

Santillan not only travels into hostile territory, but fights outside of the West Coast for the first time in his five year career. The 25-year old unbeaten southpaw has fought all but one bout in his native California, the latest coming in an eight-round win over Omar Tienda this past February.

The show will also include the latest ring appearances for a pair of 2016 Rio Olympians.

Teofimo Lopez (5-0, 5KOs), based out of Davie, Florida but whom represented Honduras in the 2016 Olympics, where he suffered a highly controversial loss in the opening round of competition. He's yet to leave matters in the hands of the judges since turning pro last November, and puts his knockout streak to the test as he faces San Antonio's Christian Santibanez, whom has only been stopped once in his career.

Antonio Vargas (2-0, 2KOs), from Kissimmee, Florida (while also splitting time in Houston) who served on Team USA in the 2016 Olympics, fights for the third time as a pro and with all three coming in his home state. The charismatic bantamweight—whom turns 21 in August—has amassed less than four minutes of ring time through two 1st round knockouts in the pro ranks as he prepares for Mexican veteran Leonardo Reyes in a scheduled six-round affair.

The summer series will return to Central Florida on July 28, when Telemundo favorite David Carmona travels from Mexico to the Osceola Heritage Park in Kissimmee, Florida , where he will headline in a 10-round super flyweight clash versus José Martínez.

Wedged in between are a pair of shows at series venue favorite Auditorio Blackberry in Mexico City. Familiar Telemundo face Romulo Koasicha of Mexico headlines the July 14 edition as he faces countryman Josue Veraza in a 10-round regional featherweight title clash. One week later, Antonio “Toño” Morán will face Wilberth López in a 10-round regional lightweight title fight.

"Fans will definitely be in for a treat every Friday night this July," promises Zabala Jr. "Our series boasts the largest crowd among any Spanish-speaking boxing program—often beating out competing English-speaking broadcasts as well—so we know we have to deliver compelling, competitive fights.

"Looking at the schedule, we are confident that our fans will get their full money's worth—as will once again be the case when we head into the fall season."