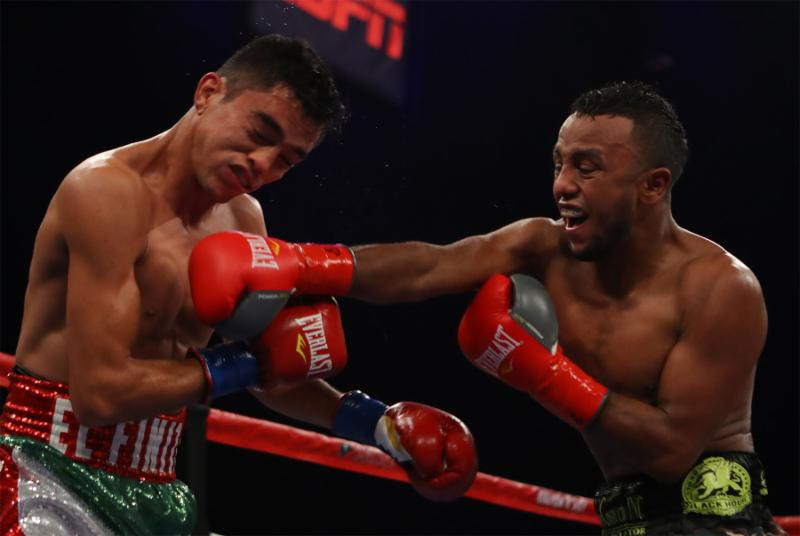 A perfect storm of events allowed Oscar Negrete to shine in his debut as an ESPN2 headliner.

Now he's ready to take on the boxer indirectly responsible for making that happen.

Stepping up in class, the unbeaten Negrete raised his game considerably in stopping the normally durable Sergio Frias after four rounds of action Friday evening at Fantasy Springs Resort Casino in Indio, California.

The bout aired live on ESPN2 as part of the "Golden Boy Boxing on ESPN" series, also marking the 50th show that Golden Boy Promotions has staged at the intimate California desert locale. Original plans called for the main event to feature former bantamweight titlist and local favorite Randy Caballero, whom was forced to withdraw due to injury.

Negrete willingly stepped in and took full advantage of the upgrade in exposure and competition level. Frias (19-7-2, 10KOs) was last seen punching former two-division champ Vic Darchinyan out cold last July, but was no match for the unbeaten bantamweight prospect in front of him on this night. Negrete dominated from the opening bell, fighting with an exceeded level of purpose and scoring the bout's lone knockdown in forcing Frias to a knee in round three.

The aforementioned sequence prompted Frias' corner to light a fire under their charge, insisting the 26-year old boxer from Mexico had just one more round to turn things around or else they were pulling the plug. Three more minutes of dominance by Negrete led to that very scenario, as Frias' corner disallowed the battered boxer to come out for round five.

The official time was 3:00 of round four.

Negrete improves—in every sense of the word—to 17-0 (7KOs) and is eager to continue to raise his level of competition. He was so grateful of the circumstances that led to his serving in the main event that he wants to personally thank the boxer for making it happen, in his next ring adventure.

"I want Caballero next," Negrete bluntly stated afterward. "(Friday night) with Sergio Frias, I knew I was winning the fight; it was more of waiting for either the knock out to come about or get the unanimous decision. I felt like my jabs were the most effective, because after watching his fight against Darchinyan, our team noticed that he didn't move his head a lot.

"There's a couple more of these belts that I need to add to my career."

Facing and beating someone on the level of Caballero would be a huge leap in the right direction.

Technical difficulties on the part of ESPN and its affiliates limited Friday's telecast to a one-fight affair. As a result, viewers missed out on the next step in the career of rising lightweight Ryan "Blue Chip" Martin. The unbeaten 24-year old from Cleveland, Ohio by way of Chattanooga, Tenn. ran his record to 19-0 (11KOs) following a 10-round whitewash of Marcos Jimenez.

If there was any disappointment to come of the clean win for the aspiring lightweight contender, it was that it didn't end inside the distance.

"He was a tough, very defensive fighter," noted Martin. "It was hard for me to get him to open up because he would only throw a shot once he knew he could land it clean. This was my first time going the full 10 rounds, and by the eight, I was like 'darn, he's still standing?!'

"Overall, I felt that I could be more consistent with my style, and I wish I would have listened to my coaches more while I was in the ring, but I am satisfied with my performance and despite not getting the knock out, I'm glad that I got the win."