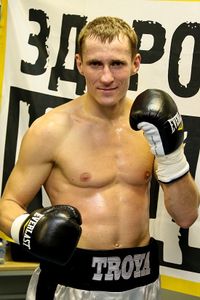 If nothing else, Eduard Troyanovsky is a brutal puncher.

The former super lightweight titlist returned to form—and the win column—with a one-sided knockout of Michele DiRocco in his ring return Saturday evening in Moscow, Russia.

Three knockdowns spread out over the course of the bout paved the way for a savage finish, with Troyanovsky finishing off his disinterested foe at 2:18 of round four. The knockout came in chief support to the ring return of former secondary heavyweight titlist Alexander Povetkin in his 12-round battle with Andriy Rudenko.

Interestingly, it was the Russian slugger who was initially in trouble as he was momentarily stunned in the opening round. It was hardly shades of his last encounter, when unbeaten Julius Indongo stormed into Moscow to end his title reign with a single punch just 40 seconds into the December night. Rather, the 37-year old quickly recovered and reminded Di Rocco who's is bigger, landing a right hand shot that dropped the visiting Italian boxer to the point where a 1st round knockout seemed imminent.

Di Rocco showed heart in rising to his feet, but was better off staying on the deck as he showed little interest in fighting back for the duration of their condensed affair. Troyanovsky had him on the deck again in round three before closing the show in round four—dropping him midway through the frame before battering him along the ropes in forcing the stoppage.

Troyanovsky improves 26-1 (23KOs) and it's not unfathomable that he makes another run in the super lightweight division, even if time isn't necessarily on his mind. His title days came courtesy of a pair of knockout wins over feather-fisted Argentine stinker Cesar Cuenca, further proving his worth with a sensational two-round annihilation of the credible Keita Obara in Sept. '16. Disaster struck three months later when indongo ended his reign with a highlight-reel one-punch 1st round knockout.

Still, the 140-pound division doesn't run deep beyond the very top level. Terence Crawford is undoubtedly the class of the division, racking up one-sided wins against all comers and is now set to defend his World (lineal) 140-pound championship versus Indongo in August.

Beyond that, Troyanovsky boasts no worse than a puncher's chance against anyone among the rest of the field.

The same cannot be said for Di Rocco, who for the second time in just over a year looked overwhelmed and flat out awful as the stakes were raised. His meager skill set contributed to Ricky Burns picking up an alphabet title in a third weight class in stopping the Italian in eight rounds last May. Just 13 months later, he suffers his second loss in three fights in falling to 41-3-1 (18KOs).