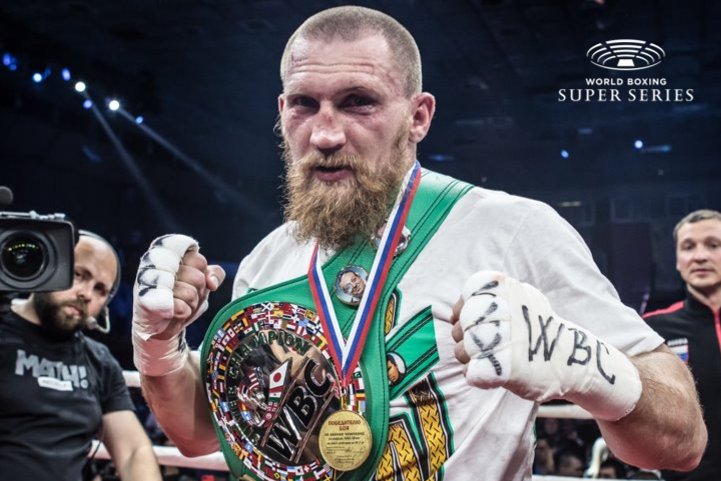 Depending on the level of confidence among the rest of the field, the World Boxing Super Series cruiserweight entries are either rejoicing or absolutely dreading the arrival of Dmitry Kudryashov.

The all-action knockout artist from Russia has long been rumored to land a spot in the highly anticipated tournament, with such speculation becoming a reality on Wednesday morning. Kudrayshov—literally a knockout every time out at 21-1 (21KOS), with his lone loss also coming via stoppage—joins a jam-packed field that already includes four reigning titlists and two ex-champs, with one spot still open ahead of Sunday's live draft in Monaco.

“I am the Russian Hammer and I will hammer my way to four titles and the Muhammad Ali Trophy,” said Kudryashov, whose last ring appearance was a savage 5th round stoppage of Olanrewaju Durodola in June, avenging his lone career loss. “The tournament is loaded with champions and former champions but nobody has a better KO ratio than me. I have a lot of respect for my fellow participants but whoever gets in my way will be knocked out.”

Kudryashov's lone loss came due to getting clipped after going all in during a free-swinging first round of his first fight with Durodola in Nov. '15. He corrected that flaw in a big way, dominating Durodola from the opening bell in their rematch this past June in reasserting himself as a dangerous threat in a criminally underappreciated cruiserweight division.

The formation of the WBSS came with the intention of shining a spotlight on weight classes that don't get their proper recognition. With the current stacked field at cruiserweight—and still with one more spot to fill—that problem should go away the moment the first wave of bouts are rolled out, with the tournament due to begin in September.

“Four undefeated world champions, two former champions and a KO king battling it out in a bracket-style elimination tournament – it hardly gets any better than this,” said Roberto Dalmiglio, head of management board for Comosa, the company responsible for putting together the 16-man tournament spanning two weight divisions. “The World Boxing Super Series will set new standards in terms of quality and entertainment.”

Such attributes are all that any promoter seeks in any given fight, never mind a series of them.

“A KO tournament for the KO machines – this is what fans have been dreaming of for a long time,” said Richard Schaefer, Comosa`s Chairman of the Americas. “You wouldn't want to miss a single second of the tournament, not just because of the fighters' overall quality but especially because of their punching power. With a line-up like this, any fight can be over at any second. The fans will love the Muhammad Ali Trophy.”

As one seed remains vacant in the cruiserweight bracket, the super middleweight portion remains halfway confirmed. Between the two weight divisions, there remains five more entries to be confirmed ahead of Saturday's draft gala.

While the in-ring fun is due to begin in September, there exists potential for plenty of drama to come with all 16 participants in attendance for Saturday's live draft. The top four seeds of each bracket will be declared, at which point they will have the luxury of picking their first round opponent. Photo opportunities will follow, in addition to all of the participants getting an up-close and personal look at their first opponent standing in their way of a lucrative prize that awaits the winner of each bracket.

"The drama begins live on stage at the famed Grimaldi Forum when these warriors will see eye-to-eye with their biggest rivals and try to select the easiest opponent,” said Kalle Sauerland, Comosa's Chief Boxing Officer. “However, between four world champs, two former champs, a KO king and another high-profile challenger to be announced shortly (for the cruiserweight bracket), there will be no easy opponents. It´s intriguing to debate about who will pick whom. We can't wait for Saturday.”