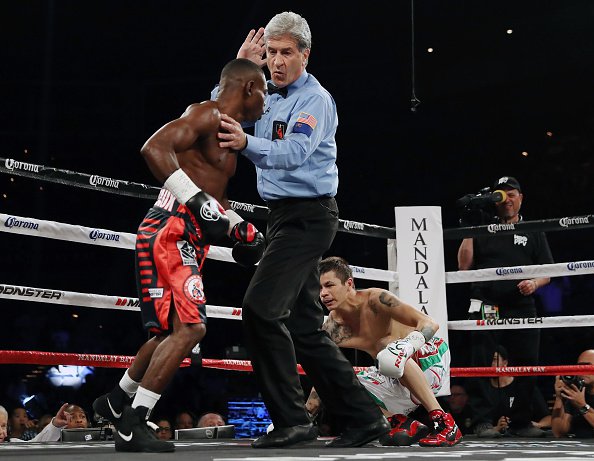 Yet another rematch has been ordered by the World Boxing Association (WBA), which spent much of the Wednesday workday in the sequel business.

Hours after issuing a hard deadline for featherweights Leo Santa Cruz and Abner Mares to wrap up terms for their planned return go, the Panama City-based sanctioning body informed the camps of Guillermo Rigondeaux and Moises "Chucky" Flores that their next respective fights will come against each other.

There is a catch to their negotiations, however. While the two unbeaten super bantamweight titlists are granted a 30-day negotiation period, such talks cannot formally begin until Flores completes a 60-day medical suspension as handed down by the Nevada State Athletic Commission.

Providing he passes a subsequent medical examination, Flores' suspension will end on August 16, at which point he will be permitted to resume daily training and begin negotiations for a rematch. The two camps will functionally have until September 15 to reach a deal or else will be subject to a purse bid hearing. All told, the rematch must take place no later than 150 days out from their June 17 encounter, which would place such a contest in roughly mid-November.

The suspension came as a standard safety precaution following a 1st round knockout loss to Rigondeaux that has since been changed to a No-Contest due to the knockout blow coming well after the bell sounded to end the opening round. Flores' team successfully protested the outcome of the result, as the NSAC declared the fight-ending blow to come from an accidental foul—"accidental" providing the difference between a No-Contest and what could've resulted in a disqualification loss.

Despite the official verdict being overturned, the suspension stems from the severity of the landed punch—illegal or otherwise—as Flores was rendered unconscious by the ringside physician at the conclusion of their title consolidation bout. Their clash came in supporting capacity to Andre Ward's 8th round knockout of Sergey Kovalev in their own rematch, which topped an HBO Pay-Per-View telecast live from Mandalay Bay Events Center in Las Vegas, Nevada.

The anti-climactic ending to the title consolidation clash only further adds to the drawn out process of what it took to get the two in the ring. Rigondeaux has held some form of the WBA super bantamweight strap for nearly seven years dating back to his Nov. '10 interim title win over Ricardo Cordoba. He gained "regular" title status following a one-sided 6th round knockout of Rico Ramos in Jan. '12 and then elevated to "Super" champion after serving up a boxing lesson to 2012 Fighter of the Year Nonito Donaire in their April '13 clash.

The ugly side of politics led to Rigondeaux being blatantly ducked and avoided by other titlists and challengers in his division, to the point where he was left without a fight for nearly all of 2015—long enough for the World Boxing Organization (WBO) to strip him of the title he'd claimed in his aforementioned unification clash with Donaire. The WBA attempted to follow suit, but backed off and nearly named him "Champion in Recess." He was reinstated as champion following Carl Frampton's points win over Scott Quigg in their Feb. '16 title unfication clash, after which point Frampton abandoned the division in favor of a featherweight run.

Rigondeaux has since registered two title defenses—a 2nd round knockout of James "Jazza" Dickens last July in England, and his knockout-turned-No-Contest versus Flores, who made two defenses of the interim title he claimed in a 12-round win over Oscar Escandon in April '15.

Their first fight was on the books for all of 2017, as the two were ordered to fight in late 2016 and due to collide this past February. Those plans fell through with the cancellation of that show's main event, as James Kirkland suffered an injury that forced him to withdraw from a showdown with former four-division champion Miguel Cotto.

Rigondeaux is promoted by Roc Nation Sports—at least for as long as the Jay-Z created enterprise chooses to remain in boxing. Flores is represented by TGB Promotions and adviser Al Haymon.