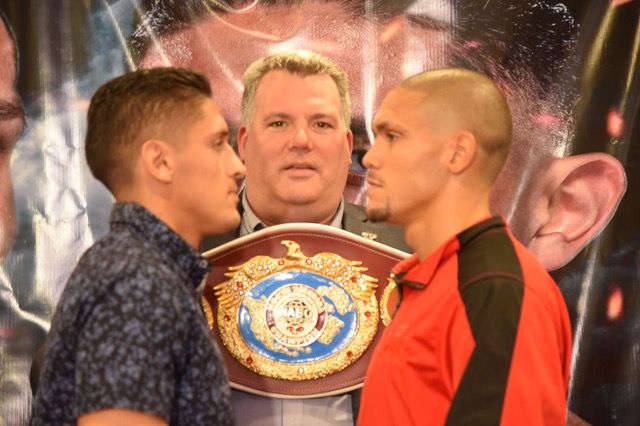 From the moment they saw him ply his trade in the ring, the staff at All-Star Boxing saw a future world champion in Sammy Valentin.

That theory will be put to the test as the young boxer embraces his toughest career challenge to date.

In one of the more competitive and attractive matchups to grace the Boxeo Telemundo circuit in recent memory, Valentin puts his perfect record and blue-chip prospect status at risk as he faces fellow unbeaten welterweight Giovanni Santillan in their scheduled 10-round regional title fight. The bout will air live on Telemundo this Friday (11:345pm ET) from A La Carte Pavilion in Valentin's hometown of Tampa, Florida.

Home field advantage in a matchup like this, however, merely means coming in as the crowd favorite.

"It's a blessing to continue to develop my hometown fan base, but this matchup right here—we wanted this fight because we're ready for bigger and better things," Valentin (12-0, 9KOs) told FightNights.com. "An old boxing cliché is that in order to be the best you have to beat the best. Well, this fight is a chance for me to prove that, not just to say it. I told my promoter and my corner that I want to keep moving in the direction of a title fight. They came back and told me I'm fighting Giovanni Santillan; that's exactly the challenge I need right now."

It's a step up in class for the 23-year old Tampa-born and bred prospect, who has spent the entirety of his young career fighting in Central Florida. Friday's headliner will mark his eighth career appearance at A La Carte Pavilion in just 13 pro fights.

"We've always drawn well at this location, but the demand for tickets has just gone through the roof ever since Sammy began fighting here regularly," notes Felix 'Tutico' Zabala, Jr., whose All-Star Boxing has been involved in Valentin's entire pro career since his Oct. '14 debut.

The Miami-based outfit formally signed him to a contract in Oct. '15, prior to his 5th pro fight. They liked what they saw long before ever putting ink-to-paper, and remain thrilled with the development.

How everyone feels about the arrangement after Friday, only time will tell.

Santillan (21-0, 11KOs) goes far against the grain of the type of opponent you want your prospect to face while still on the rise. The 25-year old from San Diego fights away from the West Coast for the first time in his young career, but brings with him a lot of grit and a tough-to-solve style out of the southpaw stance that has made it difficult for the unbeaten welterweight to secure meaningful fights.

Then along came this opportunity.

"We took this fight because it's necessary to prove whether or not I'm destined to become a champion," believes Valentin, who is coming off of a 1st round knockout over Luis Florez this past April, which marked his debut as a Telemundo headliner. "Each fight is meant to be for bigger and better things. Giovanni Santillan is that obstacle in my way right now.

"There is always something in your way. It’s something we plan to prepare for, and we are prepared for anything (Santillan) brings to the ring on Friday night. I'm never the type to brag on myself. My faith keeps me humble, and my actions will speak for me. This is a challenge that I wanted and now I have it."