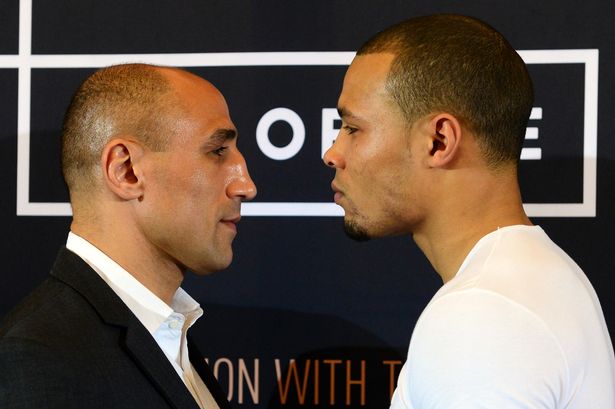 With a spot in the highly anticipated World Boxing Super Series at stake, the headlining combatants for this weekend's show in London already have far more on which to concentrate than just the opponent in front of them.

Arthur Abraham now has one more problem to add to that pile.

The former two-division titlist was nearly two full pounds over the super middleweight limit ahead of his 12-round battle with Chris Eubank Jr. this Saturday at Wembley Arena in London. Abraham initially came in at 169.9 lbs., but even an effort to have the scale moved to a more stable part of the stage during Friday's weigh-in only saw a slight reduction as he still clocked in at 169.75 lbs.

A two-hour period has been allotted for the visiting boxer from Germany to make 168 lbs., or else be subject to a fine and the risk of the bout being canceled. The latter would be at the discretion of Eubank Jr.(24-1, 19KOs), whom easily made weight in coming in at 167.2 lbs.

Eubank Jr. has won five straight starts since suffering the lone defeat of his career, a 12-points loss to Billy Joe Saunders in Nov. '14. Most recently, the second-generation boxer scored a 10th round knockout of Renold Quinlan this past February in London.

Abraham (46-5, 30KOs) is hoping to extend a 14-year career seemingly on its ninth live. The 37-year old hit a career funk in suffering three losses within a four-fight span in struggling through another tournament—the Showtime Super Six World Boxing Classic, for which he moved up from middleweight after having made 10 successful title defenses. He's since won 14 of his last 16 starts, including two tours as a super middleweight titlist before watching his second reign end in disappointing fashion as he dropped a wide 12-round decision to Gilberto Ramirez last April.

Two wins have followed, including a points victory over Robin Krasniqi this past April. Saturday's contest—assuming it will still go on as planned—marks the first in London for Abraham, with the overwhelming majority of his career being staged in Germany.