Artur Szpilka: This Fight Is Not The Finish Line For Me 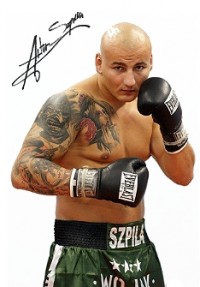 Artur Szpilka wants to make it perfectly clear—it was never his idea to face a fellow Polish heavyweight for his first fight in more than a year.

Nor is merely winning his end game.

"This fight versus Adam Kownacki—it's not the finish line for me," Szpilka told FightNights.com—through the assistance of translated and renowned scribe Przemek Garczarczyk—ahead of his ring return. "I'm not just looking for a win; this fight is going to lead to even bigger opportunities for my career."

The battle with countryman Kownacki will take place Saturday evening live in primetime on free-to-air Fox TV from the newly renovated Nassau Coliseum in the Uniondale section of Long Island, New York.

The 28-year old southpaw from Poland has been out of the ring since suffering a one-punch 9th round knockout loss to Deontay Wilder last January in front of a capacity crowd at Barclays Center in Brooklyn, New York. He was more than holding his own for eight rounds in a bid to become the first-ever Polish boxer to win a heavyweight title, until a scintillating right hand put Szpilka (20-2, 15KOs) down and out in a horrifying scene as he was rendered unconscious for several minutes before thankfully coming back around.

Now he simply wants to come back.

"I promise—and I know athletes say this all the time after losing, but I do mean it—I am better than I was before," claims Szpilka. "The fight with Wilder was a true learning lesson for me. I will be a lot lighter for this fight (Szpilka was 233.25 lbs. for the Wilder fight), his heaviest weight since 2013), and we also made technical adjustments.

"No doubt, everyone will see a full development of my skills and improvement."

Szpilka was actually praised for the skill level exuded in his title fight with Wilder, often making the unbeaten titlist miss through eight rounds before getting caught with the highlight reel punch. What's since been missing is the opportunity to show he's been able to move past the loss, watching two fights fall through the cracks.

One such chance to get back in the mix was to come this past February, where he was slated to face Dominic Breazeale on the undercard of Wilder's most recent title defense in Birmingham, Alabama. Wilder was due to square off versus Andrzej Wawrzyk in the Fox-televised main event, with Szpilka and Breazeale to collide in a televised prelim. The show took on many changes, with Wawrzyk—who was popped for PEDs during random pre-fight drug testing—replaced by Gerald Washington, whom Wilder defeated by TKO to retain his title.

Szpilka was removed from the mix altogether, without the assurance of another fight immediately on the horizon. Network concern of pairing two heavyweights coming off of knockout losses (Szpilka to Wilder, Breazeale to Anthony Joshua last June) led to event handlers replacing Szpilka with Izuagbe Ugonoh, a Poland-born slugger of Ugandan descent against whom Breazeale rallied to stop in five rounds.

From announcement to fight night, it was a series of Pole repositions—but with Szpilka left on the outside looking in when all was said and done. Now his chance to get back in the ring comes at the expense of facing a countryman.

"Let’s be honest, it was a big disappointment to not be able to fight for the past 18 months," laments Szpilka. "I was supposed to fight Breazeale - we had it scheduled twice and it never happened. The fight was announced by Breazeale himself. I sign a contract and the fight never happened.

"So when I asked about another fight, they told me about fighting this guy (Kownacki). It's not an ideal situation, facing another Polish heavyweight. I'm not against the idea, but there are plenty of other Polish boxers I despise. I have nothing against Kownacki—it's not personal, it's just a fight. But it's a fight that his team wanted, so we agreed to it. They wanted it, they got it."

Now that it's here, the charismatic heavyweight contender is hoping for everything to come full circle assuming he wins on Saturday.

"A win here is going to lead to big things," Szpilka believes. "Breazeale is talking a lot. So you know what? I'm going to knockout Kownacki on Saturday and then Breazeale can come fight me. I'll knock him out, too, and will be right back in position for my first world title."