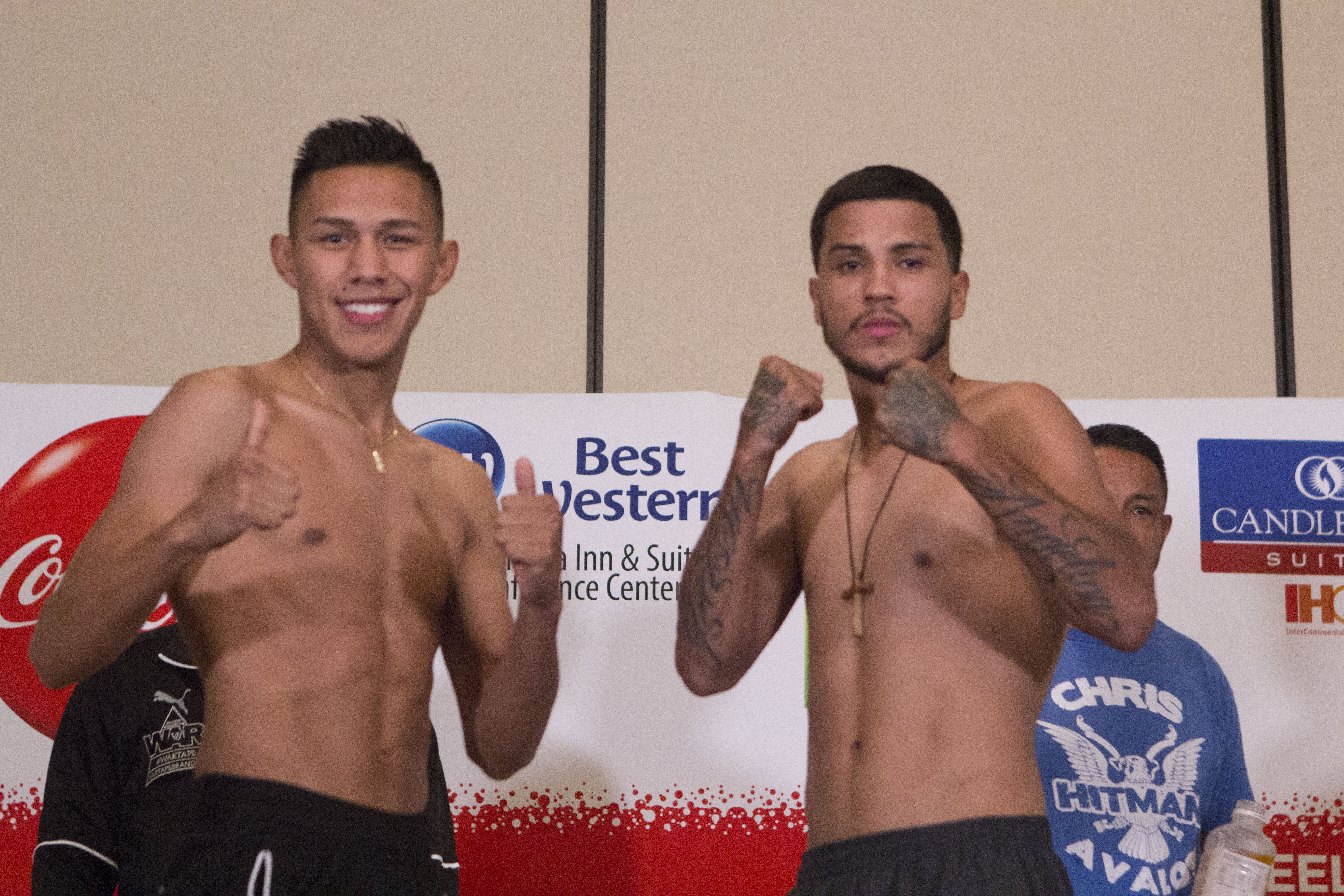 All participants made weight for the nine-fight card, which airs live on FS1 from Rapides Coliseum in Alexandria, Louisiana. Headlining the show are a pair of featherweights in need of a win, as Miguel Flores and Chris Avalos collide in a scheduled 10-round contest. Flores—who celebrated his 25th birthday having to make weight—tipped the scales at 125.3 pounds, while Avalos—a two-time title challenger—checked in at 125.8 pounds.

The bout is the first for Flores (21-1, 9KOs) since suffering his lone career setback to date. The featherweight hopeful was stopped in six rounds on this very circuit this past February in his hometown of Houston, Texas. He now returns one day after his birthday, hoping to forever blow out the candles on the career of yet another comebacking opponent.

Once upon a time, Avalos (26-5, 19KOs) was a promising 118- and 122-pound prospect on the rise. While the California native suffered some bumps on the way up, his two-fisted power was always on display. However, the ring wars have already begun to take its toll, as the 27-year old has suffered three losses—all by stoppage—in his last four starts. A brave showing came in his 6th round defeat at the hands of Mark Magsayo, whom he dropped early in their April '16 clash before falling behind and suffering considerable damage before the fight was mercifully halted.

The 15-month break that followed could very well be the remedy to his career—or it could simply prolong the inevitable. Tuesday's main event will reveal the truth, one way or the other.

In the co-feature, Ahmed Elbiale (15-0, 12KOs) looks to extend his unbeaten pro run as he faces late replacement Christopher Brooker. The Miami-based Egyptian light heavyweight weighed 176.7 pounds for his clash with Philadelphia's Brooker (12-3, 5KOs), who weighed 174.9 pounds for an assignment he accepted on less than a week's notice after originally scheduled opponent Leo Hall was scratched for undisclosed reasons.

Also on the card are a pair of previous major players in their respective weight classes, although whether or not they make airtime remains to be seen.

Charles Martin (24-1-1, 22KOs) looks to pick up his second straight win as he takes on Michael Marrone in a scheduled 10-round heavyweight attraction. The 31-year old southpaw checked in at a career heaviest 255 pounds for his second fight since conceding his heavyweight title to Anthony Joshua in a two-round blowout last April for his lone career defeat. Marrone (21-7, 15KOs) weighed in at 243 pounds, as he hopes to snap a three-fight losing streak, which has lasted a total of less than five full rounds.

Deep in undercard action, all-action Edwin Rodriguez (28-2, 19KOs) ends a 15-month ring hiatus as he faces Melvin Russell in a special eight-round attraction at a 187-pound maximum weight limit. Both boxers came inside the mark, although the 185.8 pound mark is a career-fleshiest for Rodriguez, who has provided plenty of thrills over the years but whom hasn't fought since a 2nd round knockout to Thomas Williams in their Fox-televised slugfest last April. Russell (10-1-2, 6KOs)—one of several last-minute opponent changes on the show—weighed 184.4 pounds, as the Kentucky-bred 38-year old "Romantic Redneck" looks to score the biggest win of his two-plus year career.

Originally slated for the telecast but now assigned to live TV swing bout status is wildly entertaining super lightweight Ryan "Cowboy" Karl. Never in a dull fight, the free-punching Texan looks to overcome his first career loss from February as he faces Carlos Velasquez, a replacement for the previously scheduled Ryan Pino whom—like Leo Hall—was pulled from the lineup for undisclosed reasons.

Karl (13-1,9KOs) weighed 144.8 pounds for his first fight since a 9th round stoppage loss to highly-regarded Eddie Ramirez in a battle of unbeaten prospects this past February. Velasquez—who took the fight on less than one week's notice—weighed 144.6 pounds for what will be his second fight in just over five weeks, having suffered a 10-round defeat to another boxing cult favorite in Thomas "Cornflake" LaManna in June.