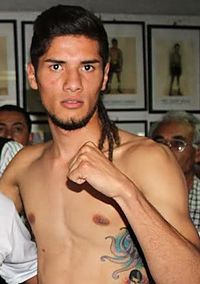 Somewhere along the way, Wilberth Lopez decided that facing Antonio Moran on national television was no longer worth his time.

Life goes on, and so will this weekend's telecast of Boxeo Telemundo.

While the Tuscon-based lightweight has up-and-vanished and will now become the subject of a commission investigation, Friday's headliner will still showcase Moran whom now faces late replacement Guadalupe 'Lupe' Rosales. Their scheduled 10-round battle will air live from Auditorio Blackberry in Moran's hometown of Mexico City, Mexico.

"We're not exactly sure what happened, other than to say we have video proof of Mr. Lopez signing a contract to agree to this fight and is suddenly nowhere to be found," promoter Felix 'Tutico' Zabala Jr. of All-Star Boxing told FightNights.com of the incident before declining further comment in light of the planned investigation.

Moran (21-2, 14KOs) has quickly emerged as a series favorite, throwing hands with Juan Pablo Sanchez in a points win last summer and an explosive 1st round knockout of Richard Zamora this past March. The rangy lightweight was looking forward to a matchup with another tall and lean divisional rival, but the 5'10" Lopez—coming off of a hard-fought eight-round decision defeat to Alex Saucedo this past May in Chicago—denied him that opportunity with his departure from the show.

In his place comes Rosales (34-12, 18KOs), a durable journeyman from San Luis Potosi who is coming off of an upset win over previously unbeaten Ernesto Colon this past June in Durango, Mexico. The veteran boxer—who turns 36 this upcoming Sunday—was in training with Romulo Koasicha (whom suffered a stunning upset loss in last Friday's Boxeo Telemundo headliner) and was more than willing to jump in to fill the void.

"We got lucky in securing Rosales as a formidable replacement," notes Zabala Jr. "He's in shape, coming off of a big win and is always ready to push a younger boxer to the limit."

"It's not the fight we originally scheduled, but it's very possible that we get an even better matchup with this change given "Bronco's" experience level." surmises Zabala Jr. "Everything thought they had the outcomes figured out the past two weeks and we saw what happened."