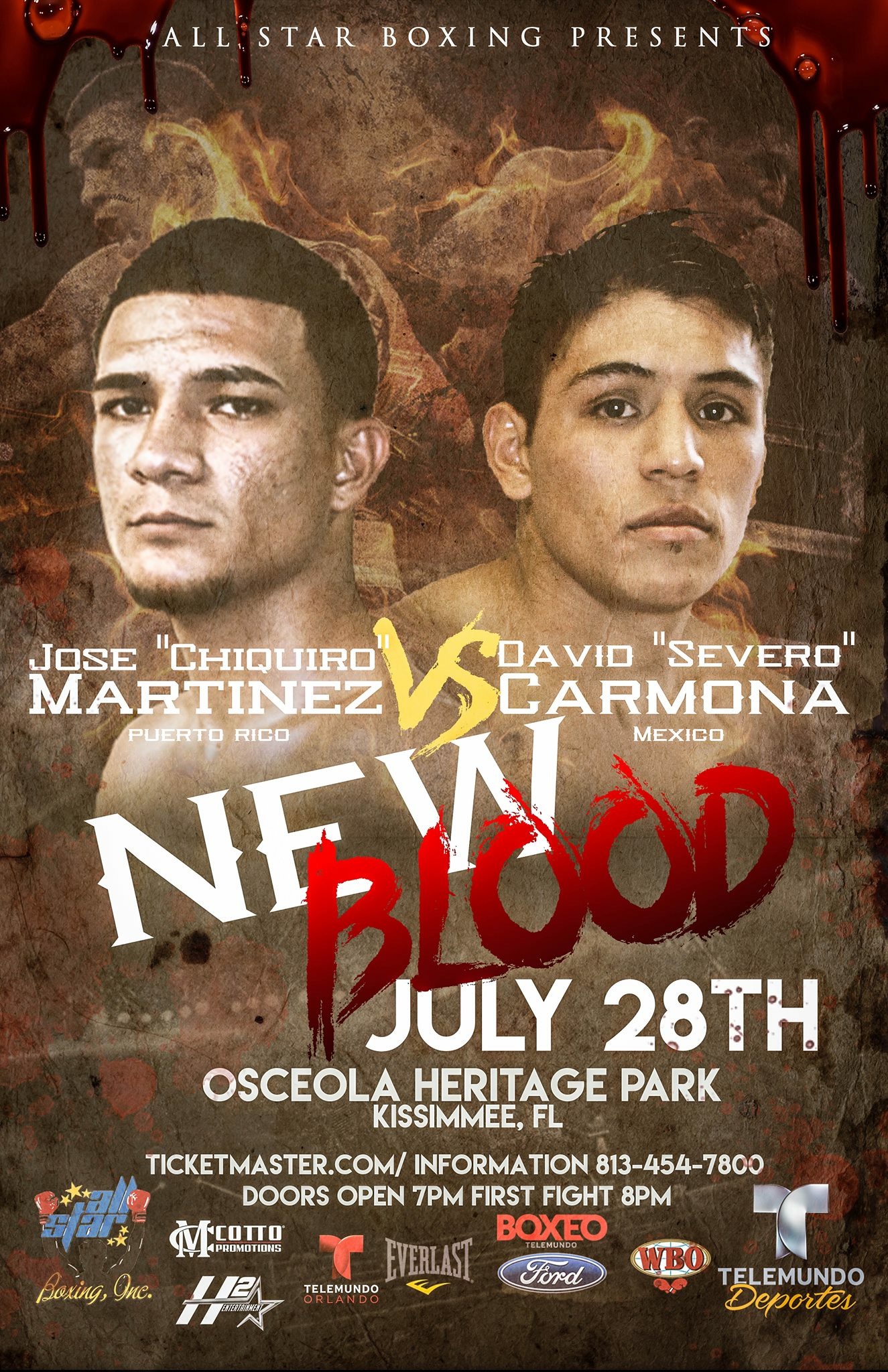 With back-to-back upsets and a grueling slugfest comprising of the three summer season main events, you'd figure the brass at All-Star Boxing would proceed with caution in sending out its next client on the Telemundo circuit.

To assume that would be severely misjudging the passion for action fights carried by the series' primary content provider.

"Every weekend has provided something spectacular, and our summer season finale will surely be a headline grabber as well," All-Star Boxing President Felix 'Tutico' Zabala Jr. insisted to FightNight.com of this weekend's main event.

A quick glance at the résumé of Carmona (20-4-5, 8KOs) suggests that the 26-year old from Mexico City is in dire need of a win. Those who find value in boxers challenging themselves will argue that his stock has possibly risen in recent years, even with just one win in his last four starts.

The longtime Telemundo favorite—who returns to the series for the first time since a 10-round win over Ricardo Rodriguez in their Oct. '15 rematch—has suffered two straight losses. Last May, he dropped a 12-round decision to unbeaten 115-pound titlist and prodigious talent Naoya Inoue in Japan, although offering a far stiffer challenge than indicated on the final scorecards. The bout was his lone appearance of 2016, returning this past March to give former champ Carlos Caudras all that he can handle in coming up short in their 10-round battle at Madison Square Garden in New York City.

Still, the two bouts probably provided far greater experience for the longtime contender than has any victory.

"David has a taste for the championship level in this stacked division, and doesn't want to go backwards," explains Zabala Jr. "Many writers and fans had his fight with Carlos Cuadras very close, most saying it should've been a draw and even some saying (Carmona) deserved the nod. Nevertheless, he proved that he belongs on the big stage and wanted the type of opponent where a win would really mean something."

His most recent ring appearance resulted in a 1st round knockout of Miguel Robles this past April in Ponce, roughly 90 minutes southeast from his hometown.

"David wanted a real fight, and he's in for one," Zabala Jr. believes. "The Mexico versus Puerto Rico storyline alone instills that extra bit of pride for both boxers. But now you have a young kid who doesn't know how to lose (in the pros) and a win over a veteran title challenger will put him in line for a title shot of his own.

"Our series has consistently produced title challengers following big wins (on the Boxeo Telemundo circuit). David knows that better than anyone else, having fought Inoue and Omar Narvaez following big televised wins."

As a fan and a staple of the series, Carmona is also well aware that nobody is safe in a summer season that has already seen previously unbeaten Sammy Valentin and past title challenger Romulo Koasicha suffer losses in major shockers coming in consecutive Fridays earlier this month. Antonio Moran managed to survive the upset bug in a 6th round knockout of Guadalupe Rosales, although he had to storm through a firefight in order to prevail in their lightweight war last Friday in Mexico City.

"Who wants to waste a Friday night in the summertime staying home for a fight where you can easily predict the outcome long before it happens," points out Zabala Jr. "All of our main events this year have brought something different, and this summer season—pardon the (pun)—has been hot. You always have to end with a bang, and that's what both of these kids can expect the moment the opening bell rings this Friday night in Kisssimmee."