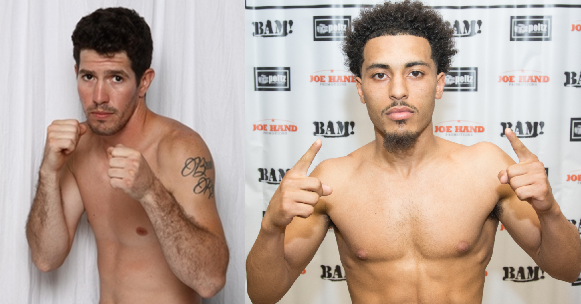 Junior lightweight Avery Sparrow, who insists on “meaningful fights” to boost his resume, finds himself in with another toughie when he boxes former four-time Canadian national amateur champion Joey Laviolette in the scheduled eight-round main event Friday evening, Sept. 8, at the 2300 Arena.

The Sparrow-Laviolette contest tops a nine-bout card which begins at 7.30 pm.

Sparrow, 23, is having a good year. In his last fight June 27 at the Sands Casino Bethlehem (PA), Sparrow scored two knockdowns and was knocked down twice himself while earning a unanimous six-round decision over previously unbeaten (6-0) southpaw Isaelin Florian, of the Dominican Republic. Earlier in 2017 at the 2300 Arena, Sparrow scored the fight’s lone knockdown while scoring an eight-round split decision over crosstown rival Anthony Burgin.

“It’s a big opportunity to showcase my skills against a good fighter,” Laviolette said. “This will be my first professional fight outside of Canada, but going to somebody else’s hometown to fight never bothered me as an amateur and I don’t think it’ll bother me as a professional.”

“I feel I’m right where I need to be at 6-0 and this is a perfect point in my career to have a true test against Sparrow.”

A pro since 2012, Laviolette (below left) has boxed twice this year against a pair of Mexican featherweights. He out-pointed Juan Manuel Benitez over four rounds and stopped Emmanuel Villamar in six. Both fights were in New Brunswick, Canada.

“I really don’t care how many amateur titles he (Laviolette) won,” Sparrow said. “For all I care, he could have gone to the Olympics and won a Gold Medal. But this in Philadelphia and I’m a Philadelphia fighter.”

The six-round junior middleweight semifinal features the return of Philly-Killer Roque Zapata, of Culpeper, VA. In two previous trips to the 2300 Arena, Zapata (4-1-3) has beaten local standouts Isaiah Wise and Fred Jenkins, Jr. This time he goes against Elijah Vines, of the Germantown section of the city, who is 4-0, 4 K0s.

Fighting unbeaten opponents in their hometowns is nothing new for the 21-year-old Zapata, who upset previously undefeated local hero Justin Steave (6-0) on June 24 in Pittsburgh, PA.

Vines represents the fifth undefeated fighter Zapata has faced, all on the road. The 22-year-old Vines stopped Harry Tyrone Paige, of Batesville, AK, in his last fight June 10 in Atlantic City, NJ. The fight with Zapata will be Vines’ first local appearance, having boxed twice in Atlantic City and twice in Bristol, PA.