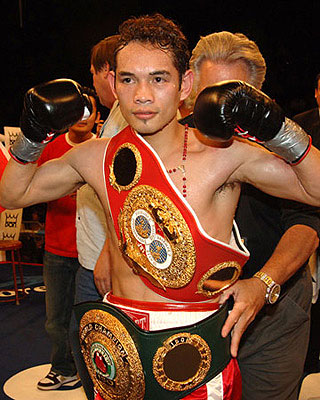 More than six years ago, Nonito Donaire made a play to sign with a Richard Schaefer-led promotional outfit with the intention of securing a title fight with Abner Mares.

Amazingly, that fight remains a distinct possibility, along with plenty of other featherweight options thanks to his latest move. The former four-division champ inked a promotional pact—this time, free of conflict—with Schaefer's Ringstar Promotions, in an announcement through the company's press office Tuesday afternoon.

"Exploring what was out there in the new landscape of boxing was unnerving and exciting at the same time," said Donaire, who parted with Top Rank on good terms earlier this year while seeking the next step in his already spectacular career. "I have known Richard for many years and have always respected what he has been able to do for the fighters he promotes."

Donaire's previous attempt to ink with the California-based promoter came in 2011, when he announced an abrupt departure from Top Rank—just three months after annihilating Fernando Montiel in two rounds to pick up two bantamweight belts—to sign with Golden Boy Promotions back when Schaefer was still the company's CEO. The move was accompanied by plans for a bantamweight title unification showdown with a then-unbeaten Mares, but the bout—and the promotional agreement—fell by the wayside as legal snafus prompted Donaire to return to Top Rank.

All told, the now-34 year old Fil-Am boxing star enjoyed eight years worth of ring time the Las Vegas-based outfit that included the tail end of his flyweight title reign along with belt-winning efforts at bantamweight, super bantamweight and featherweight. He also enjoyed a brilliant run in 2012, scoring four wins in establishing dominance at super bantamweight in a run that earned him Fighter of the Year honors.

It preceded his first loss in 12 years, dropping a 12-round decision to Guillermo Rigondeaux in their April '13 World super bantamweight championship clash. The setback snapped a 30-fight win streak following a defeat in his second pro fight, but he rebounded to claim a featherweight belt as well as a second super bantamweight title run. The latter reign ended with a disputed points loss to Jessie Magdaleno last November, having not fought since then.

Efforts were made to secure a rematch with his unbeaten conqueror, but failure for such a fight to materialize resulted in the end of his nine-year run with Top Rank. Once he declared his intentions to continue a brilliant career that began way back in 2001, it was a slam dunk decision for the Ringstar brass to secure his services.

"Nonito is one of the modern day legends of our sport," said Schaefer, Chairman and CEO of Ringstar Sports. "One of these rare fighters that always delivers and always knows how to entertain! I am convinced that he will again become one of the pound for pound best fighters in the world. No doubt about it!

"I want to thank his wife and manager, Rachel Donaire as well for the trust she places in me. We can't wait to get going!"

Preliminary plans call for the relationship to manifest into a ring return by late September or early October. With a win, Donaire will be groomed for the winner of Mares' rematch with Leo Santa Cruz in their planned featherweight title consolidation clash which is tentatively slated for October 7 in Los Angeles. Also being considered are the likes of reigning featherweight titlist Lee Selby and former two-division champ Carl Frampton.

A clash with any of the aforementioned meant proper political alignment, further justifying his latest career move.

"At this point in my career I want the biggest fights possible and Richard's track record to deliver them speaks for itself," notes Donaire. "The thought of the mega-fights against the likes of Mares, Santa Cruz, Selby or Frampton gets my blood boiling.

"The next chapter of my career is starting now and I am excited to say that it is with Ringstar."