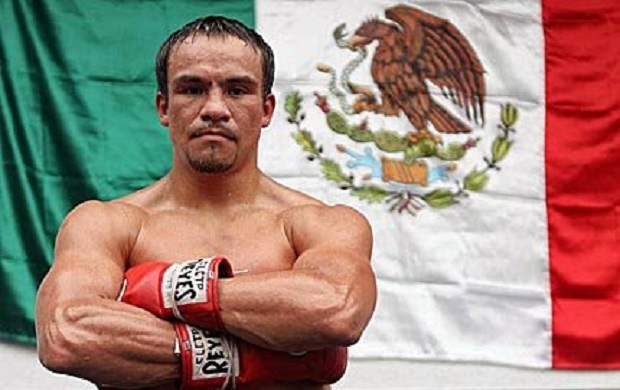 Add another name to the list of fighters who are recently hanging up their gloves for good. Juan Manuel Marquez, who has won world title belts in three different weight divisions and scored an emphatic knockout victory over Manny Pacquiao, is scheduled to announce his retirement from boxing.

According to ESPN's Salvador Rodriguez, Marquez will make an announcement on Friday.

Marquez (56-7-1, with 40 knockouts), who began his pro career with a disqualification loss to Javier Duran in 1993, has not fought since winning a 12 round unanimous decision over Mike Alvarado in May of 2014.

Marquez, who will turn 44 on Aug. 23, has been training for a return to the ring over the last several months, but a recent injury to his left shoulder during training camp is reportedly what sidelined the Marquez again.

The injury to Marquez is the latest in a number of ailments and injuries he has suffered since the Alvarado fight.

If Marquez is indeed retiring, his accomplishments should carry him to a first-ballot entry into the International Boxing Hall of Fame in Canastota, New York.

Since the Duran fight in 1993, he would go on to win his next 29 bouts in a row before losing to Freddie Norwood by decision in 1999. He would go unbeaten in his next 16 bouts since the Norwood fight, winning a world featherweight title in the process.

While he also has victories over Joel Casamayor, Michael Katsidis, and Orlando Salido, Marquez is best known for his four bouts with Manny Pacquiao.

Marquez fought to a draw in the first fight in May of 2004, would lose his next two bouts by razor-thin decisions, but scored a highlight-reel knockout over the Filipino fighter in December of 2012.

The impending retirement announcement conflicts with what Fernando Beltran, who promotes Marquez, told FightNights.com on July 15 in Inglewood, Calif.

"Juan Manuel will absolutely fight this year," said the head of Zanfer Promotions. "He will fight later this fall."

Marquez, who goes by the nickname of 'Dinamita,' is the latest in a line of handful of fighters tat have announced their retirement in recent days. According to RingTV.com last week, Bradley is on the verge of announcing his retirement, while heavyweight Wladimir Klitschko announced his retirement on Thursday.