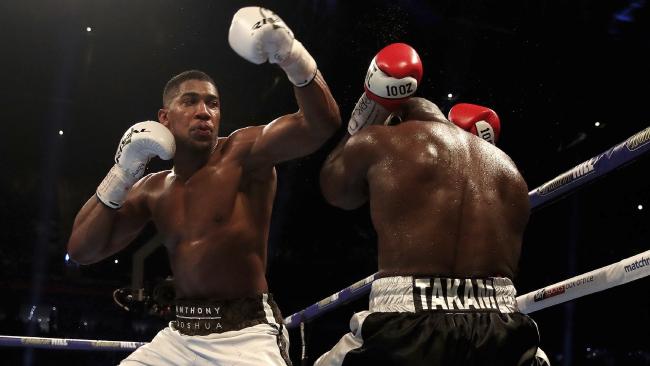 It didn’t end as early as early as many predicted, but Anthony Joshua stopped replacement opponent Carlos Takam in the 10th-round to extend his perfect knockout percentage on Saturday at Principality Stadium in Cardiff, before a sold-out crowd of 78,000, to retain his heavyweight titles.

Joshua (20-0, 20 KO’s), 28, who captured Olympic gold at the 2012 London Olympics, dropped Takam with a left hook in the fourth round, and opened up nasty gashes over both eyes.

However, after taking a series of blows, including an uppercut, in the 10th round, referee Phil Edwards bizarrely called a halt to the action. Takam didn’t appear to be in any trouble and was robbed of an opportunity to finish on his feet. The controversial stoppage, though, didn’t bother Joshua, who finished his 2017 on another high note.

“I have no interest in what’s going on with the official, that’s not my job,” said Joshua. “I was watching him, I was trying to break him down round-by-round, and unfortunately the ref stopped it.”

Joshua took some damage in the bout. He was jarred by a head-butt in the second round that appeared to break his nose and blood was clearly visible.

Even as the fight wore on, it appeared Joshua was bothered by the pain, and he was breathing heavy.

In the fourth round, Takam got a little bit cocky. He let out a smile and was greeted by a right hand that opened up one of the two nasty gashes above his right eye. The 2004 Olympian pawed at the injury before Joshua sensed blood and pummeled him.

Joshua connected on a brutal uppercut in the sixth round, the same punch that set up the ending to his memorable clash in April with the now-retired Wladimir Klitschko, but Takam showed incredible guts.

He never landed anything significant, but Takam fought in spurts to survive, albeit, as exemplified by the state of his face, took quite a bit of damage.

Wilder (38-0, 37 KO’s), 32, a 2008 Olympic bronze medalist, as his record shows, is an incredibly hard puncher. The Tuscaloosa, Alabama, native faces Bermane Stiverne in a mandatory rematch on Nov. 4, and a fight with Joshua could potentially be a Fight of the Year candidate.

“Deontay Wilder, he talks a lot, he’s not really fighting anybody. Deontay Wilder against Anthony Joshua has to happen,” said Joshua’s promoter, Eddie Hearn, of Matchroom Sport. “There’s also a great fighter named Tyson Fury; he needs to come back. [Joshua] will give you the fights that you want, I promise you that. Deontay Wilder, Tyson Fury, Joseph Parker, those are the 2018 fights.

“Deontay Wilder will be relieved of that [WBC] belt in 2018 by Anthony Joshua.

It was just the second time in Joshua’s four-year professional career that he reached the 10th round, but the 6′ 6″ 254-pounder has never faced a fighter in his prime and with the power that Wilder possesses.

When Joshua-Wilder takes place, it could be one for the ages.