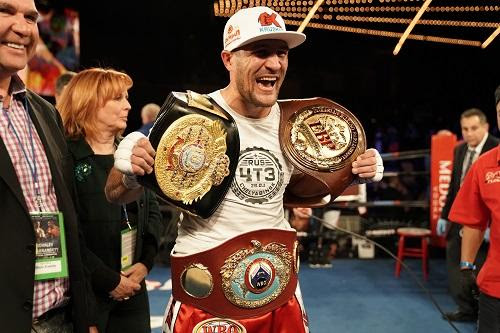 By current market standards, Sergey Kovalev is right back to where his career was prior to back-to-back-losses to Andre Ward—with a belt around his waist, and reigning as among the top televised draws in the sport today.

The knockout artist from Russia returned to the top of the light heavyweight mountain following a one-sided 2nd round knockout of Vyacheslav Shabranskyy in their Nov. 25th vacant light heavyweight title fight. The headlining act of a live HBO tripleheader from The Theatre at Madison Square Garden in New York City drew an average of 869,000 viewers, with the brief affair peaking at 900,000 viewers, all according to Nielsen Media Research.

For the moment, the bout serves as the second-highest rated HBO-televised match of 2017, only behind Terence Crawford's dominant stoppage win over 2008 Olympic Gold medalist Felix Diaz this past May. It also serves as the third-most watched premium cable fight of the year, trailing Crawford-Diaz and Mikey Garcia's catchweight win over Adrien Broner this past July on Showtime.

While HBO still has three shows left in 2017—one of which includes the wildly popular Miguel Cotto in the final bout of his Hall of Fame-level career—the network remains without a single match to crack an average of one million viewers on the year. Crawford-Diaz peaked at above 1 million, but barring big numbers in any of the final three telecasts of 2017, the network could be looking at its first year without cracking that mark since Nielsen Media Research has compiled such data for premium cable broadcasts.

It's also Kovalev's first time failing to crack the two-comma mark in a live primetime bout since his July '14 knockout victory over Blake Caparello, which also ended in two rounds. His aforementioned win over Shabranskyy marked his 10th appearance on HBO's flagship station either live or same-day, but his first since a 12-round victory over Isaac Chilemba which aired via tape delay from Russia.

His network debut came in Aug. '13, destroying Nathan Cleverly in less than four rounds to begin his first title reign with a monster road win in Cardiff, Wales. Since then, he has become a network staple, to the point where it denied him the opportunity to face lineal champion Adonis Stevenson, who long ago made the decision to flee to Showtime or any other network affiliated with adviser Al Haymon and his Premier Boxing Champions circuit. The two were once on a collision course, even sharing the same telecast in Nov. '13.

The occasion marked Kovalev's second-best network pull, drawing more than 1.25 million viewers for a 2nd round knockout of Ismayl Sillakh on the same night Stevenson registered a 6th round stoppage win of Tony Bellew. The night was one of six occasions on which an average of more than 1 million viewers tuned in to watch him ply his trade. The best of the lot came in a career-defining 12-round shutout of Bernard Hopkins to unify three light heavyweight titles. The Nov. '14 clash averaged 1.328 million viewers, his most watched bout to date.

Since then came a pair of wins over Jean Pascal—both of which surpassed 1.1 million viewers—and a July '15 stoppage win of mandatory challenger Nadjib Mohammedi,

The rematch victory over Pascal last January marked his last network appearance live in primetime. His win over Chilemba aired via same-day tape delay, while his pair of losses to Andre Ward both first aired live on Pay-Per-View, with HBO picking up the exclusive replay one week later.

A lot has changed since the repeat win over Pascal and the climate of today's market. Not since Gennady Golovkin's two-round torture of overmatched Dominic Wade has any live premium cable bout—HBO or Showtime—surpassed an average of 1 million viewers. Not even the return of Cotto this past August—his first live appearance on HBO's main network since a June '15 knockout win over Daniel Geale—could restore past magic. The event had the misfortune of going head-to-head with the circus in Las Vegas that was Floyd Mayweather's unretirement—and subsequent farewell party—as he stopped Conor McGregor in the 10th round of a Showtime Pay-Per-View that sold well north of 3 million PPV units (some unconfirmed sources even insisting 4 million units sold).

Cotto has a shot at viewership redemption as he closes out a 17-year career with an HBO-televised clash versus Brooklyn's Sadam Ali this Saturday live from Madison Square Garden—the main room being located just above The Theatre where Kovalev appeared for the first time.

The light heavyweight titlist plans to return to MSG in March '18, where it is hoped that he can help turn around a market that—while on the rise from where it was a year ago—still has a long way to go before congratulatory pats on the back can take place.

- Sullivan Barrera scored a 12-round decision over Felix Valera in a light heavyweight bout which which drew an average of 760,000 viewers, with a peak of 805,000 viewers;

- Yuriorkis Gamboa managed a highly questionable 10-round decision over Jason Sosa in their super featherweight scrap, which averaged 763,000 viewers and peaking at 846,000 viewers.