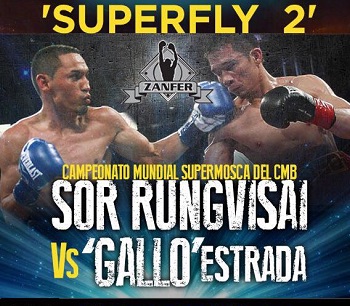 When Srisaket Sor Rungvisai and Juan Francisco Estrada posted major wins on the same show this past September, the natural next step seemed to be to match them together.

Doing the right thing and what actually happens in this sport don't always align, but the boxing gods thankfully got it wonderfully right this time around. The pair of super flyweight stars will meet in a WBC-mandated title fight set for February 24 live on HBO from The Forum in Inglewood, Calif., K2 Promotion's Managing Director Tom Loeffler announced on Saturday.

Lance Pugmire of LA Times was the first to report the news that has already served as an early holiday present to boxing junkies.

“It’s very exciting to announce the main event for the second installment of our Superfly series," Loeffler told FightNights.com via email. "With the tremendous response from fans and media from our first event and overwhelming anticipation to our second, we join boxing fans in saying that we ‘can’t wait’ until February 24 at The Fabulous Forum.

“Srisaket Sor Rungvisai had a remarkable year in 2017 upsetting ‘Chocolatito’ on March 18, 2017 at Madison Square Garden for the WBC Super Flyweight Title and defeating him again in his first defense on September 9 at the Stubhub Center at our first SUPERFLY event. Juan Francisco Estrada won a terrific fight against Carlos Cuadras on September 9 at the Stubhub Center and is very anxious to challenge for a world title in the super flyweight division against Sor Rungvisai.”

The first installment of the "Superfly" series took place this past September at the famed StubHub Center in Carson, Calif., with the venue infamous for churning out Fight of the Year candidates providing plenty of memories from arguably the best televised fight card of 2017. In the main event, Sor Rungvisai proved to critics his controversial points win over reigning pound-for-pound king Roman "Chocolatito" Gonzalez earlier in the year was not a fluke, emphatically stopping the former four-division champion in the 4th round of their HBO-televised main event.

It capped what could very well serve as a Fighter of the Year campaign on the year, with the Thai southpaw—who turns 31 on December 8—already looking to get an early jump on the 2018 race.

"“Juan Francisco Estrada is definitely among the top-class fighters in our division. When someone is a former unified champion that moved up without losing his titles, you know he is a world class fighter in his prime. However, I am confident that I will be successful in this fight because I will be at my best on fight night again. We will give the fans an incredible fight and I plan on another impressive win.”

It's a tall order for the diminutive slugger, as Estrada is nobody's pushover. In fact, the Mexican boxer has long served among boxing's very best until injuries cut short his flyweight title reign and left him on the sidelines to heel.

Prior to wresting a pair of flyweight belts from Brian Viloira in 2013, Estrada was best known for giving Gonzalez—then an unbeaten 108-pound titlist—the toughest fight of his career. The two slugged it out for 12 rounds at the now defunct Sports Arena in Los Angeles in Nov. '12, but with Estrada coming up just short in the end.

He came correct in his very next fight, outpointing Viloria to launch a flyweight reign that would span nearly three years before injuries forced him to vacate and eventually move up in weight.

All told, the 27-year old boxer-puncher from Hermosillo, Mexico has won 10 straight since the loss to Gonzalez. The most recent came on the undercard of Superfly I, scoring a 10th round knockdown of Carlos Cuadras—the last man to defeat Sor Rungvisai in winning the 115-pound crown in May '14—to score a narrow points win, although embarrassingly having to wait out an announcement error from Michael Buffer whom initially revealed Cuadras as the winner.

Once the correction was made, Estrada was confirmed as next in line for the winner of the evening's main event. There was little time wasted in securing the fight, with it just being a matter of finding the right time and place.

“I am very excited about facing Sor Rungvisai for the WBC Super Flyweight World Title on February 24 at The Fabulous Forum." states Estrada (36-2, 25KOs). "He will be a difficult challenge as he defeated Roman ‘Chocolatito' Gonzalez twice in a row with a vicious KO in their last fight. Sor Rungvisai is a very tough and skilled boxer so I will have to prepare very well to be ready to challenge him for his belt.”

The full undercard has yet to be announced, although it has been revealed that the telecast will be a tripleheader, entirely dedicated to the super flyweight division as was the case in September.

Expected to land on the show is Japan's uber-talented Naoya Inoue, the unbeaten two-division champ and reigning 115-pound titlist who made his stateside and HBO debut with a 6th round knockout Antonio Nieves on September's show. His announcement will likely come following the outcome of his scheduled New Year's Eve title defense in Japan, as he faces Yoan Boyeaux in the seventh defense of his title, and also his fourth consecutive New Year's Eve-centric showcase in Japan.

Also rumored to secure ring space in February are Cuadras—whose super flyweight title reign ended at the hands of Gonzalez in this very venue in their Sept. '16 thriller—as well as England's Khalid Yafai, an unbeaten titlist who would be making his U.S. and HBO debut.

“The Fabulous Forum has played host to many nights of memorable battles for more than 40 years," notes Loeffler. "[W]e expect this event to be another chapter in the annals of this iconic venue."

If it's anything like the inaugural installment of the Superfly series, then truer words will have never been spoken.