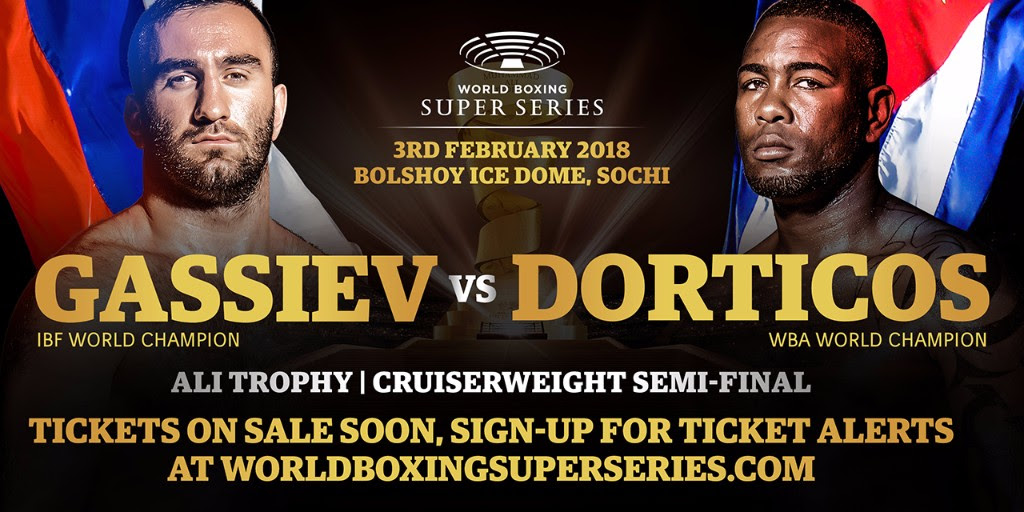 The first true potential Fight of the Year of 2018 is officially set.

“This fight is a very special one,” said Kalle Sauerland, chief boxing officer of Comosa, whose press office announced the site and date on Tuesday. “The level in the Ali Trophy tournament is already of the very highest, but when you have two such decorated boxers with massive KO power then the only guaranteed winner is the fans. Two World Champions collide in Sochi, this special Olympic City. Russia hold tight for the Ali Trophy experience, the lights and stars are on their way!”

Gassiev (25-0, 18KOs) and Dorticos (22-0, 21KOs) secured their spot in the WBSS cruiserweight semifinals with knockout performances in the lone two bouts to be staged in the United States.

Dorticos announced his arrival with an emphatic two-round knockout of Russian power-puncher Dmitry Kudryashov this past September in San Antonio. The bout didn't last long enough to develop into the Fight of the Yeat candidate that most anticipated, but provided a Knockout of the Year entrant along with a reminder of the depth in today's cruiserweight division.

“I am looking forward to fighting in Sochi," says Dorticos, a Miami-based Cuban who expected his clash with Kudrayshov to take place in Russia and is already mentally prepared for the road trip. "No matter where I fight, I will work hard to take my opponent out.

“I believe I am the best in the world and the future winner of the Muhammad Ali Trophy. I can’t wait to show Gassiev and the fans in Russia and all over the world what ‘The KO Doctor’ is about!”

Gassiev, the number-two seed in the loaded cruiserweight bracket, earned his spot in the semi-final when he tore through former titlist Krzysztof Wlodarczyk of Poland in three rounds this past October in Newark, New Jersey.

The win marked the first defense of the title he claimed in a 12-round win over countryman Denis Lebedev last December in Russia. He now gets to return home for this clash, although—like his opponent—was not at all concerned with where the bout landed as long as it takes place in a boxing ring.

“The location for the semi-final was not important for me, but the fact that it will be in Russia and the beautiful city of Sochi makes me very glad,” said Gassiev. “This means my family and friends and a lot of people from my home region of Ossetia will be attending. Also, it is always an honour and pleasure to fight in front of my countrymen,” said the 24-year-old and expresses a lot of respect for his upcoming challenge.

“Dorticos is a very good dangerous fighter. It is going to be great to test my skills against an opponent like him. I am confident we will deliver great boxing for fans around the world.”

Ticket prices and sale date will be announced in the coming weeks.

The winner will go on to the finals, facing whomever prevails in yet another cruiserweight unification clash between unbeaten titlists Oleksandr Usyk and Mairis Briedis. The finals will take place next May in Jeddah, Saudi Arabia.