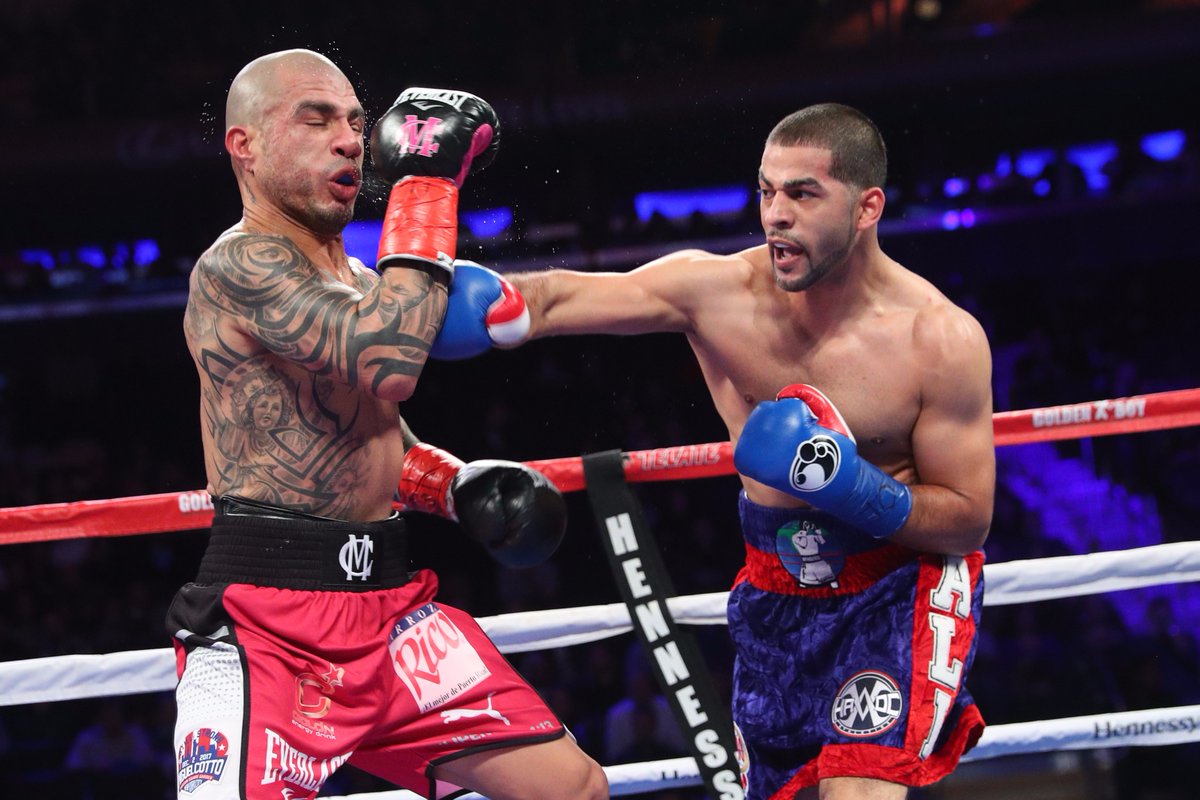 Oddly enough, when all was said and done the only one who didn't have cause to celebrate Miguel Cotto's farewell bout at Madison Square Garden... was Cotto himself.

Sadam Ali pulled off one of the biggest upsets of 2017 and a career-defining win in the process in taking a well-earned unanimous decision over the Puerto Rican superstar on December 2. Their HBO-televised headliner from Madison Square Garden in New York City played to an average of 944,000 viewers and peaking at 1.012 million viewers, according to Nielsen Media Research. The final average places it second only to unbeaten 140-pound king Terence Crawford's one-sided stoppage of 2008 Olympic Gold medalist Felix Diaz among the most watched premium cable TV bouts of the year.

Fittingly, both served as main events at Madison Square Garden, the world famous arena where Cotto has sold more tickets than any other boxer in the 21st Century. Sadly, his 10th and final appearance at the venue ended in bitter defeat, as a claimed biceps injury slowed his attack in the second half of the contest, at which point Ali surged ahead to annex a super welterweight title and name his price for a big fight in 2018.

It marked Cotto's second HBO-televised appearance of 2017, with far more eyeballs on his bout than was the case in a 12-round win over Yoshihiro Kamegai this past August. The night marked his triumphant return to the ring following a 21-month ring hiatus, but had the misfortune of going head-to-head with Floyd Mayweather's 10th round knockout of Conor McGregor on Showtime Pay-Per-View, an event which generated the second-best PPV seller in history.

Prior to 2017, Cotto hadn't appeared on HBO since a June '15 knockout win over Daniel Geale, which drew 1.589 million viewers at a time when boxing audiences were at its peak. A slow-moving 2016 for the sport deterred viewers not only from tuning in but sticking around even as industry insiders put its best foot forward in making terrific matches throughout the year.

With the latter being taken into consideration, the final viewership tally for Cotto's swan song is respectable if not overwhelming cause for celebration.

Regardless, it wraps up a Hall-of-Fame career, who bows out at 41-6 (33KOs) and serving as the only male boxer-ever from Puerto Rico to win titles in four separate weight classes. He enjoyed two separate tours as a 154-pound titlist, making two successful defenses of his first reign before conceding the belt to Floyd Mayweather in what landed as the best-selling PPV event of Cotto's 17-year career.

The Mayweather bout marked also one of nine HBO PPV events he headlined, while appearing live on HBO's flagship network another 15 times including 12 main events. His title wins at 140, 147, 154 and 160 helped establish a historic run among the all-time boxing greats from Puerto Rico, soaring to such heights following his June '14 knockout of Sergio Martinez to win the World middleweight championship. One successful defense came of the reign before losing to Saul 'Canelo' Alvarez in their Nov. '15 superfight, which generated 940,000 PPV buys.

All told. Cotto leaves behind a legacy as among the best boxers and also one of the biggest draws of his generation. Much of the credit for his star power needs to be attributed to Top Rank, the legendary Las Vegas-based company who signed him following his representing Puerto Rico in the 2000 Sydney Olympics. Their on-and-off 14 years spent together including a tradition of Cotto headlining at Madison Square Garden on the eve of the Puerto Rican Day Parade, beginning with his 5th round knockout of Mohammed Abdullaev and running three more times along with an off-site appearance on that very weekend at the lone boxing card to take place at Yankees Stadium in the 21st Century, when he stopped Yuri Foreman for his first 154-pound title win in June '10.

His career now comes to a close. fittingly with ratings data for his farewell bout released on the same day as the news release for the next class for the International Boxing Hall of Fame—which will undoubtedly land in Cotto's future, not very long after he's eligible for voting consideration.