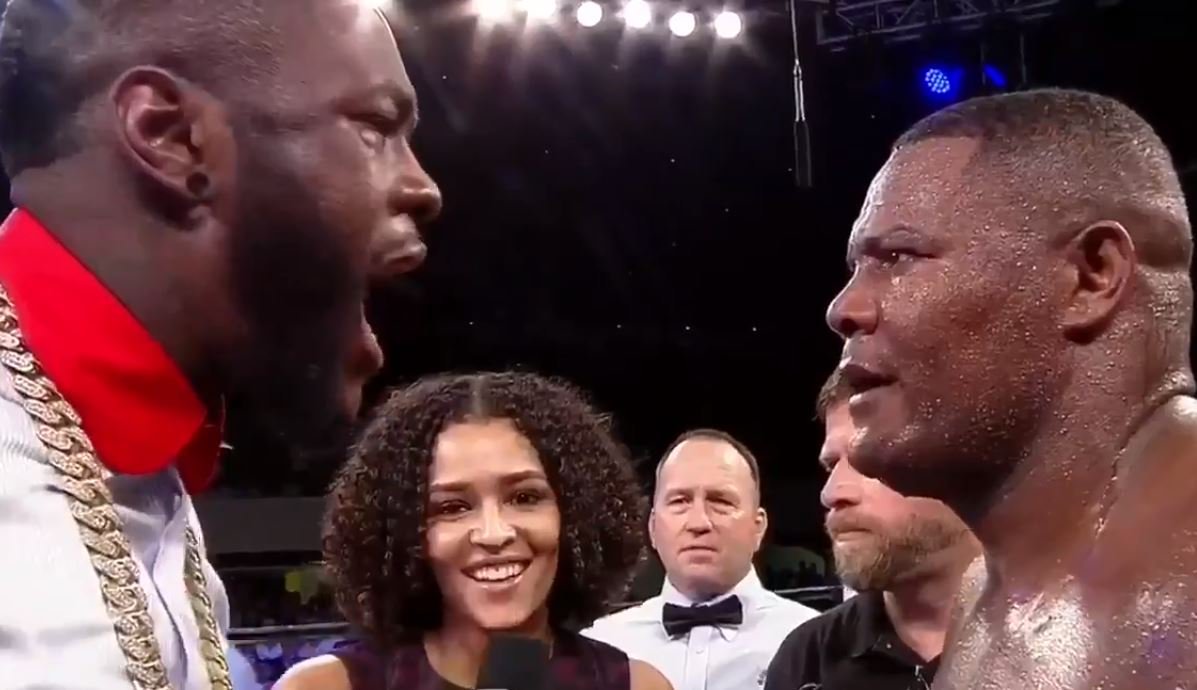 Deontay Wilder thought he was forever done with Luis Ortiz once a drug testing snafu killed their plans for a November 4 showdown in Brooklyn.

Apparently the unbeaten heavyweight titlist not only has the southpaw contender back in his life, but is highly motivated to make that problem go away on his own.

"He's cleared to fight again, so ain't nothing I can do about it except get him in the ring and whoop that boy's ass," Wilder told FightNights.com while ringside for Ortiz's 2nd round knockout of Daniel Martz on Friday in Hialeah, Florida. "What went down in the past don't matter, I guess. The WBC say he's a contender so now we got to make it happen in the ring."

A clerical error on the part of Ortiz in failing to disclose a prescribed blood pressure medication he was taking resulted in his testing positive for two banned substances ahead of his eventually canceled clash with Wilder. The 38-year old Cuban was relegated to ringside as Wilder instead entered a rematch with Bermane Stiverne, whom he outpointed to win his title in Jan. '15 and destroyed in one round this past November.

Wilder admitted to entering the rematch with pent-up anger. The Alabama native was furious over the amount of time it took for Stiverne and his team—"promoter" Don King and manager James Prince—to come to terms for their mandatory title fight rematch, along with Ortiz becoming his third scheduled opponent to fail a drug test in a span of 18 months.

The World Boxing Association, whom rated Ortiz (28-0, 23KOs) as their mandatory challenger, issued a one-year suspension and a hefty fine. Apparently, the penalties imposed were limited to the Panama-based sanctioning body alone, as the World Boxing Council—whose belt Wilder proudly holds—merely issued a $25,000 fine and cleared Ortiz to resume his career.

That ruling led to the Miami-based Cuban to return to the ring on Friday, appearing in the chief support of a Premier Boxing Champions (PBC) quadrupleheader live on FS1 from Hialeah, Florida, mere miles from his hometown.

As spectacular as was his knockout of West Virginia's Martz (16-6-1, 13KOs), the real attraction came seconds later. Ortiz leaned through the ropes to issue an immediate challenge to Wilder, who served as a guest commentator during that portion of the telecast.

"My team and I went to the (Wilder-Stiverne rematch) that should've been my title challenge, and they acted like we weren't even in the building," Ortiz (28-0, 24KOs) explained to FightNights.com. "So when I saw him here, I wanted to make sure to acknowledge it and to let him know in no uncertain terms that I want him next."

Wilder received the message loud and clear—and had one of his own in return.

"He came through the ropes talking that (stuff), but his whole demeanor changed when I was face-to-face with him in the ring," Wilder quipped. "The WBC say he's free and clear to fight. So now I'll just go ahead and handle that Luis Ortiz problem for the WBC and keep moving toward my goal of becoming undisputed heavyweight champion.

"The rest of them belts can come when the other champions are ready to talk for real. Luis Ortiz wants this fight next, so now we gonna go ahead and make that happen."