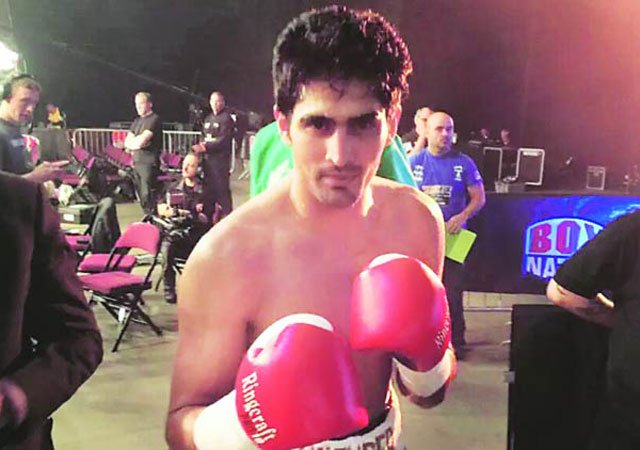 It wasn't the ideal in-ring campaign he had in mind for 2017, but Vijender Singh at least had the chance to close out the year on a high note.

The most successful amateur boxer to ever come out of India ends 2017 with a perfect 10-0 mark, following a 10-round shutout victory over Ghana's Ernest Amuzu on Saturday in Jaipur, India.

All three ringside judges scored the contest 100-90 in favor of Singh (10-0, 7KOs), who has now been extended the distance in three of his past four starts.

Singh was the first-ever boxer from India to win an Olympic medal, capturing Bronze in the 2008 Beijing Olympics. The athlete/actor—who represented India in three Olympic Games (2004, 2008, 2012)—remains the only male boxer to accomplish such a feat, with 2012 Olympic teammate Mary Kom the only other from their nation to medal. His pro career came with a lot of hype, but he hit a few potholes over the course of his 2017 campaign.

An ugly split with co-promoter Frank Warren was announced in May, with their differences resulting in his not fighting at all during the first half of the year. The two sides eventually reconciled, though only leaving room for two fights in 2017 including Saturday's affair.

Some four months after barely getting by Zulipikaer Maimaitiali in a 10-round decision, Singh was once again forced to labor toward victory. His clash with Amuzu wasn't nearly as competitive, nor as entertaining.

The first few rounds were fought at a deliberate pace, with Singh picking up steam in round six. Amuzu did his best to stand and trade, but couldn't make the speed—or skills—of the regional hero as he was outgunned in every round. The threat of a knockout surfaced in the later rounds, but Singh was forced to back off and play possum after reportedly suffering a pulled muscle down the stretch.

Amazu falls to 23-3 (21KOs), snapping a four-fight win streak—with his last loss dating back to his previous road trip in Frankfurt, Germany after having spent most of his career fighting in Accra, Ghana.

Singh headlined in India for the fourth straight time after staging his first six bouts in England. The heart of his split with Warren was due to claims of the veteran British promoter failing to live up to contractual promises. It remains to be seen if part of their reconciliation includes trips to the UK in 2018 and beyond, as he developed a reputation as an attraction and a crowd favorite on two continents relatively early in his career.

For now, the plan is to remain more active while escalating competition level as his team eyes a title shot or eliminator by this time next year. The three-time Olympian and Bollywood star remains a Top 10 super middleweight contender according to the World Boxing Organization (WBO), having defended a regional title in Saturday's win.

The bout aired live on Sony Six, an English-speaking network in India.