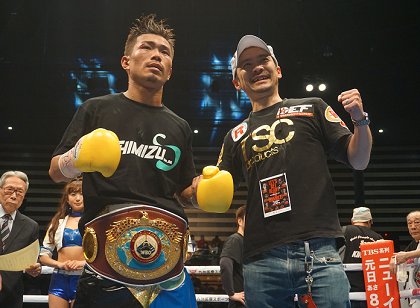 An onslaught of punches on a battered Igarashi forced the stoppage at 2:34 of round nine.

Kimura was generally in control throughout the evening, although Igarashi managed to make his presence felt as he always has—through clean punches and not-so-clean grappling. Action was a bit slow out the gate, with both boxers attempting to find their range in a fight whether neither boasted any sort of statistical advantage.

As the night wore on, it was the fresher Kimura who was able to win the battle of attrition. His pressure attack eventually wore down Igarashi, who was forced to defend against a swarm of punches while also contending with facial swelling and eventually what was believed to be a broken jaw suffered in the middle rounds.

A clash of heads—an Igarashi signature—threatened to pre-empt the title fight, but only prompted Kimura to take matters into his own hands. A barrage of punches had Igarashi looking worse for the wear in round eight before finally wilting in round nine, as referee Katsuhiko Nakamura intervened to rescue the former lineal flyweight king from absorbing additional and unnecessary punishment.

It's perhaps the last call for Igarashi, who falls to 23-3-3 (12KOs) in a failed bid to become a two-time flyweight champ. He reigned as World champion from the time of his July '12 win over Sonny Boy Jaro until being dethroned by countryman Akira Yaegashi in April '13. He's managed an eight-fight win streak leading up to this bout, but no longer resembles a serviceable flyweight contender, at least not after these last nine rounds.

Meanwhile, it's just the beginning for Kimura whose career-best year included a massive upset stoppage win over two-time Olympic Gold medalist Zou Shiming to win a flyweight title this past July on the road in Shanghai—his second straight fight in China. His return home was wildly successful as he runs his record to 16-1-2 (9KOs) while registering his third knockout victory in as many fights in 2017.

The bout aired live on TBS in Japan.