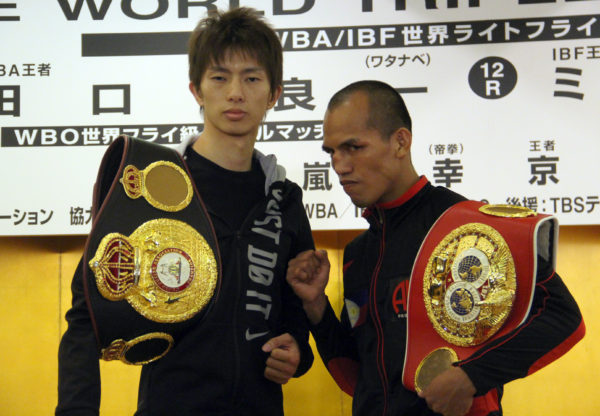 The Fighter of the Year race has now officially concluded.

Milan Melindo was unsuccessful in upsetting the apple cart, as his memorable run in 2018 came to a bitter close when Ryoichi Taguchi scored a well-earned 12-round decision in their junior flyweight title unification clash.

The bout was a blood-soaked war of attrition, though not the type of clash that will be found in the Fight of the Year running. Frequent head clashes marred an otherwise entertaining affair, with both titlists fighting tooth and nail in the first half of the contest before Taguchi took over in the back six.

Melindo sought to assert himself as the aggressor early on, befitting of his general fighting style but also a wise tactic considering that straight boxing wouldn't get the job done on the road against a top talent in Taguchi. His strategy was enough to barely edge the opening round, rattling the local hero with a left hook but never landing anything to the point of dramatically turning the tide.

Conversely, Taguchi was able to dictate the pace for the much of the evening through a healthy mix of boxing and controlled aggression. Combination punching began to fluster Melindo, whose efforts to work his way inside and minimize a massive height and reach advantage lead to the bout's first clash of heads in round three. The sequence left the Filipino boxer cut over his left eye, though ultimately not as much of a factor as figuring out a way to seize momentum.

The threat of a tide turning shift came in round five, when Melindo was able to work in a body attack that momentarily stalled Taguchi's progress. It made for close action to the naked eye, but with Taguchi still landing the cleaner punches.

Melindo's last hurrah came in a horrific-to-watch round nine, with another headbutt taking place and this time rattling Taguchi. Making the bout as ugly as possible seemed to be the best bet for the visiting titlist to rally from behind and wrap up would would be—with a victory—a strong case for 2017 Fighter of the Year following title fight wins over Akira Yaegashi and Hekkie Budler.

Taguchi removed that threat altogether in an action-packed round ten before closing strong in the championship rounds. Melindo never stopped putting his best foot forward, but took enormous punishment down the stretch.

It was enough to provide Taguchi with a case for the best junior flyweight on the planet, although a strong argument will come from countryman Ken Shiro who remained an unbeaten titlist with a 4th round knockout of Gilberto Pedroza one day prior. Still, he now serves as just one of five active unified titlists—joining Anthony Joshua (heavyweight), Gennady Golovkin (middleweight), Keith Thurman (welterweight) and Ryan Burnett (bantamweight)—in the sport today in running his record to 27-2-2 (12KOs).

Melindo's effort to surge ahead the likes of Terence Crawford, Vasyl Lomachenko, Srisaket Sor Rungvisai, Mikey Garcia and Joshua fall just short as his title reign comes to a close. His record falls to 37-3 (13KOs), ending a brief but fun junior flyweight title stay that started in Japan with a shocking 1st round knockout of Yaegashi this past May. A 12-round win over former long-reigning strawweight titlist Budler in September proved his title-winning effort was no fluke.

The effort put forth by Melindo on Sunday was admirable, but the final verdict in the end proving that Taguchi has officially advanced past protégé to current flyweight titlist Kazuto Ioka as he is now the junior flyweight to beat in 2018—and perhaps beyond.

The title unification clash headlined a New Year's Eve tripleheader, with the main event and co-feature (Sho Kimura's 9th round stoppage of Tohsiyuki Igarashi) airing live on TBS in Japan.