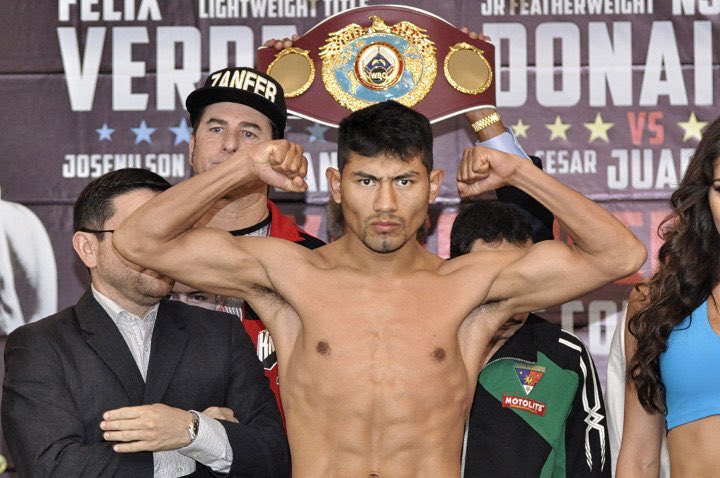 It's no secret that a shot at a secondary title versus Isaac Dogboe on the road was hardly Plan A for Cesar Juarez and his handlers.

That hasn't prevented the scrappy Mexican slugger from making it his top priority.

"It's not the perfect scenario like we had hoped," Sean Gibbons, Juarez' adviser explained to FightNights.com of how this fight came about. "Going from fighting World super bantamweight champion Jessie Magdaleno in Fresno, California live on ESPN to going to fight in Accra, the hometown of Dogboe for an interim title isn't how we envisioned winning the world title.

"But if anyone thrives on winning on the road, it's Cesar WAR-EZ!"

The turn of events is just the latest in a career filled with last-minute opportunities and being ushered in as the B-side on another promoter's show. From the time he turned pro as an 18-year old in Mexico to and through the heart of his prime, Juarez (20-5 15KOs) takes tremendous pride in his underdog status.

If anything, it provides him with additional motivation to disprove the naysayers and earning all of his in-ring achievements the hard way. It also gives him the advantage of bringing experience to the ring versus an unbeaten boxer in Dogboe (17-0, 11KOs) who enters his first title fight and arguably the toughest test of his career.

"I have proven in my career that I will fight anyone, anywhere, anytime and while I get ducked all the time I have no problem going to my opponent's home(town) to fight," Juarez said of the circumstances that led to this point. "I have the preparation, the talent and the heart to beat anyone in my division and I will prove it against Isaac Dogboe."

The 26-year old from Mexico City was really hoping to prove it against a more recognizable name with far more at stake. He was originally due to face Magdaleno last November in Fresno, on an ESPN-televised card topped by local hero Jose Ramirez in his career-best two-round stoppage win over fellow unbeaten prospect Mike Reed. A massive crowd of more than 14,000 was on hand for the event, but Juarez wasn't able to take part due to Magdaleno suffering an untimely injury and withdrawing from the title fight.

It led to an interim title opportunity coming to surface. However, it requires Juarez to once again stamp his passport as he travels halfway around the world just to fight for a title shot that was already supposed to come his way in 2017.

"This is nothing new for me," Juarez rationalizes. "I was never in the hands of a promoter that protected me, so I know that I have to go in there and look for the knockout from the first bell to the last as I want no surprises with a bad decision. I am ready for war and that's what I want to deliver to the fans, a fight that they will remember for a long time."

That very approach landed the veteran pug his first crack at a 122-pound title in 2015. He entered the year with a barely noticeable ring ledger of 15-3 (13KOs) and an inactive streak of well over a year as he was largely viewed as an opponent. Or so thought the handlers for one-time rising Puerto Rican prospect Cesar Seda, who was handled by Juarez in their March '15 affair that wasn't even as close as was suggested in the majority decision verdict.

Juarez parlayed the opportunity into a dangerous crossroads clash with countryman Juan Carlos Sanchez Jr., scoring a late knockdown to seal a well-earned points victory in their July '15 battle that led to the biggest fight of his career to date—a crack at the super bantamweight title.

While a win didn't come of his title bid versus four-division world champ Nonito Donaire, a storybook ending did come of their Dec. '15 war in San Juan, Puerto Rico. Juarez rose from two knockdowns in round four and the threat of being one punch away from his night ending to dragging Donaire through hell in producing the last true entrant in the 2015 Fight of the Year race. It was the type of performance that raised his stock even in defeat, although his Cinderella story eventually struck midnight in the form of a shocking points loss to countryman Giovanni Delgado just three months later in Mexico City.

Three consecutive wins have since followed, beginning with a stunning upset TKO victory over previously unbeaten Albert Pagara in July '16. Once again brought in as the opponent by the promoter of the main event fighter, Juarez threw Pagara for a loop, rising from an opening round knockdown to put his highly touted foe down and out in round eight to breathe new life into his career.

"What Cesar may lack in technical boxing skill, he makes up with pure heart and determination," insists Gibbons. "This is Cesar's destiny. He will not be denied on January 6 in Accra and he WILL bring the title back to Mexico!"

Given what it took to arrive at this point, facing an unbeaten house fighter on the road is hardly a new—or insurmountable—experience.

"I know what this fight means, and what a great opportunity this is to realize my dream of becoming a world champion," notes Juarez. "I will take full advantage of this opportunity and—like Sean said—bring the championship back home to Mexico, back home to everyone who has always believed in me. I will leave everything in the ring to win this fight."