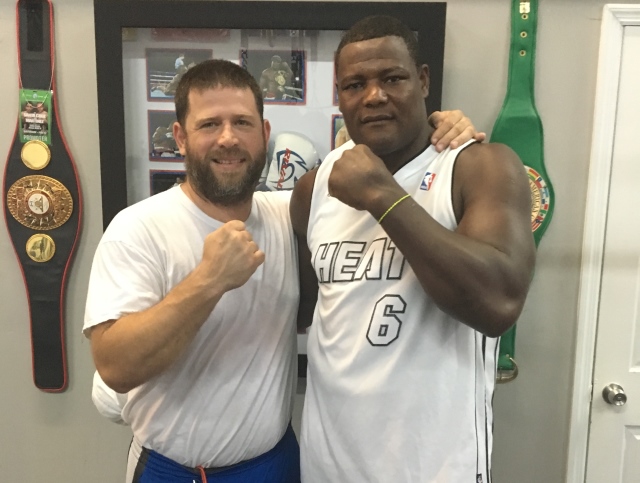 Deontay Wilder has absolutely nothing to do with the Florida Boxing Hall of Fame once again snubbing veteran trainer Herman Caicedo in announcing its Class of 2018 inductees.

However, it has apparently now become the unbeaten heavyweight titlist's problem.

Caicedo—the last remaining disciple of the legendary Angelo Dundee—has trained several champions and top talent throughout the Sunshine State, but these days is best known as the driving force behind former bantamweight champ Juan Carlos Payano and unbeaten heavyweight contender Luis Ortiz. The latter is Caicedo's biggest client—literally and figuratively—and is currently in training for a soon-to-be-announced March 3 showdown with Wilder at Barclays Center in Brooklyn, New York.

The heavyweights have verbally sparred through the media and have traded words in person, but their ongoing feud has now taken on a new wrinkle.

"All the talent that Herman has developed over two decades, all the champions that have come out of his gym and the (Florida) Hall of Fame (committee) still wants to tell him wait until next year," a frustrated Ortiz (28-0-0-1NC, 24KOs) rhetorically asked FightNights.com. "I guess I got to go out and take Deontay Wilder's title so my trainer has another world champion to show them."

Caicedo was passed over for veteran trainers Pat Burns and Jorge Rubio. Burns, a former cop and Vietnam veteran, has served the sport for more than 30 years since opening his first gym in 1983 and is best known for his work as an assistant coach for the 1996 U.S. Olympic team as well as his development of former two-time middleweight champion Jermain Taylor. Rubio's best work came during his time spent with the Cuban national team, although is infamously known in the pro ranks as the first pro trainer for Amir Khan, with the two parting ways when the Brit was starched in one round by Breidis Prescott early in his career.

Ironically, Ortiz could've made good on such a promise in time for the voting selection had he been able to go through with his scheduled clash with Wilder last November. The anticipated heavyweight scrap fell apart due to a clerical error on the part of Team Ortiz, failing to disclose prescribed blood pressure medication he was taking which was discovered during random pre-fight drug testing.

The World Boxing Council ultimately bought the alibi, but not in time to salvage the November 4 date, with Wilder going on to blast out Bermane Stiverne in less than a round during their rematch at Barclays Center. Ortiz—a 38 year old Cuban southpaw who literally lives in the gym during training as he has a room at Caicedo's sports complex in Miami—was free and clear to fight shortly thereafter, knocking out overmatched Daniel Martz in two rounds last December in Hialeah, Florida. Wilder was ringside for the occasion, and deeply entrenched in the post-fight melee as the two traded words along the ropes and again in the ring.

The seemingly-scripted moment paved the way for an eventual head-on collision, which is expected to be formally announced in the next few days. Wilder (39-0, 38KOs) will be attempting the seventh defense of a heavyweight title reign coming up on three years later this month. Ortiz has twice held an interim title, but still looking to become the first Cuba-born boxer to win a full heavyweight strap.

A win on March 3 would accomplish that feat, and add to Caicedo's already stellar résumé—although one that seemingly needs greater enhancement to catch the eye of the Florida Boxing HOF committee.

"Another year, another snubbing. I guess I just haven't kissed the right rings yet, who knows," a dejected Caicedo told FightNights.com. "Oh well, off to win another championship, I guess. March 3, Luis is working hard to bring that belt to Miami. There's not a lot of room left on our championship wall, but we'll find a space for it."