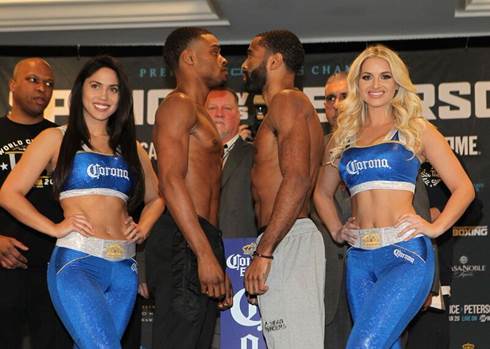 The first official Saturday night of championship boxing in 2018 is upon us, as Showtime presents a televised doubleheader live from Barclays Center in Brooklyn, New York.

In the main event, Errol Spence makes the first defense of his welterweight title as he faces former two-division titlist Lamont Peterson. Opening the telecast, unbeaten lightweight titlist Robert Easter Jr. faces Javier Fortuna in what is now a non-title fight after Fortuna was more than a full pound over the limit.

The evening’s headliner will end extensive inactive periods for two of the most fit athletes in the sport today.

Peterson (35-3-1, 17KOs) has been out since winning a secondary welterweight title in a 12-round decision over David Avanesyan last February. The D.C. native—who also reigned at super lightweight—was forced to give up his belt in order to enter this title fight, since a secondary titlist from organization cannot enter a unification bout with a titlist from another sanctioning body.

All told, Peterson will be fighting for just the second time in a span of 32 months, and for just the fifth time since the inception of Premier Boxing Champions (PBC) nearly three years ago. Part of the inactive period was by choice, but much of the past year was spent deciding whether to pursue his mandatory challenge of unified titlist Keith Thurman—whose ring returns are an annual event these days—or vacating for the sake of getting back in the ring.

Even more puzzling has been the grinding halt in the career of Spence (22-0, 19KOs), a 2012 U.S. Olympian considered one of the sport’s rising stars. His career arc hit new heights when 6 million viewers tuned in for an Aug. ’16 win over Leonard Bundu, strategically placed in between the 2016 Rio Olympic Men’s Basketball finals and the closing Olympic ceremony.

Spence—born in the Brentwood section of Long Island, New York but raised in the Dallas suburb of Desoto, Texas—has fought just once since then, a career-best achievement in an 11th round stoppage of Kell Brook last May on the road in Sheffield, England. The feat netted him a welterweight title, but sadly coming with a laundry list of excuses as to why he’d have to sit out for the rest of 2017 with just one fight on the year.

New hope has graced both boxers as the calendar flips to 2018, although only one man can prevail (barring a draw) as they collide Saturday evening in Brooklyn.

Here is how the staff at FightNights.com believes the action will go down:

Jake Donovan (Spence TKO6)—I expect the first few rounds to serve as an intense chess match. Both boxers are always in peak condition, and know to not expect a war of attrition but rather winning through ring smarts. Unfortunately for Peterson, he lacks the equalizer to keep the younger, fresher and naturally bigger Spence at bay. Look for Spence to surge ahead somewhere around round four, breaking down Peterson to the point of forcing him to wilt around round six.

Gabriel Gonzalez (Spence late TKO)—For the first couple of rounds we’ll see some cautious Boxing that will favor Spence. Spence will bait Peterson into an inside fight in the middle rounds leading to a stoppage, due to Spence’s speed and combination advantage.

Ryan O’Hara (Spence TKO4)—Peterson will box from the outside in the opening rounds, but Spence will cut off the ring and force him into an inside fight. Peterson gets caught with a counter left in the fourth round, which leads to a stoppage.