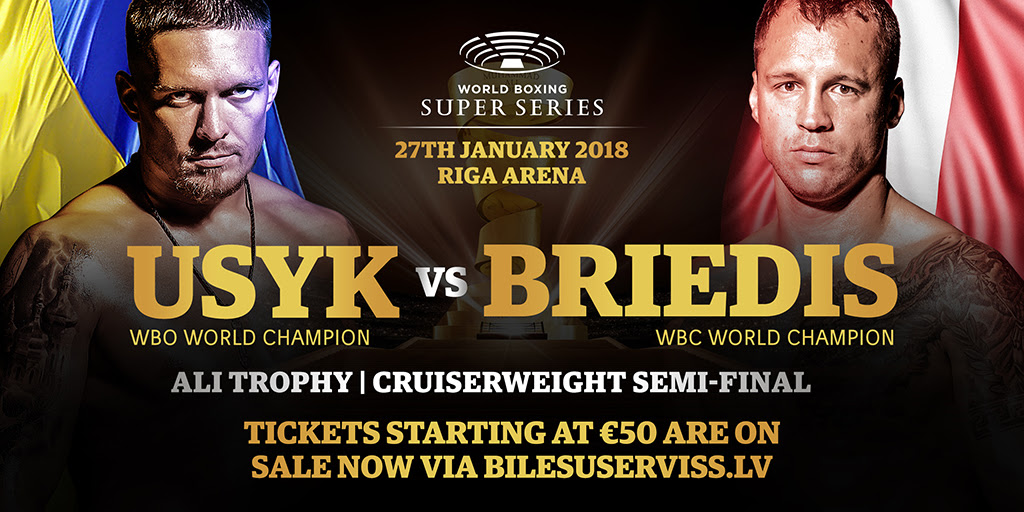 Whomever prevails will move onto the WBSS cruiserweight finals, where he will face the winner of the February 3 semifinal match—also a unification bout between unbeaten titlists when Murat Gassiev and Yunier Dorticos collide in a mouthwatering matchup of knockout artists live from Adler, Russia.

The first truly bad decision of 2018 has come live from Riga, as cruiserweight contender Micki Nielsen was extremely fortunate to escape with a split decision over locally based Ricards Bolotniks.

The dissenting score of 78-74 in favor of Bolotniks (10-4-1, 4KOs) appeared to be the right call, as the Latvian cruiserweight clearly outworked his Danish foe. It didn't translate in the final cards, as matching tallies of 77-75 spared Nielsen (25-1, 15KOs) the embarrassment of a major upset loss—although he has to now live with the fact that he was given a decision he clearly didn't deserve. As much was reflected in his post-fight demeanor, as his body language clearly indicated that he didn't expect to be given the victory.

Yoann Kongolo preserved his unbeaten record with a landslide 10-round decision over local journeyman Andrejs Pokumeiko. Scores were 99-89, 98-90 and 98-91 in facor of Kongolo (11-0, 4KOs), a squat boxer from Switzerland who was never in trouble at any point in the evening.

The majority of the bout was a monotonous affair, with Kongolo controlling the action and Pokumeiko dancing as hard as he could but never able to take the lead. The threat of a knockout never surfaced, not even when Kongolo scored a knockdown in round seven in further padding his already sizable lead. Scorecard relief was provided for Pokumeiko, when he suffered a cut from an accidental headbutt in the same round, resulting in a point deducted from Kongolo's score due to a severely outdated rule by the World Boxing Council (WBC), which punishes the uncut boxer in the even of a clash of heads opening a wound.

It didn't at all factor into the outcome, as Kongolo was a clear winner once the final bell sounded. Fittingly the bout ended with Pokumeiko stumbling backward to the canvas, although it was waved off as a slip. His record ultimately slips to 16-13-1 (12KOs), snapping an eight fight unbeaten streak.

Filip Hrgovic remains a young heavyweight to watch, following a 4th round knockout of Tom Little.

The 2016 Olympic Bronze medalist for Croatia has proven just as dominant in the pro ranks as was the case in brilliant amateur career. Still, this one wasn't as easy as the final line report will read as Hrgovic was made to work every step of the way versus Little, a scrappy British heavyweight who'd won three straight heading into the evening.

Hrgovic eventually settled into a groove in round three, landing his right hand at will which was bad news for Little. The onslaught continued through round four until the referee was forced to intervene at 2:15 of the round.

Interestingly, all three pro bouts for Hrgovic (3-0, 3KOs)—in addition to all ending in knockout—have come on undercards of World Boxing Super Series main events. His pro debut also took place in Riga, knocking out Raphael Zumbano Love in one round in a supporting bout to Briedis' win over Mike Perez to advance to the semifinals. One month later, the Croatian boxer tore through Pavel Sour also in a single round on the undercard of the final WBSS quarterfinal match when Jurgen Brähmer soundly outpointed Rob Brant in their super middleweight quartefinal in Schwerin, Germany.

The 2016 Rio Olympic bronze medalist Filip Hrgovich collected more experience in his bout against Little than he had in his first two bouts combined in the pro ranks. The Croatian heavyweight prospect seemed to be a bit over-anxious in the first frame before he found his distance in round two. Hrgovich landed his straight right hand hard and often until referee Daniel Van de Wiele called a halt to the bout in round four. Official time was 2:15.

The bout was never competitive as Wallin (19-0, 13KOs) broke down Goverdarica (6-6, 5KOs) with body shots, as said weapon of choice led to knockdowns in rounds two and three. It also provided a mercy stoppage as Goverdarica simply could not withstand any more punishment.

The 27-year-old Swedish pugilist settled his jab early in round one and dropped Govedarica (6-6, 5 KOs) in the second and third frames respectively thanks to calculated left hooks to the body. Wallin (19-0, 13 KOs), who is promoted by Sauerland Event, is on his way to become a challenger for the EBU title this year.