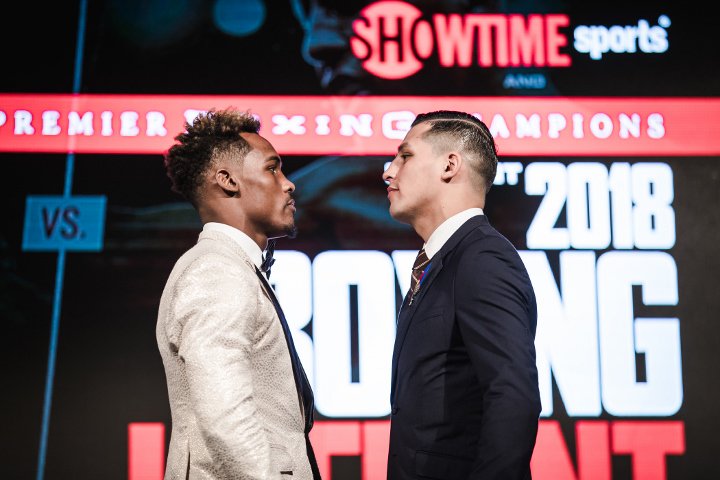 Jermall Charlo still has every intention of appearing at Barclays Center on March 3. Only now, the unbeaten middleweight will be in attendance as a spectator.

The former super welterweight titlist and leading middleweight contender was delivered the bad news of his planned March 3 interim title fight with Hugo Centeno pushed seven weeks when it was revealed his opponent suffered a rib injury during training camp. Their bout was due to serve as the chief support to Deontay Wilder's heavyweight title fight versus Luis Ortiz at Barclays in Brooklyn (New York), but will now land on an April 21 show at the same venue topped by a 140-pound title eliminator between beleaguered ex-beltholders Adrien Broner and Omar Figueroa.

Both shows will air live on Showtime, whose press office revealed the news on Friday.

“While the injury to Centeno is unfortunate, we’re pleased to have the flexibility to keep the Charlo-Centeno fight on our 2018 boxing schedule,” Stephen Espinoza, president of Showtime Sports said in a press statement. “The March 3 Showtime Championship Boxing event remains a can’t-miss night for any fight fan, with Deontay Wilder facing the most dangerous opponent of his career in Luis Ortiz, and Andre Dirrell and Jose Uzcategui settling the score in a rematch of one of 2017’s best fights.”

Both boxers earned their way to the interim title stage with singular wins in 2017. Centeno (26-2, 14KOs) breathed new life into his career following an upset knockout win over previously unbeaten Immanuwel Aleem last August in Miami, Oklahoma. The Oxnard, Calif.-based contender has scored back-to-back 3rd round knockouts since a stoppage loss to Maciej Sulecki nearly two years ago, but his extended break from the ring will now last nearly two months longer.

“I’m devastated.,” said Centeno. “I’ve been in the gym for a long time. Being so close to a fight and accomplishing my dream of a world title it’s devastating. It happened during sparring. I tried to work through the pain and as the day progressed and the adrenaline subsided I had to go to the ER and get checked out. It’s a good enough injury that it had to be postponed. Nothing was broken, but it was severe enough to keep me from fighting.

“I was just about to peak. Now I have to taper off a bit and cut back to let my body recover and then pick it up and get some momentum back.”

Despite Centeno being the one suffering an injury, the news is perhaps even worse for the rising star he was due to face.

Charlo (26-0, 20KOs) and his twin brother Jermell have expressed years-long frustration over his handlers failing to secure higher profile fights. The older twin—by seven minutes—saw his 2017 campaign limited to just one fight, a 4th round knockout of a gimpy Jorge Heiland last July at Barclays in Brooklyn.

The win was enough to put Charlo in position as the mandatory challenger to unbeaten, unified middleweight titlist Gennady Golovkin. While he was always due to wait out the result of Golovkin's rematch with Saul 'Canelo' Alvarez on May 5, he now has to wait nearly two more months just to keep his position secure after putting together the finishing touches on a motivated training camp.

“I’m ready to go,” said Charlo. “I’m 167 pounds right now, and this was the best camp I’ve ever had. I’m so disappointed. I’m at a loss for words. When you want something so bad and you don’t get it, you can’t be a kid about it. You just have to deal with it.

“I’m hungry and I’m ready to get back in the ring. I’m still coming to the fight though. I’m going be there to support Deontay. I love Barclays Center and all my fans in Brooklyn.”

His fans will have plenty of chance to show him some love—out of the ring next weekend, and in the ring seven weeks later than expected.