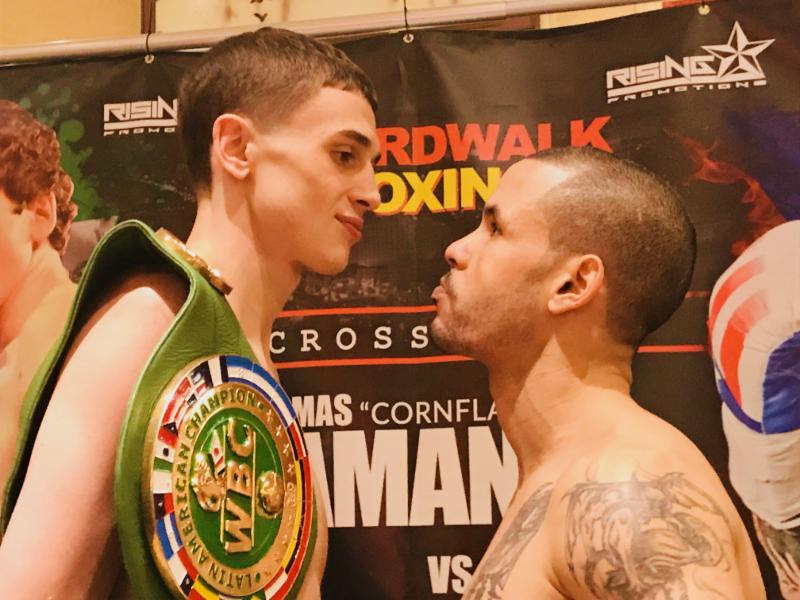 The inaugural edition of "Boardwalk Boxing is set, as all boxers made weight for Saturday's show at Showboat Hotel in Atlantic City, New Jersey.

Topping the bill in an intriguing crossroads bout, local attraction Thomas Lamanna defends his regional welterweight title versus Brooklyn's Gabriel 'Tito' Bracero. Lamanna—whose Rising Star Promotions presents the bill—checked in at 146.3 pounds, while Bracero tipped the scales at a lean and ready 145.3 pounds.

While not on the level of what the late Arturo Gatti was able to bring to the area during his heyday, Lamanna (25-2, 9KOs) has done his best to breathe life into an Atlantic City market that has been dying on its feet for years. The broken casino town has endured a resurrection in recent times, complete with the creation of the Atlantic City Boxing Hall of Fame and local favorites like Lamanna—who hails from nearby Millville—bringing patrons back to the long-storied boxing town.

The 26-year old fringe contender is 17-0 in Atlantic City, including a 10-round shutout of Samuel Amoako last November to extend his current four-bout win streak.

Bracero (24-3, 5KOs) surprisingly fights along the gambling strip for the first time in his career, despite hailing just 2-1/2 hours north in Brooklyn. The majority of his career has been spent in New York, where—in stark contrast to Lamanna's hometown success—he has suffered all three career losses. The 37-year old Nuyorican comes in having dropped two of his last three starts, including a 10-round points loss to Paul Malignaggi in their crosstown rival clash last August.

The bout tops a 12-fight bill which will stream live through the popular and growing Fight Night Live on Facebook series (Saturday, 7:00pm ET, FaceBook.com/FaceFIGHTNIGHTLIVE).