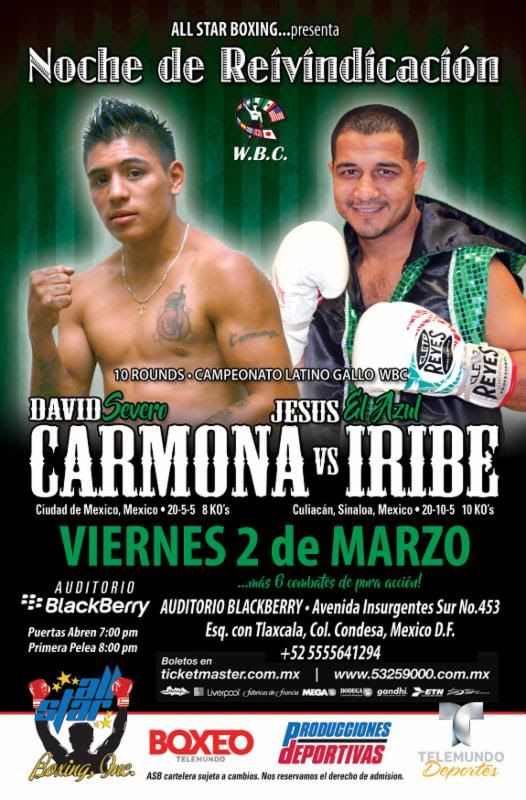 A longtime series favorite, David Carmona will have to rely on far more than moral support this weekend.

The flailing super flyweight contender is in desperate need of a win as he heads into an all-Mexico showdown with Jesus Iribe this Friday at Auditorio Blackberry in Mexico City. The bout marks the first of two consecutive Telemundo telecasts to take place in Mexico, with Carmona no stranger to the venue.

Where he finds himself in uncharted water for the first time is a scenario where another loss could mark his final time as a televised headliner—at least as the A-side.

"We saw what happened last week when a boxer knows he needs to dig deeper than ever before to remain relevant," promoter Felix "Tutico" Zabala Jr. told FightNights.com, referring to last week's thriller in Florida.

Jonathan Gonzalez rode a 3rd round knockdown to the finish line in taking a narrow split decision win over Ricardo Rodriguez in the 2018 spring season debut of Boxeo Telemundo. The win was much-needed for Gonzalez, who two fights ago was knocked out by fringe contender Joebert Alvarez. Despite suffering his third straight loss, Rodriguez—whom Carmona has twice defeated on this very series—was valiant in defeat, performing well enough to earn at least one more night in the spotlight.

Carmona (20-5-5, 8KOs) was previously given the same benefit of the doubt, but three straight losses has his career stuck in a tailspin. He earned respect in extending the ridiculously talented former two-division champ Naoya Inoue the full 12 rounds in their May '16 title fight, as well as pushing another former titlist in Carlos Cuadras to the brink in coming up just short last March.

However, it was a shocking points loss to fellow retread Daniel Lozano last October that had boxing experts curious as to how much he has left, even on the televised club circuit.

Friday night should tell the tale.

"There's a reason we are calling this show Noche de Revindicacíon," notes Zabala Jr., the title translating to 'Night of Reclamation' as a motivating factor for Carmona to get his groove back. "He has a tough opponent in front of him; Iribe has only been stopped by world champions Archie Solis and Raul Garcia. He took the great Brian Viloria the full 12 rounds in their world championship fight and also comes in on a four-fight unbeaten streak."

The last time Carmona enjoyed an unbeaten streak of any kind, it led to a title shot versus Inoue. That came in his own repeat win over Rodriguez way back in Oct. '15, which has to seem like a lifetime ago.

Even at just 26 years of age, there's still no time like the present for the Mexico City product.

"With this series and these fighters, one win and you're right back in the swing of things—and likely facing another Telemundo winner down the road," notes Zabala, although not at all committing to any suggestion of matchmaking. "First thing's first; David has to take care of his business on Friday, while Iribe wants to keep the good fortunes rolling and pursue another title fight of his own.

"If you ask me, it all adds up to one heck of a main event."