Sparrow Soars In Philly With Two-Round Destruction of Serrano 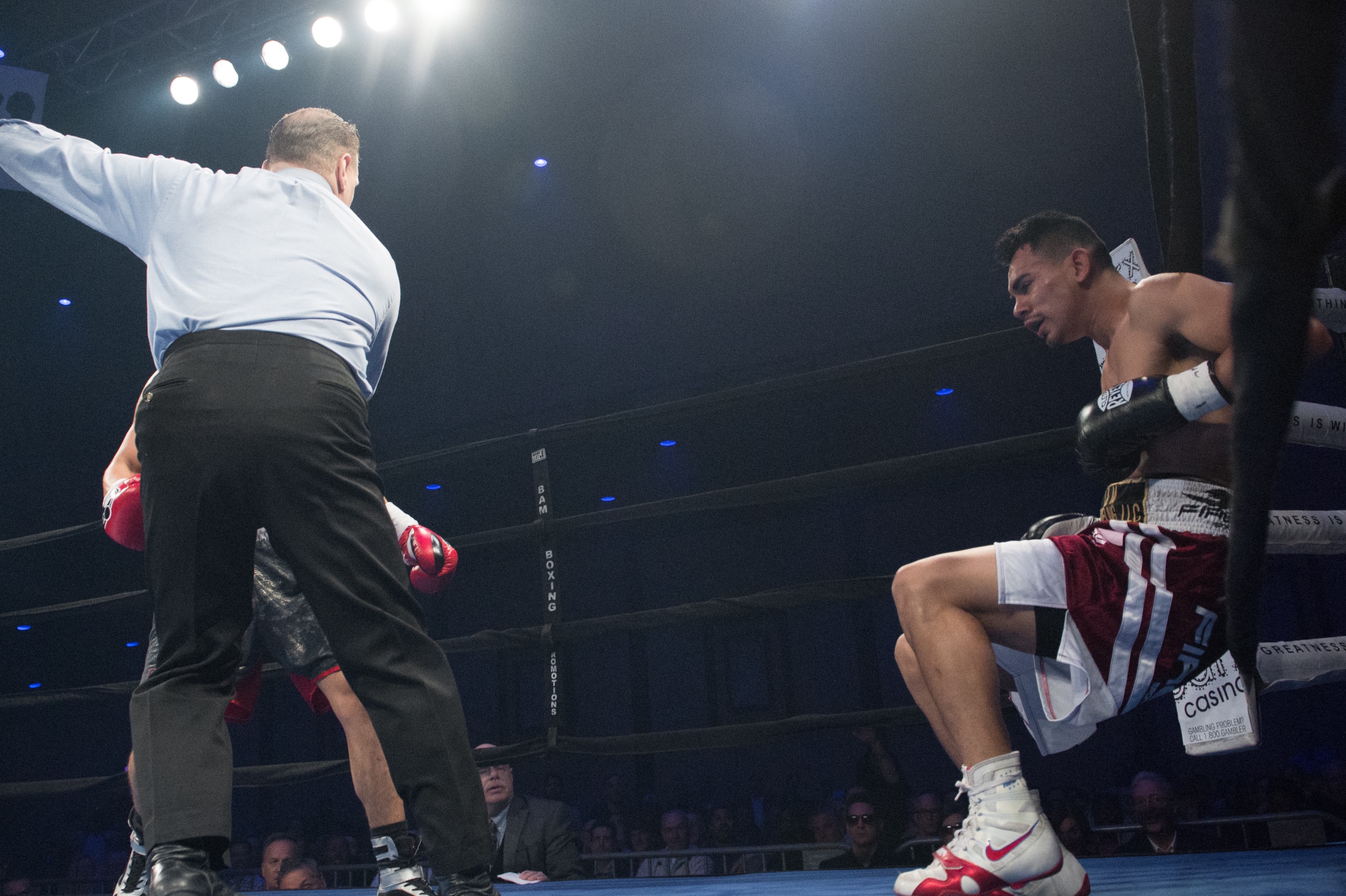 Barely a month after the Eagles landed a Super Bowl championship, Avery Sparrow once again soared in Philadelphia.

The rising Philly super featherweight has officially begun the transition from prospect to budding contender following a two-round destruction of Jesus Serrano in their headliner Friday evening at Parx Casino's Xcite Center in nearby Bensalem, Pennsylvania.

Sparrow delivered a performance worthy of topping the inaugural installment of Xcite Fight Night series, the show serving as the first of many more to come at the state-of-the-art casino in the outskirts of North Philly. Tasked with the challenge of a no-nonsense slugger from Nogales, Mexico, the 24-year old with all of just 10 fights entering the night proved he was every bit as evidenced in his previous ring appearance when he gutted out a 10-round decision versus promising Puerto Rican super featherweight prospect Jose "Wonder Boy" Lopez last November.

A lesser fighter would've asked for a layup his next time out. Then again, a lesser fighter wouldn't survive in the boxing world as seen by Hall of Fame promoter/matchmaker J Russell Peltz and the entire staff at Joe Hand Promotions, who presented Friday's event. Sparrow proved his mettle in bouncing back from his lone defeat—a disqualification loss to Jerome Rodriguez in Oct. '15—with five straight wins against mostly credible opposition entering the evening.

Pre-fight banter suggested that Sparrow—while largely focused on the task at hand—wasn't at all concerned about what Serrano had to offer. He proved that in his brief but thrilling performance, dominating the visiting challenger in the opening round before showing off his finishing skills in round two. Sparrow poured on a power punching attack in wearing down the normally durable Serrano before scoring the first of two knockdowns in the round courtesy of a left hook.

The sequence officially marked the beginning of the end.

Serrano (17-6-2, 4KOs) was able to beat the count, but had no answers for any of the incoming as Sparrow refused to back off his wounded prey. A flurry of head shots sent his foe reeling backwards before a right hand shot sent him to the canvas for the second time on the night.

Once again, Serrano made it to his feet. Once again, Sparrow went right back on the attack. A final sequence of power shots had Serrano out on his feet, a weary state recognized by referee Gary Rosato who stepped in to halt the contest.

The official time was 2:17 of round two.

Sparrow advances to 10-1 (4KOs) with the win, now his sixth straight. Furthermore, it will only improve on his current standing as a world-ranked contender as he cracked the WBO Top 15 in the 130-pound division following his win over then-#5 ranked Lopez late last year. Friday's performance only adds to what he has been telling the boxing world for as long as anyone would listen—that his time has arrived as a rising contender to watch.

In the co-feature, Ireland's John Joe Nevin passed his toughest test to date with flying colors in an eight-round nod over Alex Torres Rynn in a battle of unbeaten lightweights.

Scores were 80-72 (twice) and 79-73 in favor of Nevin, who earned a Silver medal for Ireland during the 2012 London Olympics but whose pro career arc has been largely underwhelming to date. In making his way to this show, the non-negotiable condition was that his foe would be a massive upgrade from the collection of upside-down opposition on which his soft résumé has been padded.

With that came Torres Rynn, an unbeaten Mexican now based in Canada who did his best to force the longtime amateur standout out of his comfort zone. Nevin proved his mettle, taking the best his aggressive opponent had to offer while putting his superior boxing skills to use. His own healthy mix of lateral movement and occasional power punching led to the wide points win and by far his most substantive achievement through his first four years in the pro ranks.

In undercard action loaded with upsets:

- Tyrone Luckey provided a pleasant surprise for those in attendance who stuck around for the evening's walkout bout with a stunning 1st round knockout of Jermone Conquest. Luckey (9-8-2, 7KOs)—a 32-year old from Neptune, New Jersey whose recent run has been anything but lucky in riding a five-fight winless streak entering the night—twice dropped Philly's Conquest in the opening round before forcing a stoppage at the 2:43 mark.

- For the second time in just 15 months, local super welterweight Isaiah Wise failed to overcome the stubborn surges of an aggressive opponent in dropping a six-round split decision to New Jersey's Anthony Prescott. A 2nd round knockdown proved to be the difference between a draw and a second career loss for Wise, who rose from the canvas to offer a strong middle-rounds stretch only to ultimately come up short. A score of 57-56 in favor of Wise (6-2,3KOs) was overruled by tallies of 57-56 and a far too wide 59-54 in favor of Prescott (9-8-2, 2KOs).

- Vinnie DeNierio (3-4, 1 KO) was able to bring positive news home to his economy-ruined hometown of Elmira, New York with an upset split decision win over Coatesville's Gerardo Martinez. The tightly contested four-round affair saw Martinez (2-1, 1KO) land a 39-37 nod on one card, overruled by matching scores of 39-37 for DeNierio who ends a two-fight skid.

-The opening bout of the show also had the honor of serving as the first ever pro fight at Parx Casino, as Nahir Albright scored a four-round nod over Sidney Maccow (3-8, 2KOs) in a super lightweight battle. A pair of knockdowns in the opening round paved the way for a wide win over Albright (3-1 1KO), who prevailed by scores of 40-34 (twice) and 39-35.