Brian Castaño Dominant In 12-Round Stoppage Of Cedric Vitu 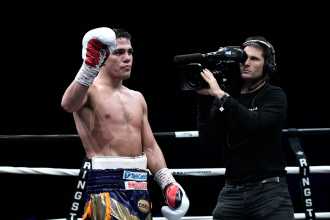 It's easy to forget Brian Carlos Castaño's name when discussing the best 154-pound boxers in the world, given the amount of publicity afforded to the rest of the division's top players.

His only hope is that with each performance comes an emphatic reminder that he's very much in the discussion among the best super welterweights in the world.

The latest case presented by the unbeaten Argentine boxer came in the form of his first title defense, beating the fight out of veteran contender Cedric Vitu in a dominant 12th round stoppage victory Saturday evening in the Paris suburb of Boulogne-Billancourt, France.

Castaño won virtually every round before a final barrage of punches forced referee Gustavo Padilla to halt the one-sided contest with barely 30 seconds to go in the bout.

Those 30 seconds perhaps saved Vitu from career-ending damage, as the visiting Castaño was that overwhelming of the course of their 12-round title tilt. The night marked the first title defense for Castaño, who won his portion of the 154-pound crown in a 12-round nod over Michel Soro last October in the France bordertown of Evian les Bains which sits just inside Switzerland.

Eight months later and 600 kilometers northwest came a far easier night at the office, as the unbeaten 28-year old put on a clinic versus a veteran contender who was surprisingly challenging for his first major title in his 49-fight career. The vast disparity in talent was evident from the opening bell, as Vitu couldn't keep up with Castaño's combination punching. The tactic produces a wide lead, racking up points in each passing round while Vitu fought as if he literally didn't know what hit him.

The closest that the Frenchman ever came to winning a round was in the sixth frame, as Castaño ever so slightly took his foot off the gas. Vitu (46-3, 19KOs) did his best to get the attention of the visiting titlist, but even his most effective right hand shots did little more than rattle the cage. By rounds end, it was evident that it would be just a matter of time before matters came to an end.

it's a testament to Vitu's fighting will that he lasted as long as he did, absorbing a world of punishment while offering few answers in return as his 11-fight win streak was sure to come to an end. Castaño was steady on the attack in every round over the back half of the night before putting away his challenger for good. Some 18 unanswered punches had Vitu in surrender mode, recognized by referee Gustavo Padilla who jumped in to halt the vicious onslaught.

Castaño improves—in every sense of the word—to 15-0 (11KOs) with the win, his second straight on the road and in France. As he and his brother Alan have both previously fought under the Premier Boxing Champions (PBC) banner—which lays claim to 154-pound titlists Erislandy Lara, Jarret "Swift" Hurd and Jermell Charlo—unification bouts with any of the aforementioned shouldn't be that hard to negotiate at some point in 2018.

Lara and Hurd are already slated to lock horns in an April 7 unification bout in Las Vegas, with Showtime to televise. The network has regularly showcases both boxers as well as Charlo, who is slated for his next premium cable appearance in June versus a yet-to-be-named challenger.

Perhaps Castaño can throw his name into the mix, given the minimal punishment absorbed on Saturday and an eagerness to prove he belongs with the sport's elite.

The bout topped a seven-fight show presented by Ringstar-France's promotional outfit, with Ringstar's website providing the live and legal stream for those outside of France's Canal+ TV market.