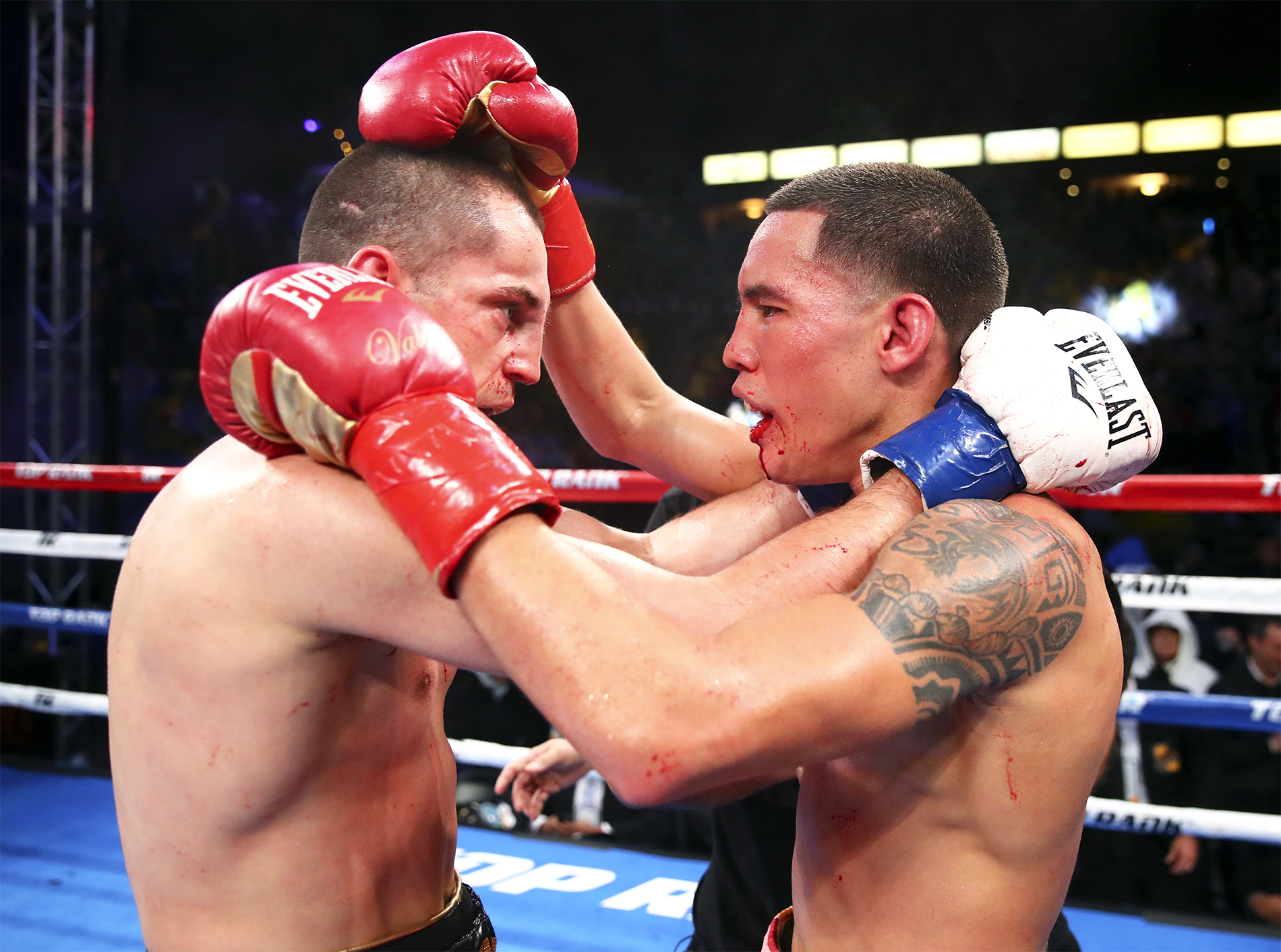 It was a night where everything that could go wrong did just that. In the end, however, Oscar Valdez took a machete to a swarm of adversity in outlasting Scott Quigg for a well-earned unanimous decision victory Saturday evening in front of a rain-soaked crowd at StubHub Center in Carson, California.

Scores of 117-111 (twice) and 118-110 didn't quite tell the tale of the Fight of the Year-level slugfest that took place in a venue famous for producing instant classics live on ESPN.

This one had all the signs of never happening at all—from the soggy forecast, to former 122-pound titlist Scott Quigg missing weight by nearly three pounds and then refusing to cooperate in negotiations dedicated to salvaging the scrap to Valdez' own camp advising the unbeaten featherweight titlist to not go through with the bout at all.

Ever the warrior, Valdez—making the fourth defense of his 126-pound strap—decided that the show must go on and that his heavy opponent must be punished in the ring for the disrespecting the sport. Five rounds into the night, it stood to reason that perhaps he should've listened to those who suggested he fight another day.

That was the point in the night in which—according to trainer Manuel Robles—the two-time Mexico Olympic boxer suffered a broken jaw that required his being rushed to a local hospital immediately after the final decision was announced. It was hardly the point at which he ceased fighting, even if Valdez was forced to slow down in fighting through the pain in addition to a physical size disadvantage as Quigg was closer to the welterweight limit than featherweight by fight night.

"I have always said that I want to fight the best, and tonight I beat a great fighter in a hell of a war," Valdez stated after the fight.

Quigg rightfully took his share of lumps long before the opening bell given his weigh-in follies. However, pre-fight whispers suggested that the 29-year old Brit suffered a stress fracture in his right foot roughly a month ago, which his team used as an after-the-fact alibi in his struggles to make weight.

Things didn't get any easier for the former super bantamweight titlist, who—in addition to having to cough up more than 20% of his suggested $100,000 purse (as listed in the contracts submitted to the California State Athletic Commission) for missing weight—was forced to fight through a broken nose and several facial cuts. The foot injury also limited his mobility, although Valdez' lust for standing and trading in lieu of putting his superior skillset to use made it much easier to be found and tagged.

Both boxers suffered severe wounds over the course of their blood-soaked brawl. Despite the intensity, there was never a point in the contest where Valdez was behind on the cards, jumping out to an early lead in taking advantage of Quigg's struggles to get untracked. Sensing his opponent was likely sluggish in carrying extra weight, the unbeaten 27-year old targeted the body in hopes of slowing his opponent to crawl.

It didn't quite work out that way, but was enough to pile up points on the scorecards even if they were a bit too wide in the end. Although it could be argued that he didn't deserve to be in the ring at all given what took place at the weigh-in, the show did in fact go on for Quigg who was able to slug his way back into the bout. Not all of his in-ring tactics were clean, however, as he was warned for wrestling Valdez to the canvas in round six and for a vicious low blow during the championship rounds.

One final brave stand in the 12th round wasn't enough to turn the tide, but perhaps just enough to earn back some of the respect he lost prior to the night. It wasn't reflected on the final cards, but instead through the cheers of the crowd and reaction on social media from those watching at home.

"I thought [the fight] might have been a round or two closer," Quigg (34-2-2, 25KOs) told the media after the contest. "That's what I expected on the cards, but he won the fight. The close rounds, they sided with him."

What isn't on Valdez' side is any sort of luck. It was ultimately his call to go through with the fight, and in the end wound up with his third straight rough night at the office. He engaged in a grueling 12-round affair with Miguel Marriaga in this very venue last April, which was followed by an all-out war with previously unbeaten challenger Genesis Servania in their ESPN-headliner which also went the distance last September in Tuscon, Arizona.

The pain and wounds from Saturday's battle are the type that ultimately cut careers short, especially for action fighters like Valdez (25-0, 19KOs). Time will show whether he is able to maintain the same form that led to his becoming a featherweight titlist following a brilliant amateur career.

If nothing else, he emphatically proved a flair for getting it right despite everything else going wrong.