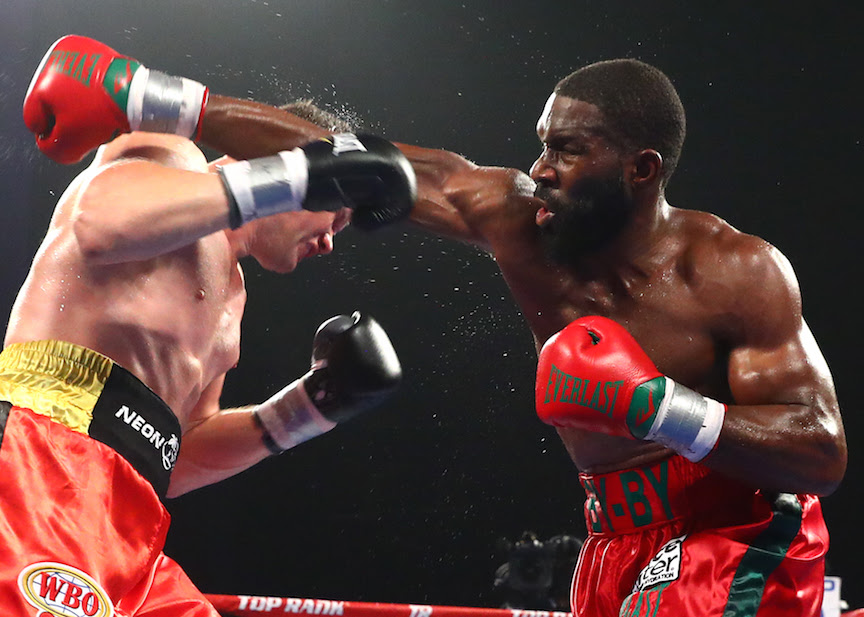 A rabid setting in a state-of-the-art venue hosting its first boxing event in a once-vibrant fight city looking to make a comeback. Two heavyweights trading punches and knockdowns, with the (relative) local favorite overcome early drama to close the show. The ESPN team on hand to capture all of the drama live for its home viewers.

What more could you want in a boxing event?

For those Bryant 'By-By' Jennings, a performance more in line with the advertised showcase would've caused far less panic. Instead, the heavyweight hopeful from Philadelphia went for the adrenaline rush, recovering from a 4th round knockdown to score three of his own to halt Alexander Dimitrenko in rounds Saturday evening at Ocean Resort Casino in Atlantic City, New Jersey.

An enthusiastic crowd of 2,543 was on hand for the maiden boxing card at the picturesque locale, given its money's worth and then some as Jennings made the night far more interesting than perhaps needed to be the case.

It was an uneven performance from the late bloomer, who entered the pro ranks following a limited amateur career. At 33 years of age finds, he still himself forced to simultaneously learn on the go while pleading his case as a boxer who belongs in the discussion of today's best heavyweights.

Saturday's performance was indicative of such a scouting report, as Jennings—who was bet all the way up to as high as a 25-1 favorite going in—failed to capitalize in the early going on Dimitrenko's dumpy physique and lazy in-ring habits. Urged by his corner to work behind the jab and slowly break down his 6'7" foe, the Philly-bred boxer decided to instead do what he felt was best in the ring.

It nearly proved a destructive mindset in round four, when the crowd and the staff at Top Rank was forced to take a collective gasp following a shocking knockdown. It came in the form of a sudden overhand right from Dimitrenko, who leveraged every bit of his four-inch height advantage to catch his foe off guard in sending him to the canvas.

Where he sometimes falls short in overall ring IQ, Jennings has always compensated in fighting heart. Even in back-to-back losses to Wladimir Klitschko and Luis Ortiz, the one-time high-ranking heavyweight contender never stopped putting his best foot forward. It's precisely what he did from the moment referee Alan Huggins allowed him to continue following his mandatory eight count.

From there, the comeback was on although you wouldn't know it from the calm demeanor of the house favorite.

"I was prepared for a tough 12 rounds," Jennings said, a statement most boxers make before and after a fight more often as a token response than having to actually prove true.

On this particular night, Jennings had to put something behind those words—turning the tide even before the close of round four.

It was a golden opportunity missed by Dimitrenko, who has historically fallen miserably short every time he's stepped up in class. By round five, the Russian-bred, Germany-based boxer had already defaulted to old habits, allowing Jennings to work his way inside and getting lazy even in the moments where he threatened to regain control.

Jennings picked up on these flaws and kicked it into high gear in round eight. It was a frame that saw the last momentum shift in the contest, with the worst part over for the local favorite as he gave his adoring fans plenty of reason for cheer in dropping Dimitrenko hard courtesy of a trademark Philly left hook. Dimitrenko recovered from the blow, but was back on the canvas barely 30 seconds later.

Despite making it out of the round, it was never any safer for Dimitrenko. Jennings sought closure in round nine, drilling his visiting foe with a right uppercut to produce his third knockdown of the night.

While he picked up a fifth straight win, Jennings was ultimately denied a true knockout finish and Dimitrenko the opportunity to recover and continue. The referee was far too eager to call it a night, waving off the contest even before Dimitrenko hit the canvas and despite a fervent in-ring protest.

"I wanted to continue the fight. I don't know why the referee stopped it," claimed a dejected Dimitrenko, who falls to 41-4 (26KOs) in snapping a three-fight win streak following a knockout loss to then-unbeaten contender Joseph Parker in Oct. '16.

For Jennings, it's now five in a row since returning to the ring exactly 52 weeks ago following a 20-month forced ring hiatus while sorting out a promotional dispute. Having since aligned himself with Top Rank, Jennings (24-2, 14KOs) is eager to return to the level of success and praise he enjoyed in landing a title shot versus then-lineal king Wladimir Klitschko in April '15 and even in remaining competitive throughout an eventual 7th round knockout loss to Luis Ortiz in Dec. '15.

Where he goes next, however, remains uncertain.

Most of the top heavyweights busy throughout the rest of the year. Unified titlist Anthony Joshua is slated to defend versus mandatory challenger Alexander Povetkin in September, while unbeaten titlist Deontay Wilder is set to face former lineal champ Tyson Fury later in the fall following the Brit's own win over Francesco Pianeta earlier in the day in Northern Ireland.

It's perhaps for the best, as Top Rank didn't sign the Philly product with the intention of cashing him out at first chance, nor is the 33-year old ready to return to the title stage—whether or not it's an assessment he'd like to hear.

In the meantime, he he can take comfort in knowing his latest win came in overcoming adversity and that the can continue to learn on the job while moving towards his still yearning quest in ruling the heavyweight roost.

"I made adjustments, and I got the job done," noted Jennings, which can remain a blueprint for his fighting future.