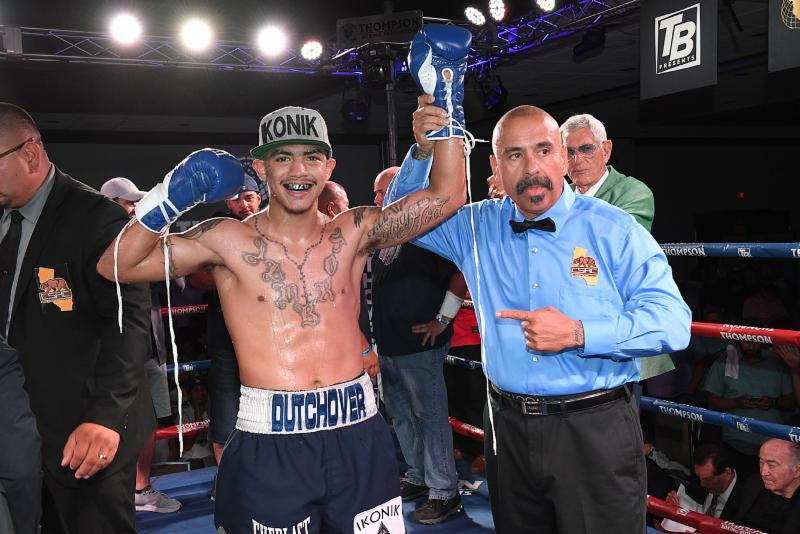 Michael Dutchover is still a few months shy of his 21st birthday, but continues to prove wise beyond his years.

The Texas-bred, California-based prospect has offered his in-ring services to promotional stablemate and reigning 122-pound titlist Danny Roman as both prepare for their next respective bouts. Roman is due to make the second defense of his title versus England's Gavin McDonnell on a DAZN USA-streamed show October 6 in Chicago, while Dutchover will top a prospect-heavy card on September 21 at Doubletree Hotel in Ontario, California.

Dutchover (10-0, 7KOs) will square off against Mexico's Luis Alberto Lopez (12-1, 5KOs), who makes his US debut for the bout. His first time fighting on this side of the border is in stark contrast to that of his opponent, who has fought all but two of his pro bouts at Doubletree Hotel.

While he remains a familiar face to the local crowd, the 20-year old boxer believes his faithful followers will see a new and improved version thanks to the high level at which this past training camp has been conducted.

"You have to be patient against guys like Danny Roman," said Dutchover, who is co-promoted by Banner Promotions and Thompson Boxing. "He is too skilled for you to walk in there and think you are going to lay gloves on him. That's been my biggest growth area. Just learning how to settle into a patient rhythm and capitalize on angels once I see them."

As much as he's learned in the past few weeks, working with championship-level talent is hardly a new experience for the unbeaten super featherweight. In fact, it's what motivated him to call California his permanent home.

"I first came out to Santa Fe Springs the summer before my senior year of high school," reveals Dutchover, who is coming off a brilliant 2nd round knockout of Sergio Ramirez this past June. "That's when I met my current trainer Danny Zamora. He put me in with (former lightweight titlist) Darleys Perez.

"After that experience, I knew once I turned professional that I would want to live and train in this area."

It's been largely home-cooking ever since, with his next ring appearance marking his 9th appearance at Doubletree Casino. All but two of his pro bouts to date have come at home, but he knows to rely far more on skill than location to prevail.

Still, the sessions he's getting in at the gym leaves the feeling that he can handle anything that his next—or any other—opponent can throw at him on fight night.

"He has a good record on paper, but I know he hasn't fought the level of talent that I have," remarked Dutchover of Lopez, who came up just short in a 10-round thriller with Abraham Montoya in his most recent bout this past March in Mexicali. "I'm heading into the fight with a lot of confidence."