Munguia to defend 154-pound title vs. Allotey on Sept. 14 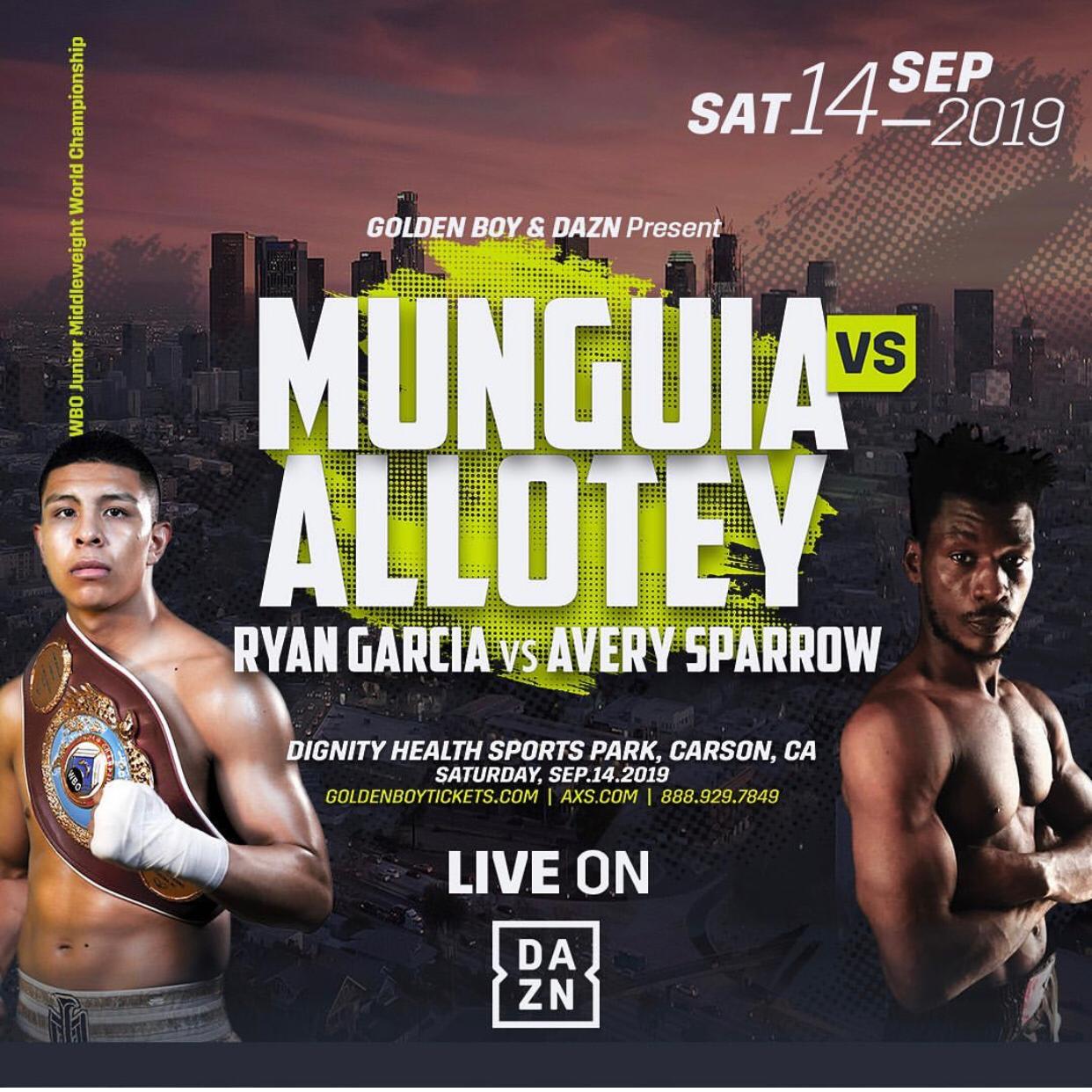 With middleweight world champion and Mexican star Canelo Alvarez electing not to fight in September, Jaime Munguia has landed the coveted slot to fight on Mexican Independence Day weekend.

Munguia will defend his 154-pound title for the fifth time when he faces Patrick Allotey on Sept. 14 (DAZN) at Dignity Health Sports Park in Carson, California, Golden Boy Promotions announced on Saturday.

The card will also see the return of lightweight Ryan Garcia, the 2017 FightNights Prospect of the Year, who will face Avery Sparrow in the 10-round chief support bout.

"We're excited to be able to continue this tradition that we know many fans anticipate," Golden Boy Promotions CEO Oscar De La Hoya said. "Jaime Munguia is an undefeated world champion who has become one of Mexico's biggest boxing stars. Meanwhile, Patrick Allotey has an impressive skill set with years of experience under his belt. The styles are guaranteed to make a war."

Munguia (33-0, 26 KO's), 22, scorched Sadam Ali in a fourth-round knockout in May 2018 to win the title and has made four defenses. His most recent one, however, did not come without controversy. In what was initially expected to be his last fight at 154 pounds, Munguia was awarded a majority decision against Dennis Hogan on April 13 in Monterrey, Mexico.

"I feel very happy for the opportunity of headlining a card on Sept. 14," Munguia said. "That's the best date for boxing in the entire year. It's a great date for Mexico because that's when we celebrate Mexican Independence Day. I'm proud and honored to be representing Mexico in the festivals for my country. I'll give my best, and I'll try to deliver a great fight for all the people and for those who will see us."

Golden Boy and DAZN were hoping for a fight between Munguia and former two-division world titlist Jessie Vargas (29-2-2, 11 KOs), 30, of Las Vegas, who moved up to junior middleweight in April and knocked out Humberto Soto in the sixth round. However, both sides could not agree on the weight. Vargas wanted to fight for the title, but Munguia requested to face him in a non-title catch-weight bout at 156 pounds.

"I was hoping to fight for the title in September, but that will be postponed for the moment," Vargas tweeted.

"I respect Munguia. He is a great fighter," Allotey said. "But I'm an African warrior, so you know I'll be coming to cause a big surprise."