Jake Paul and Anderson Silva respectful ahead of Oct. 29 clash 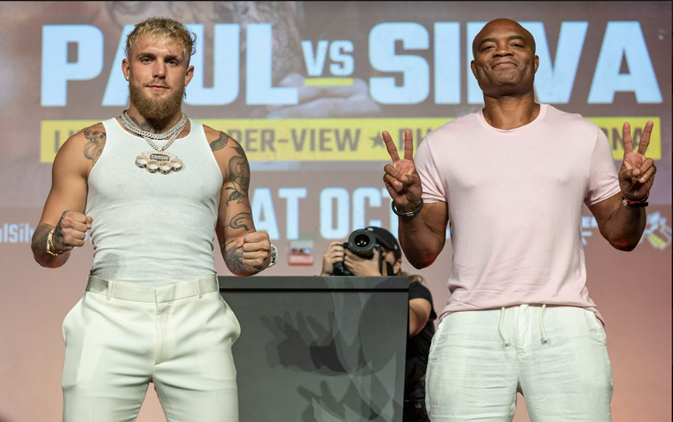 Los Angeles – September 12, 2022 – In a press conference that broke new ground for the amount of respect and appreciation on display, Jake “The Problem Child” Paul and Anderson “The Spider” Silva showed that fighters don’t have to exchange insults to spread the word on a matchup that promises to deliver fireworks. The two sat for Monday’s kickoff press conference to hype their mega fight on Saturday, October 29 at Gila River Arena in Phoenix, Ariz. live on SHOWTIME PPV contracted for eight rounds at a catchweight of 187 pounds. Paul and Silva even posed for photos together with Paul’s brother Logan to recreate a snapshot the trio took 13 years ago.

Tickets will go on sale Wednesday, September 14 at 1 p.m. ET and can be purchased at ticketmaster.com, The press conference was hosted by former BELLATOR MMA and UFC world title contender and Silva rival Chael Sonnen and streamed live on the SHOWTIME SPORTS YouTube event page HERE and on Paul’s YouTube event page HERE.

A press tour that started Monday in Los Angeles at the NeueHouse Hollywood will continue Tuesday at the Gila River Arena in Glendale, Ariz., with both Paul and Silva taking center stage once again.

Paul has made no secret of his admiration for Silva, an MMA legend who holds the UFC record for the longest title reign in the organization’s history (nearly seven years) and the most consecutive UFC victories (16) and has now successfully transitioned to boxing. Silva announced his return as a world-class boxer in June 2021 when he soundly defeated former middleweight boxing champion Julio Cesar Chavez Jr., via split decision that wasn’t as close as the scores indicated.

Silva has also voiced his appreciation for Paul and what he’s been able to accomplish in boxing in such a short time. The Sports Illustrated 2021 Breakout Boxer of the Year, Paul last fought December 2021 when he recorded one of the year’s most spectacular knockouts – a one -punch KO of former UFC champion Tyron Woodley in front of a sold-out crowd on SHOWTIME PPV.

Despite the mutual admiration, Paul predicted the bout won’t go past five rounds and pledged to get a spider tattoo if Silva wins on October 29.

Here’s a sampling of what the participants had to say at Monday’s press conference:

“I signed up for the hardest sport in the world and I love it. That’s what I'm built for, and I love a challenge. I grew up idolizing (Silva). For me this is even surreal that I'm even sitting here, I need to take a moment to be like, ‘Is this real with all the cameras?’ I was sitting on a couch watching this guy as a kid and here we are.

“Anderson Silva is the nicest person, and we love him. If my opponent is a di**head, I'm going to treat him like a di**head and beat his ass. But I respect this man, I'm still going to knock him out, but respectfully knock him out.

“I'm built for this, sparring world champions in the gym getting ready for Anderson. Obviously he’s a southpaw, my first time going up against a southpaw. But I love this, man. I truly feel I was put on earth and destined to box, and this will be my biggest stage yet and biggest test yet. But I'm a young man and I'm excited to get this experience under my belt because the fights are just going to keep on getting bigger. This is just the start.

“Only been preparing as a pro really for three years, I made my pro debut less than three years ago. But time management is crucial. We have the best coaches, the best nutrition, and we just work hard man, that's been the key to my success and the key to my brother’s success is just nonstop work every single day, showing up and being present you know? And to be honest man I’m addicted to this, so no matter how hard I have to work (I do it).

“This is it. This is a make-or-break moment. I know I have someone who just beat a world champion of boxing right in front of me.

“Played them like a fiddle (the MMA community). Got them watching. In my pocket.

“If you beat me, I'll get a spider tattoo.

“I have an opponent who is a real professional who will make weight and I won't have to worry about doing a whole training camp.

“On the inside he gets a little shifty. We have sparring partners who will imitate him. He is the first southpaw I’m facing.”

“First of all, guys, everyone needs to respect this guy. Why? Because it opens the door for everyone to think about something new and I'm so excited and so happy to be here. How many years ago did you come to take a picture with your brother? I fought a lot in my entire life and I'm here again with the new generation. That's the proof that everyone can do anything in their life if you believe in yourself and you have the passion and love.

“The energy involved in this fight is so amazing. A lot of people think about, ‘Anderson you’re crazy, why do you do that?’ You know what, that's a good challenge for me because Gabriel and Elias and my son Kalyl beat me every day in the boxing training and I say, ‘I can do that, I think I can do that you know?’

“Boxing in my life is very special because I grew up watching a lot of boxing and training with Brazilian coaches. I come to this sport to show my respect to the sport and the professional fighters. I'm happy to be here to continue my job at 47.

“First of all, my motivation is that I love it. I love combat sports. Second of all, I have five kids. I love challenges my entire life. Every single time people ask me why I do this, I say I’m doing something I love.

“I train every day. I won't stop training. I keep working because that's my life. I will pass this to the new generation, do your best.

“You don’t need to get a spider tattoo. I know you’re my fan. I’m your fan too. Big fan. I hate tattoos bro. I don’t have tattoos.

“It's the same energy, a fight is a fight. I'm training and doing my best.”