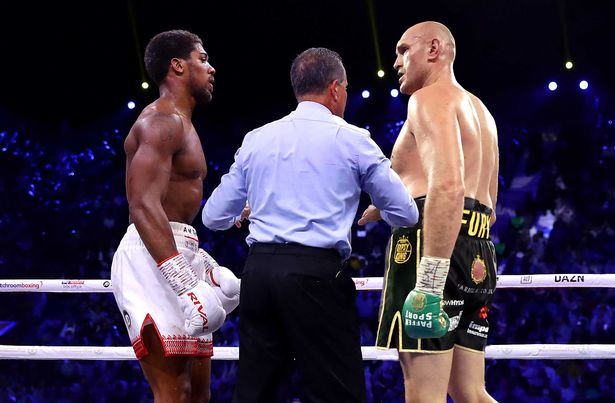 The idea of heavyweight champion Tyson Fury and former two-time unified titleholder Anthony Joshua got a little warmer on Tuesday.

Joshua and promoter Matchroom Boxing have agreed to terms to challenge WBC world heavyweight champion Tyson Fury on Dec. 3, with the fight expected to take place at the Principality Stadium in Cardiff, Wales, which can hold approximately 80,000 fans.

Joshua's management company 258 said in a post on Twitter: “Joshua-Fury update: 258 and Matchroom Boxing can confirm, on behalf of Anthony Joshua, that we accepted all terms presented to us by Fury’s team for a fight Dec 3rd last Friday,” 258 wrote in a Twitter post on Tuesday.

"Due to the Queen's passing, it was agreed to halt all communication. We are awaiting a response."

Fury co-promoter Frank Warren responded to the tweet: “Contract will be with you very soon.”

As of the date of publication, both teams have not addressed the possibility of bringing the mega fight to another international location.

Albeit Fury and Joshua have agreed on the date, there remains some details to iron out, in particular, how the fight would be broadcast. Fury is aligned with BT Sport in the United Kingdom and ESPN in the United States while Joshua is under contract with DAZN in both countries.

Fury (32-0-1, 23 KOs) has flirted with retirement since his sixth-round TKO of Dillian Whyte on April 23 in London. However, he recently insisted that "The Gypsy King is here to stay forever!" He preferred to fight three-belt titleholder Oleksandr Usyk for the undisputed title, but the Ukrainian stated that he does not intend on fighting for the remainder of the year to nurse a slew of injuries.

Albeit Joshua is coming off consecutive defeats, Fury-Joshua remains one of the biggest fights to be made in boxing.