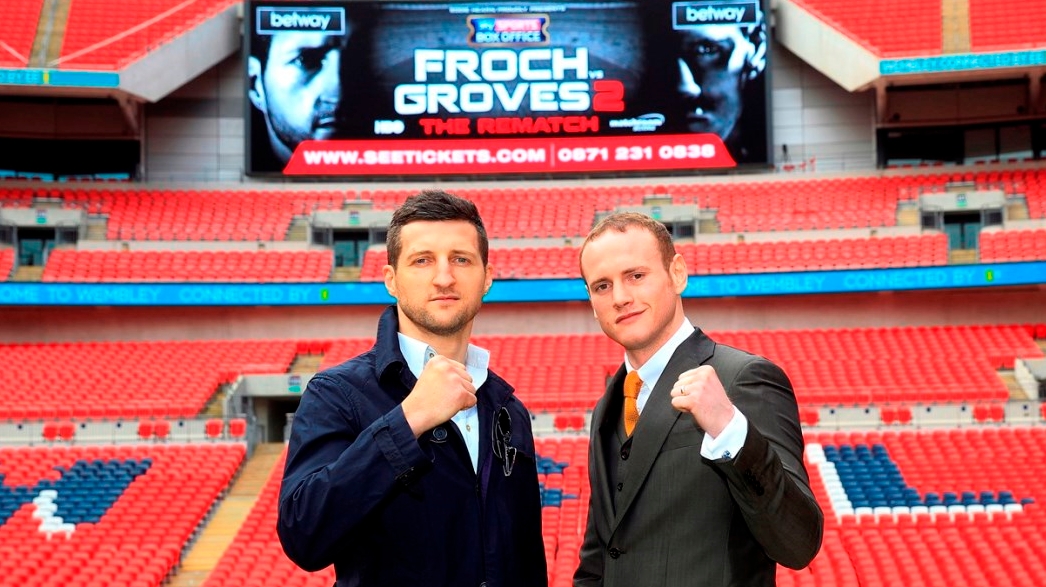 I can’t remember the last time that a boxing event held 80,000 fans. My memory doesn’t serve me as well as it used too. Maybe it’s a good thing. This Saturday night, or afternoon if you are in the United States, Carl Froch and George Groves will meet for the second time at the legendary  Wembley Stadium in the United Kingdom. And yes, it’s being reported that 80,000 fans will be in attendance. Not to shabby for a sport that has been proclaimed “dead” by many. That’s more than Mayweather has done in the United States, and more than the Klitchsko’s have done in Russia. The crowd will be electric, the fighter’s will be nervous, and millions of people will be watching as Froch and Groves take center stage to decide who the king of the UK is in boxing.

A boxing match is always better when the two fighter’s don’t like each other. I’ll call you a liar if you say otherwise. The anticipation is towering, the press conferences are more confrontational, and the attacks from both sides are nothing less than a prime Mike Tyson rant. (Ok, maybe I’m exaggerating.) My point is, nothing is better than waiting and watching two fighter’s who hate each other getting ready to get into the ring with the sole purpose of knocking their opponent out. Froch and Groves do not like each other. Chances are they won’t even shake hands after the fight. It’s not a pre-fight hate, nor a hate that ends when the fight is over. It’s not something to “sell” the fight to the public. It’s a legit passion that they both have in their hearts that detests each other. They would literally fight in the streets if given the opportunity.

That hate was known before the first fight, and with the controversial way their first meeting ended, the hate only grew. Groves was beating Froch soundly, and had even dropped him in the first round of the fight. Froch was coming back, looking like he was going to stop Groves. He did end up stopping him but not the way that he should have. I remember jumping up from my seat on the couch and screaming “NO! NO F****ING WAY! HE DID NOT JUST STOP THAT!” Yes, those were my exact words. I remember that clearly. If I had to guess I’d say that was what %90 of the fans watching that fight were thinking or saying to themselves as well. Maybe Groves was on his way to going down. Maybe he would have weathered the storm. We’ll never know.

What we do know is that Saturday, hopefully some questions will be answered. It’s time for my breakdown and prediction of how I think this fight is going to play out. On Twitter, you’ll see that I have followers keeping track of my predictions for the year. I’m 28-6-1, and riding a thirteen fight win streak. So, let’s see if I can keep it going.

I always like to take what I saw in the first fight and apply it to a second fight. It’s a very good blueprint to follow, however sometimes thing’s change. Every element of the fight needs to be broken down to try to determine who has the upper hand. Groves appeared to be outboxing Froch in the first part of the fight. His hands were faster, and the right hand was landing good when he threw it and doubled it up. He nailed Froch with it to drop him at the end of the first. It wasn’t a flash KO, or something that just caught him off guard. Froch was hurt and he is going to have to look out for that right hand again. I expect Groves to come out boxing again right from the start. He will try to land that right hand by using the jab to set it up. Froch will know this and he’ll try to either counter it or avoid it.  Both fighter’s will be cautious but I think Groves will be able to outbox Froch for the opening rounds.

Here’s where it gets tricky. Both guys know the other guy can hurt him now. There will be big exchanges but both guys will be more cautious. Groves sometimes got the better of those exchanges and sometimes he didn’t. It seemed like his punchers were landing cleaner and he was hurting Froch more at first. Froch was able to take his best shots and come after him in the middle of the fight ultimately changing the pace of it to favor him. He hurt Groves, and you could see that he was fading from exhaustion as the fight continued. The fight was stopped prematurely but Groves was hurt.

So this is one of those fights that has you thinking. Can Groves outbox Froch for twelve rounds? Will Froch put the pressure on again knowing that Groves can hurt him? Does Groves fade down the stretch if Froch gets him into some early slugfest battles?

This is hard. I tend to think Groves can outbox Froch yet at the same time he can be drawn into a war. If Froch can take his punches again he can tire him out and beat him down the stretch like he did in the first fight. He’s going to have to avoid getting hurt by big shots though. Froch is going to have to throw a lot of punches at Groves to hurt him but Groves only needs to land one good one to hurt Froch. I think we see the end of this fight. Froch has always been a fighter that can brawl up until the final bell. The last few rounds will be big for him. I’m going with Froch to win a split decision over Groves. I think this is a good fight with back and forth action. It could end in a late stoppage for either fighter. Froch’s experience and endurance carries him to the victory.