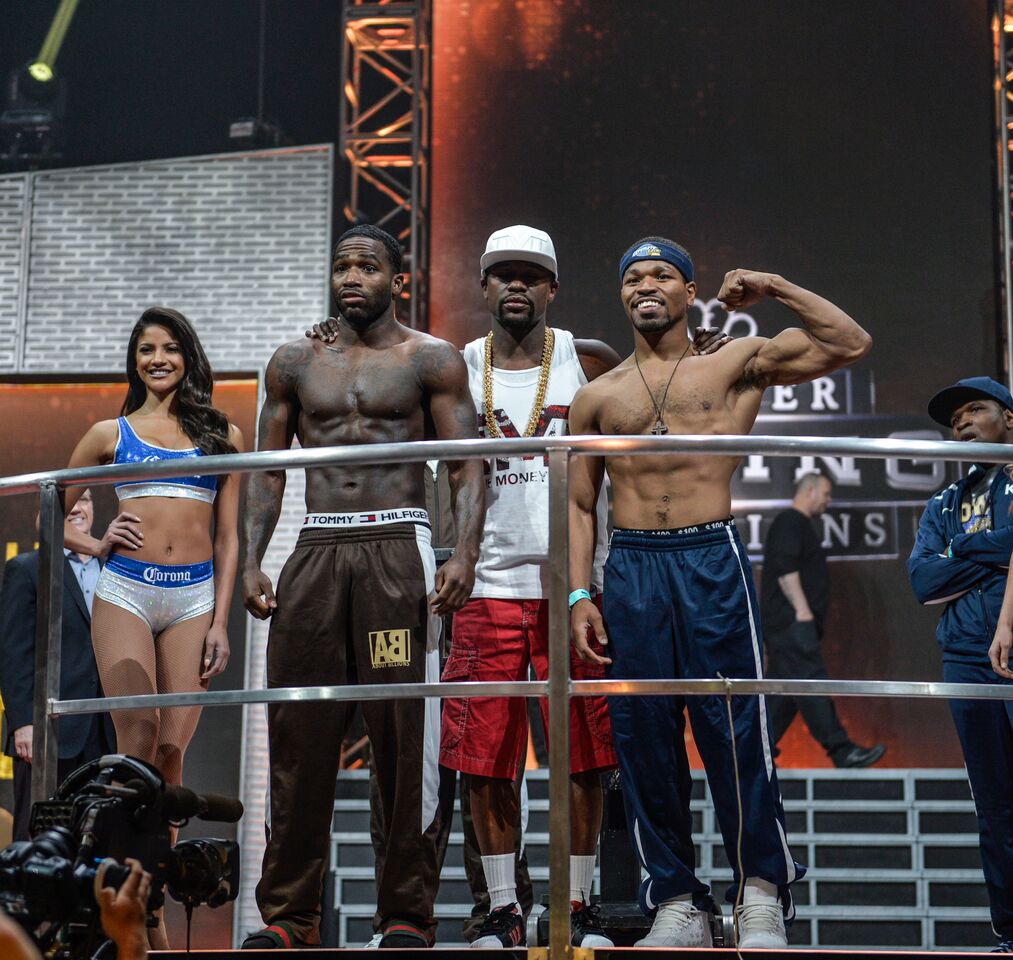 Tonight at the MGM Grand in Las Vegas, NV two of the top names in the welterweight division will square off on NBC. The lively Adrien Broner (30-1, 22 KO’s) will take on the aggressive Shawn Porter (25-1-1, 16 KO’s) in a welterweight fight that should be a great matchup. The card begins at 8:30pm EST on NBC.

When it comes to picking the winner of this fight I’ll admit that I have been back and forth on this one all week. That is usually the case when having to pick between a boxer vs puncher who’s talent levels seem about the same. One must always decide, will the boxer be able to out box the puncher? Judging always plays a key role in these type of fights as well. Will the judges favor aggression or boxing? Especially in a close round. Another situation with this particular fight is the weight. Who has the advantage now that there is no rehydration clause for Shawn Porter?

To better breakdown the fight I’ll set this up into three categories: Weight, Judging, and Fight Breakdown:

Shawn Porter said that this will be the first time he has fought at 144 since the early days of his amateur career. He always claims that he made the weight easily. By the look of his body and face at the weigh-in last night I believe him. Broner looked a little off though. The catch-weight and rehydration clause was put in place to give Broner an advantage against a much bigger guy. It would appear as though Broner messed that up. Word is they scratched Porter’s next day rehydration limit of 154 because Broner himself was going to come in higher than that. With a fully rehydrated Shawn Porter the advantage that Broner had going into Saturday night is now gone.

This will play a key part. Some judges favor clean effective punching over aggression while others vice versa. I can see some rounds where Broner lands the cleaner punches but Porter outworks him and lands some good ones of his own. These split rounds are going to be on the hands of the judges. Don’t be surprised if we get some crazy scorecards tonight with everyone all over the place. If Broner can’t keep Porter off of him then those close rounds will be interesting to judge. Porter loves to come forward, and even if he isn’t landing clean, some judges may favor that if Broner isn’t doing a good enough job of keeping him off. We could be looking at a split decision. I could also see one person scoring 116-112 for Broner while another 116-112 Porter. It could be that type of fight.

For Adrien Broner to get the nod tonight he’s going to have to box Porter’s ears off. Floyd Mayweather has been teaching him, and that’s how he is going to have to fight to win. He has to control the pace of the fight with distance and the jab. He can never be in one place to long. Moving is going to be key. Timing will be essential. He has to time Porter jumping in at him, get a fast combination off, and move out. Staying in front of Porter for to long or not moving his legs will get him in trouble. He also has to stay off the ropes. Broner has the better for work so my advice for him would be to use it. If he needs down time, stick that jab and move. He can’t let Porter think about what he is going to do. He has to fluster him with his movement.

For Shawn Porter, everything I said above he has to not let Broner do. He is going to have to smother him. Porter needs to cut the ring off on Broner, trap him in the corner and against the ropes, and unleash when he does. I also think that Porter should invest in the body early. Broner likes to stand in the middle of the ring sometimes with his chin tucked kind of like Mayweather does except Broner’s defense isn't nearly as good so he gets caught sometimes. Broner also likes to exchange toe to toe so Porter has to draw him into that type of fight. He should take a page from Marcos Maidana’s book. Don’t let off the gas. His him everywhere and anywhere as often as he can. The over hand right will be key for him. Broner doesn’t do a very job at blocking that punch. He might be able to drop him with it.

The biggest question for me is if Adrien Broner doesn’t have the power to keep Porter off of him then will he be able to box the entire twelve rounds with Porter pushing the fight? In the John Molina fight Broner boxed liked Mayweather. It was boring but he won. I think he plans to do the same tonight. However Shawn Porter is not John Molina. I’m not sure Broner has the power or ability to keep Porter off of him all night. He wasn’t able to keep Paulie Malignaggi off of him. Part of me thinks Broner displays a good Mayweather like style and pulls off the decision while another part of me thinks that Porter is going to walk through him and beat him like Maidana did. It’s a toss up, so I flipped a coin and I’m going with Porter.