FightNights.com 2017 Fight of the Year: Joshua vs. Klitschko 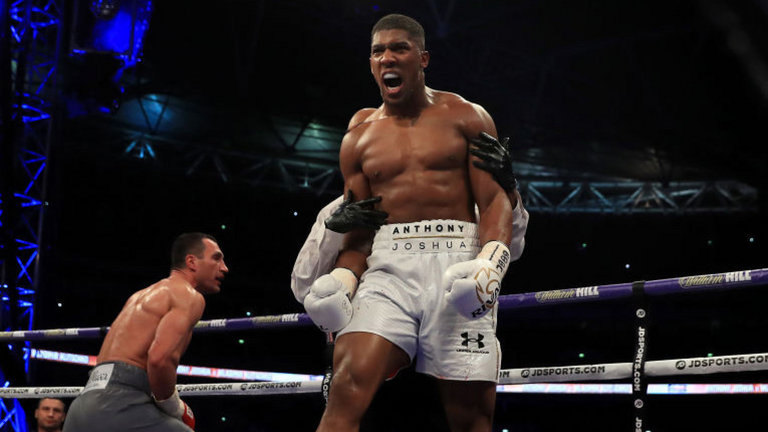 The heavyweight division has played host to the Fight of the Year 30 times prior to this year, or 40% of the time in a span of 75 years. None have come since 1996, however, with the aughties (2000s) joining the 1980s as the only Gregorian calendar-based decades in which the heavyweight division was shut out of the race.

A similar pattern developed through the first seven years of the 2010s. Then came along Anthony Joshua and Wladimir Klitschko.

Boxing fans sensed something special was in the air from the moment their crossroads bout was finalized at the start of 2017. Discussion for such a match had taken place months prior, with Nov. 26 and Dec. 10, 2016 both pitched as working dates. A deal wasn't reached in time for the bout to take place in 2016, perhaps destiny's way of saying the timing just wasn't right.

Everything about their April 29 clash was all that you can ask for in a major prizefight. Historians called it the most significant heavyweight matchup since Lennox Lewis dismantled what was left of Mike Tyson in their June 2002 battle which at the time set the mark as the highest grossing Pay-Per-View event in history. From a commercial standpoint, Joshua-Klitschko was even bigger—or so suggested the 90,000 in attendance at Wembley Stadium in London and a Sky Box Office-record breaking home audience purchasing the PPV event.

Those days are long gone for boxing, ironically with Klitschko's lengthy and dominant reign—while well-attended no matter where he fought—largely viewed as a buzzkill as his fights often lacked sustained action while the longtime World heavyweight champion was without divisional peer. The latter part was resolved when he was dethroned by Tyson Fury in Nov. '15, although in a miserably fought affair that boasted zero rewatchability.

A rematch was due to take place at two different points in 2016, only for Fury to take a forced, extended break from the ring to resolve ongoing mental health and substance abuse issues. All told, Klitschko was 15 months removed from the ring and 41 years old by the time he took on Joshua, a studly 27-year old heavyweight beltholder whose reign had just eclipsed one year as he was attempting his third title defense.

When all was said and done, they met at the perfect time at the crossroads.

The first few rounds weren't bursting with sustained action, but there was plenty of anticipation building with the sense that something big was about to come. Once it did, the fight took on a life of its own.

That very moment came in round five, when a barrage of punches put Klitschko down on the deck. Just twice before in his career was Klitschko able to recover from a knockdown to win a fight. He did so versus Davaryll Williamson in claiming a technical decision win in Oct. '04, and then rising from three knockdowns to otherwise soundly outpoint Samuel Peter in their Sept. '05 title eliminator. He managed to peel himself off the canvas here, somehow mustering up the strength to not only recover but seize control during the final minute of arguably the best round of 2017.

It was hardly the last memorable part of the evening.

Joshua found himself on the canvas for the first time in his career in round six, hitting the deck after getting caught with a monster hook. The young lion beat the count, a sequence which ultimately signaled Klitschko's last chance at reclaiming old glory. It never stopped the crowd from getting all the way behind the pair of ring gladiators, both mustering every drop of energy left in their massive frames in their best efforts to knock the other unconscious.

The two spent the next four rounds building a foundation for a spectacular finish. When all was said and done, it was Joshua—who'd seen the eighth round of a prizefight for the first time in his career—who would deliver the type of storybook ending his faithful Londoners could forever cherish. That moment came in round 11, which turned out to be the last of Klitschko's storied career. Separate combinations felled the former heavyweight king twice in the round, the latter prompting the referee to halt the contest much to the delight of the partisan crowd on hand.

It was only fitting that the same city which hosted Joshua's Olympic Gold medal haul in 2012 would also serve as the home to the biggest win of his career, a victory that would see his brand soar from rising star to perhaps the world's biggest draw.

Once upon a time, it was mandatory for the heavyweight champion to carry such status. A fight like Joshua-Klitschko was the perfect throwback to such times, when the world held its breath in anticipation of the next great event in boxing's most storied division. Thanks to their extraordinary efforts on April 29, the heavyweight division for the 31st time in history—and the first time since 1996—was able to lay claim to the Fight of the Year.

Srisaket Sor Rungvisai-Roman 'Chocolatito' Gonzalez I (March 18, 2017)—If you were to watch these bouts one after the other without any regard of significance and magnitude of each event, there's a case to be made for this fight winning top honors. Whereas Joshua-Klitschko—a massive event in and of itself—took a few rounds before getting to the non-stop action part, Sor Rungvisai-Gonzalez—the chief support to Gennady Golovkin's narrow win over Daniel Jacobs at Madison Square Garden—was chock full of memories from the opening round. Two minutes into the evening, Gonzalez hit the deck for the first time in his career when a body shot forced him to stumble and tip over. It's been argued by many that what he was able to accomplish over the remaining 11 rounds should've been more than enough to atone for the 10-8 first round and win a decision. Instead, two of the three judges liked Sor Rungvisai's aggression—so too did the fans, not in scoring but in terms of what it was able to bring out in Gonzalez, the pound-for-pound king at the time who for 12 rounds of mayhem was finally met with a relentless peer.

BEST OF THE REST

Badou Jack-James Degale (January 14, 2017)—The year's first true Fight of the Year contender was, sadly, without a victor. Many believed it should've been Jack, who overcame an opening round knockdown to go tooth and nail with Degale, whom he dropped in the 12th and final round. Their non-stop slugfest was just what the super middleweight division needed—although a unified champion that it'd ultimately hoped for went unrewarded when a majority draw verdict was handed down.

Takashi Miura-Miguel Roman (January 28, 2017)—Roman found himself on both ends of Fight of the Year entrants, the first on the year in such frightening losing fashion that it was a wonder if he'd ever again return to contention. Miura was in hot pursuit of a crack at a second world title reign, storming through hell in the form of middle rounds punishment to rally late and thrice drop Roman before forcing a stoppage at 0:53 of round 12, slightly ahead on all three cards at fight's end.

Ivan Baranchyk-Abel Ramos (February 10, 2017)—One of two entrants on the list to come from Showtime's ShoBox series, although this bout is the only to fall in line with the series' traditional roots. The pair of super lightweight prospects traded knockdowns in round three and Baranchyk managed to force Ramos to the canvas once again round four in taking a well-earned 10-round decision that was a lot more competitive—and fun—than the wide scores suggested.

Dominic Breazeale-Izaugbe Ugonoh (February 25, 2017)—Yet another memorable heavyweight encounter featuring multiple knockdowns. The supporting bout to heavyweight titlist Deontay Wilder's stoppage victory over Gerald Washington easily stole the show in their Fox-televised event at Legacy Arena in Birmingham, Alabama. Breazeale—who'd been knocked out by Joshua in his previous ring outing in June '16—was dropped in round four and his vision compromised from a left eye rapidly swelling shut. The far-too-brave California heavyweight dug deep in round five, flooring Ugonoh and handing the Polish heavyweight his first loss after a left-right combination put him through the ropes and onto the canvas in forcing the end of the night at 0:50 of round five.

David Benavidez-Ronald Gavril I (September 8, 2017)—What a way to fight for a vacant title! Benavidez became the youngest champion in super middleweight history at just 20 years old. He had to walk through a swarm of punches in outworking Gavril, but suffered one last scare in the form of a 12th round knockdown before taking a split decision and a super middleweight title.

Gennady Golovkin-Canelo Alvarez (September 16, 2017)—Much like Joshua-Klitschko, this was a moment in which the ring action lived up to the massive magnitude of the event. The long-anticipated World middleweight championship proved well worth the price of admission, even if the final scores and controversial draw verdict garnered as much attention as the fantastic 12 rounds of action.

Miguel Roman-Orlando Salido—Just over 10 months after having the fight beaten out of him in a California desert ring live on HBO, Roman managed to beat the fight out of Salido in a Nevada desert ring live on HBO. Salido struck first, rocking Roman with a right hand in the opening round. The former two-division champ was unable to preserve his early lead however, attributing the relinquishing in momentum to Father Time remaining unbeaten. Not helping his cause any was a fully-recovered Roman, who floored Salido three times before beating the fight out of him by round nine, enough to where Salido initially called it a career.