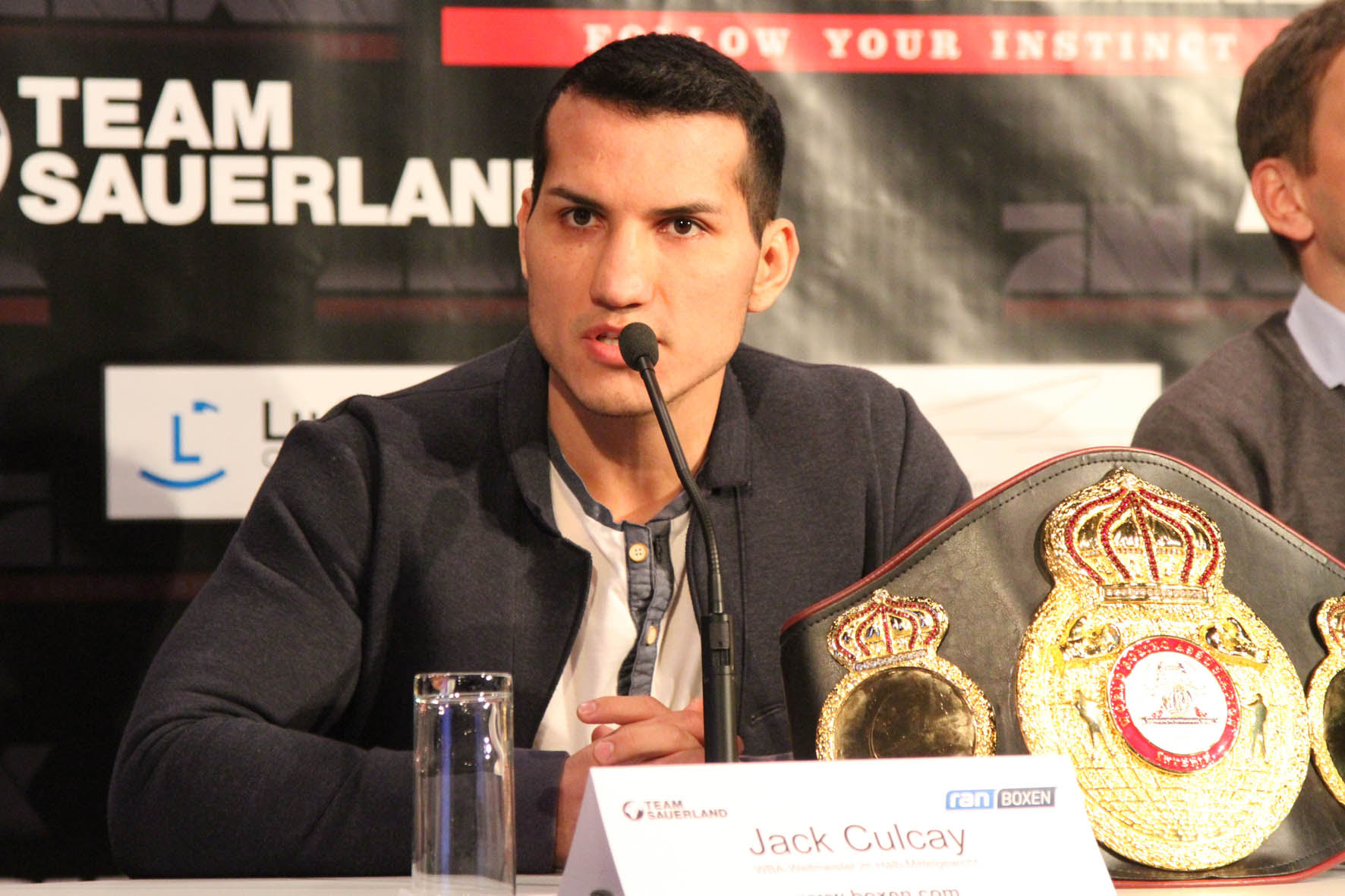 The matchup itself was already months in the making, so it was safe to assume there was plenty on which to catch up between Germany's Jack Culcay and Demetrius Andrade. The past they discussed, however, went way beyond their previously scheduled fallout.

The pair of 2008 Olympians - Culcay representing Germany and Andrade the United States - are due to collide on March 11 at the Friedrich-Ebert-Halle in Ludwigshafen, Germany. Culcay's WBA super welterweight strap will be at stake in a matchup originally due to take place last November, only for the bout to have never been signed and for a fresh purse bid ordered in rescheduling the mandatory title fight.

Both purse bids were won by Sauerland Event - Culcay's promoter - edging out Andrade's co-promoter Banner Promotions on each occasion. This time around, however, the boardroom victory was followed up by a press conference, confirmed fight date and venue and signed bout agreements.

As an official press conference was never held for the last go-round - nor a real explanation ever offered - Friday's kickoff session was the first time the combatants were able to meet face-to-face - sort of. As the session was held in Ludwigshafen, Culcay - who lives in Darmstadt, roughly 45 minutes north - was on site while the Providence (Rhode Island, U.S.)-based Andrade appeared via live stream.

The follies that went into the previously intended Nov. '16 pairing falling by the wayside was expected to serve as the topic of conversation. Instead, the two traded tales over their previous meeting in the 2007 World Amateur Championships, where Andrade (23-0, 16KOs) soundly outpointed Culcay in the quarterfinals en route to claiming top honors in the tournament.

Clearly, the manner in which he was defeated 10 years has never sat well with the now defending super welterweight titlist.

"Last time we fought at the Amateur World Championships in Chicago the judges clearly favoured the home fighter," said Culcay (22-1, 11KOs), who makes the third defense of his alphabet title. "They gave him point after point when in reality it was a really close fight for the first two rounds. He beat me and won the gold that year, but now it’s my time for revenge."

"We will be fighting on a level playing ground in Germany and I will prove I am one of the best boxers at 154 lbs."

The latter part is actually a status often attributed to Andrade, a former titleholder was stripped in part due to the ugly side of boxing politics but whom remains one the biggest threats in a loaded super welterweight division. The 27-year old southpaw has always shown such potential for excellence well before his pro years in serving as one of the top amateurs in the world.

Accentuated on his stellar resume was the year he enjoyed in 2007, both winning the World Amateur Championships and qualifying for the U.S. men's boxing team that eventually competed in the 2008 Beijing Olympics. As great as he was as a 19-year old top amateur, the promise he made is that Culcay - who was 21 at the time - will see a far superior product to the one who already holds a past decisive victory in their rivalry.

"Hey Jack, remember 2007," Andrade quipped in response. "Back then we were just two young guys, greenhorns without much power, but I already made easy work of you. This time we’re grown men with punches that can hurt badly.

"You better get ready to be dominated again. Boo Boo is going to make your World title disappear!"

Naturally, the 'fighting words' (shoutout to friend and former BoxingScene.com colleague David "Twinkle Fingaz" Greisman) between forthcoming combatants - whose showdown takes place just one month from this Saturday - were well-received by the staff at Sauerland Event, whom of course would love to sell out the venue come fight night.

"This is one of the most hotly anticipated fights to take place on German soil for many years," said promoter Kalle Sauerland, perhaps with a touch of hyperbole; nevertheless, still a top-shelf matchup. "It is an exciting match up. Both men have reached the pinnacle in amateur boxing and have won World Championships as professionals. No doubt, their amateur history will add extra spice to the battle.

"March 11 is judgment day, and we will see if it is repeat or revenge?’’