Golovkin, Jacobs Both Within Limit For WBC 30-Day Weight 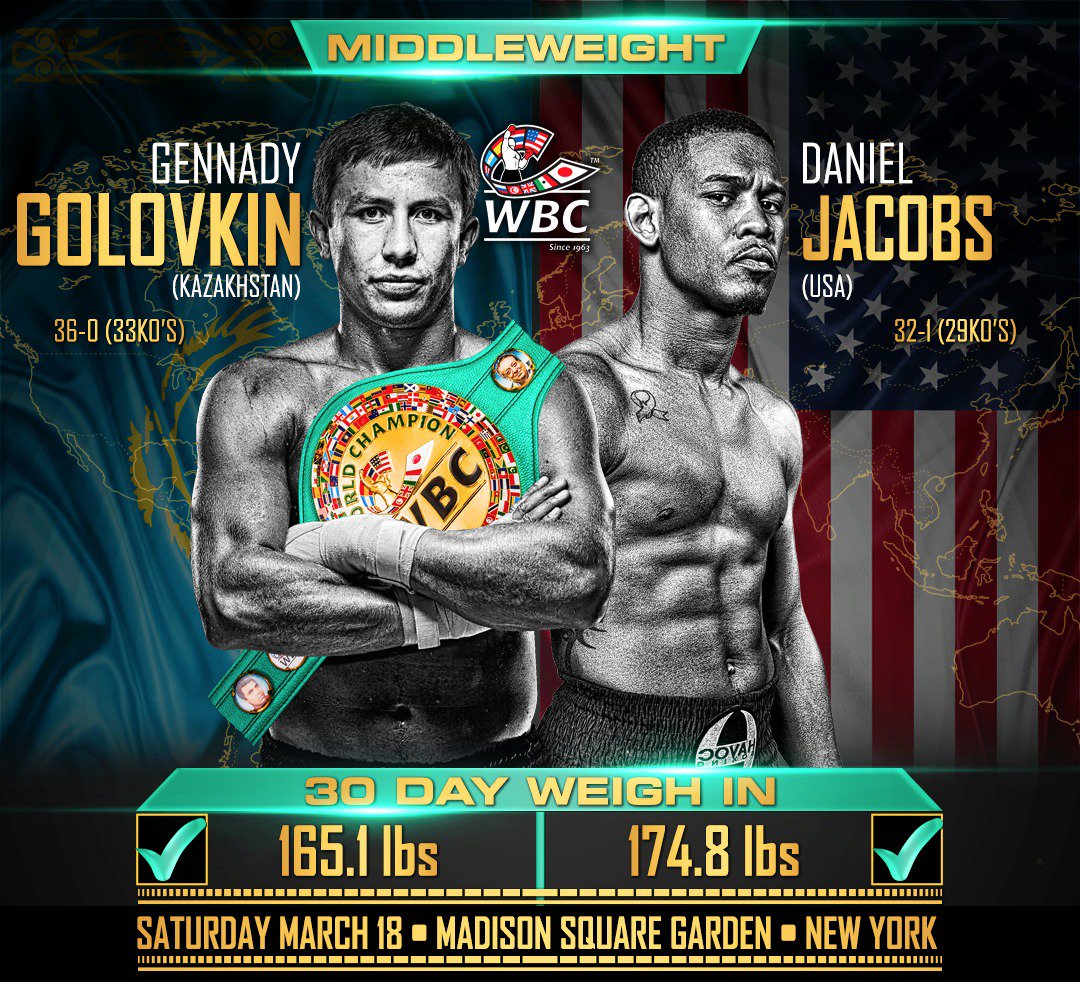 It remains to be seen what happens on fight night, but history once again repeats itself in the way of a Gennady Golovkin 30-day safety weight check.

The unbeaten, unified middleweight titlist is well on course to hit the middleweight mark for his March 18 HBO Pay-Per-View headliner versus mandatory challenger and secondary titlist Daniel Jacobs. With the World Boxing Council (WBC) among the slew of sanctioning bodies with a belt at stake in this contest, both boxers are required to participate in the organization's mandated 30- and 7-day safety weight checks.

The purpose of the pre-fight safety weight checks is to ensure that athletes aren't cutting excess weight in rapid fashion during any point in training camp. Boxers who participate in WBC-sanctioned events cannot weigh more than 10% above the contracted limit 30 days out, and no more than 5% above the said mark seven days prior to fight night.

With just five pounds to go before he hits 160, Golovkin (36-0, 33KOs) is within the range that has preceded his previous three title defenses. The 34-year old knockout artist - who captured Olympic Silver for Kazakhstan in the 2004 Athens Olympics - weighed 165 lbs. 30 days ahead of his eventual 5th round knockout of Kell Brook last September; 164 lbs. at the 30-day mark prior to his two-round destruction of overmatched mandatory challenger Dominic Wade last April; and 165 lbs. at a similar point going into his unification clash with David Lemieux, whom he stopped in eight rounds in Oct. '15.

Equally consistent is the 30-day weight of each of Golovkin's last four opponents. Jacobs is a shade lighter in weight than was Brook (176 lbs., despite coming into the bout as a career-long welterweight), Wade (175.6) and Lemieux (175.8). While all were within the tolerable limit, there is a sense that the duration of camp for each of the aforementioned - as will also be the case with Jacobs - becomes more about training to lose weight than to fight.

Regardless, Golovkin remains a sizable betting favorite heading into what will be the 18th defense of at least one alphabet title, amidst a reign that dates back to Aug' 10. He is just three successful defenses shy of tying the divisional mark established by Bernard Hopkins, whose historic title reign covered 20 defenses spanning ten years from April '95-July'05.

The last win for Golovkin came in September with his aforementioned triumph of Brook. The seven month gap between ring appearances is the longest of his career, which is coming up on 11 years deep in May. Once a model for ring activity in an era where athletes seem content with fighting 1-2 times per year, he has been forced to slow down due to a shortage of willing middleweight titlists, contenders and pretenders willing to share ring space with the fire-breathing knockout artist.

Most of Golovkin's 2016 campaign was spent wasting time on the collective trio of Saul 'Canelo' Alvarez, Billy Joe Saunders and Jacobs. Alvarez entered the year as the reigning World (lineal) middleweight champion, but also carrying a WBC belt that came with Golovkin as his mandatory challenger. The wildly popular Mexican boxer repeatedly insisted that the two would eventually dance, even inviting him into the ring following his 6th round knockout of welterweight Amir Khan in their 155-pound catchweight last May and promising his fans that a date with the Kazakhstani was up next.

Alvarez instead pulled a U-turn, dropping back down in weight to fight for - and reclaim - a 154-pound title.

Saunders gave his Twitter fingers a workout, repeatedly calling out Golovkin through social media, only to disappear anytime it came to move to the contract stage. The unbeaten WBO titlist spent most of the year on the injured list, returning late in the year in posting a pedestrian win that - to his credit - was followed by his own admission that more work needed to be done before calling out the division's very best.

Following his win over Brook in his UK debut, Golovkin turned his attention to Jacobs, hoping to get his mandatory title defense out of the way and squeezing in a third fight in 2016 as HBO set aside a mid-December date on its flagship network for the occasion. There was no such luck, as Jacobs' side dragged out talks and successfully postponing WBC-ordered purse bid hearings several times before a deal was finally struck to appease both sides.

The financial terms, however, meant taking the fight to what has become a oversaturated PPV market. Jacobs (32-1, 29KOs) will make his debut in a PPV main event, entering the show seven months following a 7th round stoppage of Sergio Mora in their rematch last September.

Between the two comes an impressive combined knockout stretch. Jacobs has seen his last 15 bouts end inside the distance - 14 knockout wins and his lone defeat coming in a July '10 5th round stoppage loss at the hands of Dmitry Pirog. The last time he has been forced to go to the scorecards was in an Aug. '09 decision win over Ishe Smith.

It's been one year longer since scorecards were required to declare Golovkin a winner in a pro bout. His June '08 eight-round points win over Amar Amari has since been followed by 23 consecutive victories inside the distance, having never seen the 12th round of any pro contest and extended beyond round nine just twice in his 11-year career, both in title fights.

Kassim Ouma is the proud owner of Golovkin's toughest challenge to date, the faded veteran and former 154 lb. titlist going tooth and nail before succumbing in the 10th round of their June '11 clash. Just shy of three years later, Martin Murray took Golovkin into the 11th round of their Feb. '15 battle.

The latter clash marked the lone time that Golovkin has outweighed an opponent at the 30-day mark, having checked in at 172 lbs. while Murray - strangely the naturally bigger boxer - tipped the scales at 169 lbs. Both combatants unofficially weighed 170 lbs. on fight night.