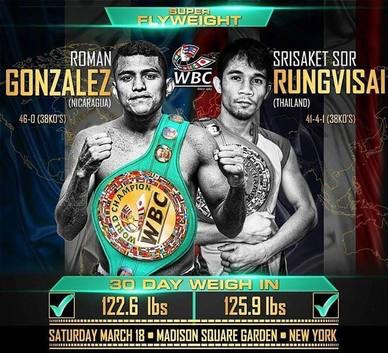 Gonzalez came in at 122.6 lbs. at the 30-day mark for the first defense of his 115-pound crown. Sor Rungvisai barely cleared the tolerable limit, weighing 125.9 lbs. in pursuit of a second title reign.

The WBC mandates that all participants must weigh no heavier than 10% above the contracted limit 30 days ahead of a sanctioned bout, and no more than 5% above said linit seven days out.

Gonzalez and Sor Rungvisai were both required to come in at 127 lbs. (10% above 125, rounded up to the nearest full pound) or less during the February 18 safety weight check. They will have to weigh no heavier than 121 lbs. by March 11 for the seven-day check-in.

Gonzalez (46-0,38KOs) is widely regarded as pound-for-pound best boxer in the world. The diminutive Nicaraguan solidified that stance in capturing a world title in a fourth weight class last September, claiming the super flyweight title in a war of a 12-round decision over previously unbeaten Carlos Cuadras.

Shortly thereafter, Gonzalez vacated his World flyweight crown to remain at the new weight. He'd also previously served as a titlist at strawweight and junior flyweight.

Sor Rungvisai (41-4-1, 38KOs) enjoyed a brief title reign before losing his crown to Cuadras in May '14 on the road in Mexico. The 30-year old Thai southpaw has since won 14 straight, including a 4th round knockout of Jose Salgado in their May '15 title eliminator that was designed to set up a rematch with Cuadras.

Seven of his wins among his current win streak have come since beating Salgado, having agreed to step aside to allow Gonzalez-Cuadras to take place last September. The concession came with the promise of getting the winner, that moment now tied into his U.S. debut.