Charlo vs. Hatley Added To 4/22 Porter vs. Berto Brooklyn Bill 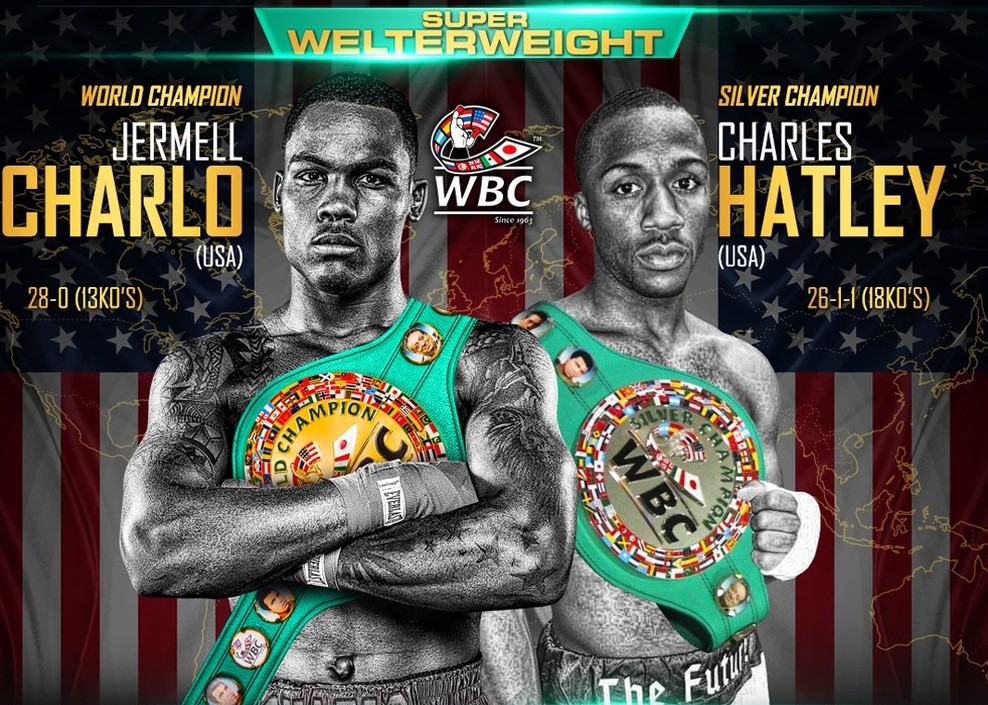 Four boxers whom have been stuck in limbo have finally received their marching orders.

On the pine since winning a major belt last May, Jermell Charlo will make the first defense of his super welterweight title versus mandatory challenger Charles Hatley. The bout was confirmed by Premier Boxing Champions (PBC) staff, who on Friday announced the bout as part of a Showtime-televised doubleheader which takes place April 22 at Barclays Center in Brooklyn, New York.

The bout serves in chief support to a main event in the form of a pivotal crossroads bout between former welterweight titlists Shawn Porter and Andre Berto. The winner will be guaranteed a future title shot at unified welterweight titlist Keith Thurman.

Charlo (28-0, 13KOs) has been chomping at the bit to prove his worth as a reigning titlist in one of the deepest divisions in the sport today. The Houston native made history in winning his belt in a come-from-behind stoppage win over John Jackson last May in Las Vegas. In doing so, he and Jermall Charlo became the first set of twins in boxing history to simultaneously hold titles in the same weight division.

"I'm once again ready to get in the ring and continue to build my legacy,” said Charlo. “I've been training hard, I'm focused and I'm even hungrier now that I have my belt. Charles Hatley has never been in the ring with someone like me and I'm going to do what's necessary to get that win. "

The 'someone like me' part isn't entirely true when it comes to Hatley, who managed to share ring space with Jermall - though just not in the boxing sense. Jermall defended his belt that same evening, outpointing Austin Trout but not before nearly encountering another fight that evening. During the post-fight interview, he was approached by Hatley, who along with his "promoter" Don King mistook the defending titlist for Jermell, for whom he became the mandatory challenger following an 11th round stoppage of Anthony Mundine in Nov. '15.

“I’ve been training for a long time for this fight and I can’t wait to get in the ring,” said Hatley, who hasn't fought since the aforementioned win over Mundine. “I never stopped training since my last fight and I’m going to be ready to win that world title on April 22.

"Jermell is a good fighter, but he’s got a big mouth. I know we’re both training hard and going for the win, but I’m going to come out victorious.”

While he and his brother made history, their careers are no longer joined at the hip. Jermall added a knockout win over previously unbeaten Julian "J-Rock" Williams last December before vacating his 154-pound title earlier this year in favor of a run in the middleweight division.

Now it's up to the "younger" twin to continue the family legacy in what has become a stacked super welterweight division.

"The 154-pound division is very hot right now, and Jermell Charlo is one of the best and most exciting fighters in the weight class," said Lou DiBella, President of DiBella Entertainment, whose company will promote the event. "Charlo making the first defense of his WBC world title against a worthy challenger like Charles Hatley is a terrific addition to this card on April 22, at Barclays Center, televised by SHOWTIME. It's also fun to have Hatley's promoter Don King around. Only in America!"

Charlo and Hatley were ready to throw down earlier this year, as the two were scheduled to meet on March 11 at the newly-erected MGM National Harbor Casino in Oxon Hill, Maryland. The card fell apart when the evening's headliner, locally based Gary Russell Jr. saw his featherweight title defense fall apart due to his opponent, mandatory challenger Oscar Escandon suffering an injury during training camp.

The bout once again serves at the mercy over the status of another. For now, though, it represents a strong lead-in to a headliner between scrappy veterans as a pair of former champs look to make one last run towards a second title reign.

Porter (26-2-1, 16KOs) has been out of the ring since a close points loss to Thurman in their welterweight title fight thriller last June, which aired live on CBS in primetime. The bout was his long ring appearance since a win over Adrien Broner 53 weeks prior, the second of two wins following his title-losing effort to Kell Brook in Aug. '14.

The Ohio-bred, Las Vegas-based welterweight was in pursuit of any welterweight willing to take his phone calls, including a long-desired rematch with Thurman. Ten months after his last ring appearance, he gets to return against the one guy who accepted his challenge.

Berto (31-4, 24KOs) will have been out of the ring for 51 weeks by the time the opening bell sounds. The squat former titlist was last seen rallying to knock out Victor Ortiz in a revenge-fueled rematch last April live on Fox TV in primetime. The win avenged a title-losing effort to Ortiz in their multi-knockdown April '11 thriller, with Berto's career playing out like a yo-yo ever since watching his title reign come to an end. He is 4-4 in his last eight starts, but has scored wins in three of his last four ring appearances with the lone loss coming at the hands of all-time great Floyd Mayweather in what for now remains the last bout of a historic career.

There is plenty of competition on this particular evening for all boxers, not just the opponent in front of them but world class talent all looking to emerge as the standout talent of the night. More motivating to Charlo, however, is looking to keep pace and eventually outdoing his twin brother.

"My brother had an outstanding performance against Julian Williams and I want to compete with that," Charlo notes of the last victory his family has posted. "It's motivated me and I'm ready to get out there and show off my power and skills."