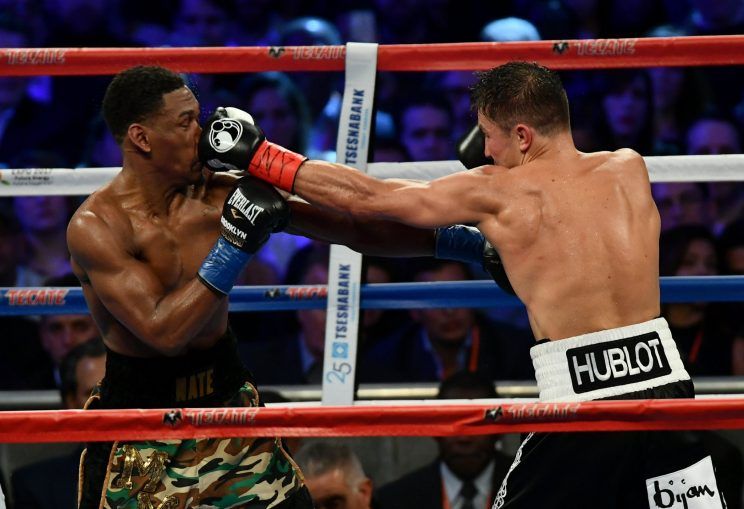 With all things relative, Gennady Golovkin's recent middleweight title defense versus Daniel Jacobs proved to be a successful defense.

It wasn't a night for the record books, but the March 18 HBO Pay-Per-View event cleared a healthy pull on the dial and at the box office. The telecast - which aired live from Madison Square Garden in New York City - sold 170,000 units, a figured first reported by Yahoo! Sports senior writer Kevin Iole and since confirmed to FightNights.com by Tom Loeffler, managing director of K2 Promotions.

The combined revenue between PPV sales and box office receipts pushes gross sales at or near $15 million, a sizable take given that none of the evening's participants have emerged as established stars in the PPV market. Golovkin (37-0, 33KOs) - who won by unanimous decision to register his 18th successful title defense but whose 23-fight knockout streak came to an end - had previously headlined just one other PPV event, his Oct. '15 title-unifying 8th round knockout of David Lemieux, That event also took place at Madison Square Garden, in front of a sold-out crowd of more than 20,000 and moving 153,000 PPV units.

Jacobs (32-2, 29KOs) appeared in his first PPV headliner, having only previously served in supporting capacity in past undercards.

The evening's co-feature saw Roman 'Chocolatito' Gonzalez suffer his first loss, resulting in the end of his super flyweight title reign and stay atop the mythical pound-for-pound rankings. The now former four-division champ from Nicaragua landed on the wrong end of a debatable decision loss to mandatory challenger Srisaket Sor Rungvisai, which marked Gonzalez' second PPV appearance. His lone other stint also came on the aforementioned Golovkin-Lemieux event, scoring a late-round stoppage of former two-division titlist Brian Viloria in his first-ever bout at Madison Square Garden.

K2 Promotions declined to comment on a break-even point, but the $11-plus million in PPV sales is a safe bet to have satisfied all purse demands and then some after the necessary cut to HBO (as the distributor and producer) as well as cable and satellite providers who carried the event.

The 170,000 units sold is hardly number over which to perform backflips, but is a healthy result considering it went head-to-head with "March Madness", the NCAA college basketball tournament which ran live on CBS, TBS, TNT and truTV. Also taken into consideration is the ridiculous level of piracy that exists in today's boxing market, with Facebook's Live feature making it all too simple to share such events. While it's difficult to determine how many additional viewers would have purchased the event in the absence of an illegal feed, it certainly doesn't help on the promotional end.

As much was evident with two PPV events last November. There were nearly as many viewers through Facebook Live alone as there were the number of subscribers who purchased the telecast that saw Manny Pacquiao become a four-time welterweight titlist in his ring return following a wide points win over Jessie Vargas. Later that month, Andre Ward's disputed decision victory over Sergey Kovalev suffered in the PPV market, in part due to neither boxer previously appearing in a PPV main event but also due to the size of the audience who instead chose to view the event through illegal means.

Nevertheless, the confirmed number on its own will undoubtedly be used as leverage in ongoing - and struggling - efforts for Golovkin to land a superfight with Saul 'Canelo' Alvarez. Talks have dragged out for more than a year, with both boxers taking interim bouts over that course while circling around one another. Oscar de la Hoya, whose Golden Boy Promotions boasts Alvarez as by far its biggest star, has insisted to anyone who will listen (or believe him) that he has targeted September 16, 2017 for such an event to take place.

Before they get there, Alvarez will need to get past longtime rival, countryman Julio Cesar Chavez Jr. The May 6 catchweight bout has already sold out the T-Mobile Arena, further establishing the red-headed superstar as boxing's biggest attraction in North America. Such leverage is not lost on de la Hoya, who has since gone on record to complain of Golovkin's intention to pursue a June 10 showdown with unbeaten Billy Joe Saunders. The bout would take place in Golovkin's native Kazakhstan and would be for all four major middleweight belts - Golovkin currently own the WBC, WBA and IBF titles, while Saunders has reigned as WBO titlist since a Dec. '15 points win over Andy Lee.

Should that bout take place, de la Hoya has expressed concern of the risk that comes with trying to market a September 16 event. The promotional campaign is contingent upon Alvarez winning on May 6 and escaping without injury, but due to begin shortly thereafter.

The concern on Golovkin's side is that his 2016 ring campaign was stuck in limbo, waiting on an Alvarez fight that never happened and then watching negotiations with Jacobs drag on for more than three months. Alvarez and Golovkin were both due to appear in separate HBO-prime telecasts last December, but those plans were scrapped after Alvarez suffered an injury in his 154-pound title winning knockout of Liam Smith last September which put him out for the remainder of the year, along with the aforementioned struggles to get Golovkin and Jacobs to agree to all terms.

All told. Golovkin fought just twice in 2016 - scoring knockout wins over Dominic Wade and welterweight titlist Kell Brook - and is looking to avoid a repeat in this calendar year.