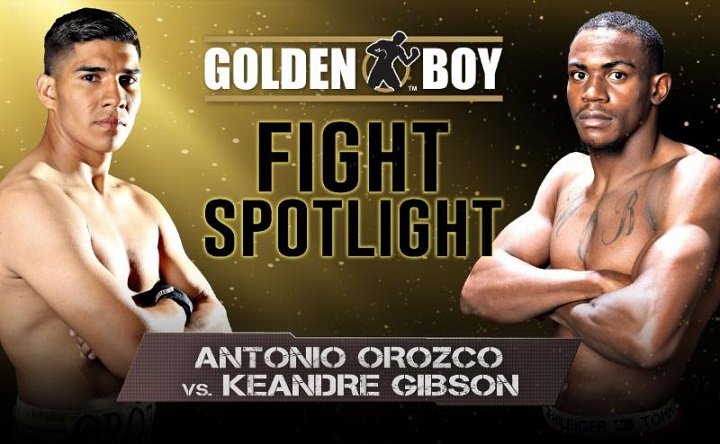 Ironically, it took for Antonio Orozco to pass on a title opportunity to prove that he's ready for contention.

The unbeaten Californian added to a steadily improving resume with perhaps his best career win to date, stopping previously undefeated Keandre Gibson in the 4th round of their ESPN2-televised headliner Saturday evening at The Cosmopolitan in Las Vegas, Nevada.

What appeared to be a pick-'em fight on paper instead proved the surprisingly wide pre-fight odds accurate. Orozco spent the early portions of the evening measuring up Gibson, who came racing out the gate upset-minded. The surge from the St. Louis-based prospect didn't last for very long, as his boxing skills were quickly offset by his opponent's natural power and aggression.

From there, it was hardly a contest as Orozco quickly seized control. The closest thing to a competitive fight from that point onward was when both boxers received a tongue-lashing and final warning from referee Russell Mora for what appeared to be intentional low blows by each combatant. It was all that Orozco needed to hear as he not only put the fight out of reach the rest of the way, but eventually turned out the lights.

A perfectly timed combination caused Gibson to face-plant to the canvas. He somehow beat the count, but was unable to convince the referee that he was in any condition to continue in suffering his first career loss (16-1-1, 7KOs).

The official time was 1:31 of round four.

Orozco improves - in every sense of the word - to 26-0 (17KOs). The San Diego native is the mandatory challenger to reigning World 140-pound king Terence Crawford, but declined to cash in on that status at least just yet. His step aside paved the way for 2008 Olympic Gold medalist Felix Diaz to instead take a shot at the crown, as he is due to face Crawford on May 20, with their bout to air live on HBO from Madison Square Garden.

If he wants it, Orozco would have first dibs at the winner although there has been talk of the 29-year old possibly being steered toward what would be a WBC Silver title fight versus Amir Imam to determine a final mandatory contender. For now, he posts a significant victory to add to a list that includes Martin Honorio, Stevie Forbes, Emmanuel Taylor and Humberto Soto.

In the evening's co-feature, Mercito Gesta shook off 18-months worth of ring rust to post a 10-round unanimous decision victory over Gilberto Gonzalez.

Scores of 96-93, 98-92 and 99-91 didn't serve any justice to a highly competitive bout, with the two wide scores not even reflecting the lone knockdown scored on the night, Gesta was dropped in round three and rocked again in round eight, while Gonzalez was forced to contend with a cut over his eye and a bloodied nose as the two boxers left it all in the ring over 10 thrilling rounds.

Gesta advances to 30-1-2 (16KOs) in posting his first victory since Oct. '15 - on the same night in which Orozco outpointed Soto in an HBO-televised appearance. Gonzalez - who had developed a nice reputation as a spoiler in recent years - snaps an eight-fight win streak as he falls to 26-4 (22KOs).

Both bouts aired live on ESPN2 as part of the newly developed Golden Boy Boxing on ESPN series which debuted in late March.