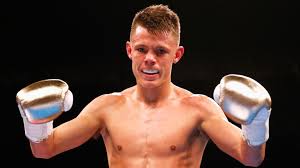 A super lightweight title unification bout is in store as local hero and three-division titlist Ricky Burns welcomes the challenge of unbeaten beltholder Julius Indongo. Their scheduled 12-round showdown will take place in front of a sold-out crowd The SSE Hydro in Glasgow, Scotland.

In the chief support (currently underway), Charlie Edwards was made to look brilliant in a 12-round shutout of Iain Butcher in their 12-round super flyweight battle.

A bit of controversy preceded the affair, as Butcher - a career bantamweight - tried and failed twice to meet the 115-pound super flyweight limit, and thus was ineligible to claim the vacant title at stake. His pre-fight status proved moot, as he barely won a minute, never mind a round as Edwards fought with a lot prove, particularly that he deserves to be back on the major title stage.

The ring novice - who only turned pro just over two years ago - was rushed to a flyweight title when the opportunity presented itself to face reigning champ John Riel Casimero last September. It was a learning experience at best, but in reality clear proof that there was more work to be done before Edwards returns to such a level of competition.

Saturday's affair with Butcher was a massive leap in the right direction, as he worked sharply behind a jab and virtually shut down his opponent's attack over the long haul. The outcome was never in doubt as the 24-year old improves to 10-1 (4KOs), having now won two straight following the lone loss of his career. Butcher falls to 16-3 (5KOs), with a return to bantamweight very likely in his future.

Josh Kelly enjoyed a successful pro debut, although not necessarily an overwhelming one as he scored a six-round points win over Jay Byrne (4-2). The lone score of the bout from referee Darren Maxwell - as is the case for non-title bouts staged in the United Kingdom - read 59-55 in favor of Kelly, who fought as a welterweight for Great Britain in the 2016 Rio Olympics and now campaigns as a super welterweight in the pro ranks.

His Olympic teammate, Lawrence Okolie scored his second 1st round knockout in as many pro fights. The heavyweight (201-pound limit in the amateurs) representative for Team Great Britain in the 2016 Rio Olympics - now competing as a cruiserweight - was sloppy yet effective in dispatching Lukasz Rusiewicz. Two knockdowns were followed by an ensuing volley that prompted referee Victor Loughlin to halt the contest at 2:36 of round one.

Even in ending inside of three minutes, it went considerably longer than Okolie's pro debut which lasted all of 20 seconds. The 24-year old is due to return April 29 on the Anthony Joshua-Wladimir Klitschko undercard at Wembley Stadium in London (as is Kelly), giving him three pro fights in just over one month's span to start his career.

A major upset came deep in the undercard, as Robbie Barrett survived two knockdowns to score a stunning majority decision win over Scotty Cardle. Michael Alexander's tally of 114-114 was overruled by judges Victor Loughlin (114-112) and Steve Gray (115-113) who thought Barrett (15-2-1, 1KO) did enough to pick up the British lightweight title, as well as the biggest win of his career to date. Cardle (21-1-1, 7KOs) sees his title reign at one and done in suffering his first career loss.